The most prominent parts of the Republican National Convention are coming to Jacksonville, including President Trump's acceptance speech 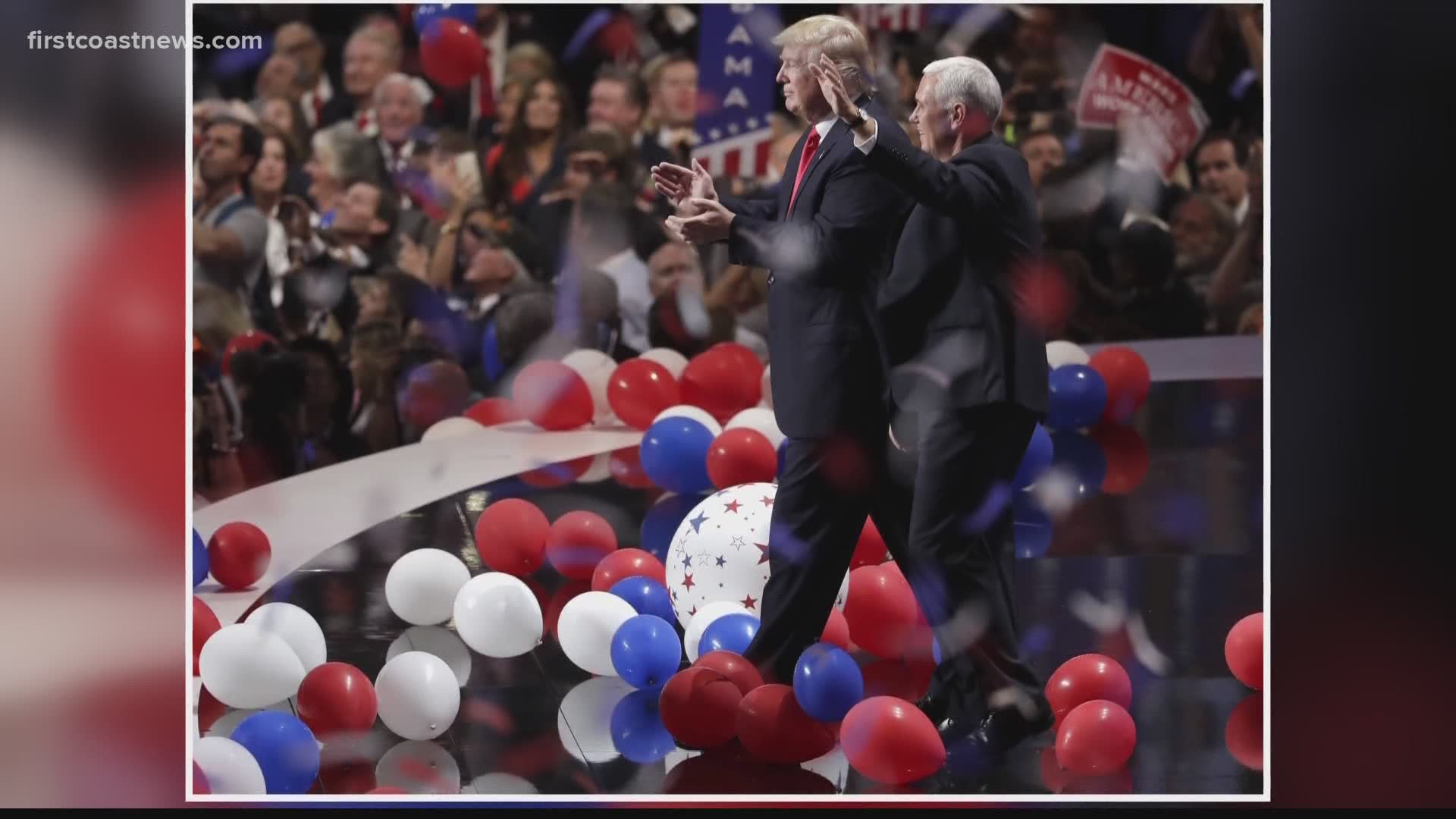 Jacksonville is going to be in the national spotlight in late August as the River City hosts major parts of the Republican National Convention for the first time. It's also the first time in history that the convention will be split, as some of the business parts of the event will still be held in Charlotte, the original host city.

President Trump and the GOP pulled the convention from North Carolina because the Governor would not guarantee that a full crowd would be allowed inside the city's 19,000-seat Spectrum Center for events due to the COVID-19 pandemic, including nomination acceptance speeches by President Trump and Vice President Mike Pence. Instead those events, along with many of the publicly viewed parts of the convention, will be held in Jacksonville's 15,000-seat Vystar Veterans Memorial Arena.

Jacksonville beat out other cities under consideration including Nashville, Las Vegas, Phoenix, and Orlando.  Republican Mayor Lenny Curry lobbied publicly for the event to be held on the First Coast and Governor Ron Desantis said the state would welcome the event with open arms.

The Florida Democratic Party issued a statement from its chair Terrie Rizzo, saying in part:

“First, let me be clear that I sincerely hope that the Republican Party is successful in keeping everyone safe at their events. However, I am deeply concerned that the impetus for moving their highest profile event to Florida was because Donald Trump wanted to give a speech to a crowd of people not social distancing -- and, given his previous public events, likely not wearing masks. Those are safety protocols set forth by his own administration’s public health experts to prevent the spread of COVID-19.

Donald Trump abandoned North Carolina because he wants it to look like the threat of the coronavirus is over when he gives his big televised speech. Unfortunately, optics are not a public health strategy, nor are they a good re-election strategy. No speech this president makes can successfully gloss over his failed coronavirus response to Americans who have watched this president dither for months as more than 44 million have filed for unemployment benefits and 113,000 have lost their lives. Trump is coming to Florida to throw himself a big party -- but it’s looking more and more like a goodbye party to his chance at a second term in the White House.”

The city is no stranger to hosting large events that bring thousands of people to town, including the annual Florida-Georgia football game and The Players Championship PGA tour event. However this year's Republican convention will bring unique challenges to the city, including hosting an event in the midst of a worldwide pandemic and during a period of racial tension after the police killing of George Floyd in Minnesota. Cities normally have two years to make security arrangements for political conventions but Florida Republican Party chairman and State Senator Joe Gruters believes the state can handle it. "Florida is open for business and ready to roll out the red carpet. If selected, our goal would be to host a safe, secure & successful event," the state party tweeted.

The idea of bringing the convention to Jacksonville has not been met with universal approval. Social media has been buzzing with posts opposing the idea of bringing the event to the First Coast, citing both the COVID-19 pandemic and concerns over potential protests aimed at President Trump.  An online petition has gathered over 10,000 signatures opposed to bringing the convention to Jacksonville.  The petition, started by local musician Richard Borders, says "A convention would attract protesters peaceful and violent from around the world with two opposite intense political views. It is a perfect storm for violence and destruction that has no benefit for the residents of Jacksonville."

Those concerns were echoed by former Tampa Mayor Bob Buckhorn. Buckhorn was Tampa's mayor when the city hosted the 2012 Republican convention, which nominated Mitt Romney for the party's ticket. Buckhorn cites concerns around COVID-19, security, and hurricane season as negatives against a convention in Florida this year, calling it a "bad idea". He also told First Coast News that downtown businesses did not benefit as hoped during the 2012 convention.

The convention will put the spotlight on Jacksonville's Vystar Veterans Memorial Arena. While this may be the biggest spotlight the arena's ever seen, its not the first time a major event has been held there. The arena has hosted the first two rounds of the NCAA basketball tournament, nationally televised World Wrestling Entertainment events including "Tribute to the Troops" in 2015, and big name concerts ranging from Paul McCartney to Elton John, Garth Brooks and Cher.

The arena's normal schedule of events has been disrupted by COVID-19 cancellations of sporting events and concerts. The arena did host one of the first nationally televised sporting events since the pandemic, a series of UFC fight cards in May that were carried on ESPN networks and pay-per-view.  Those events were held without fans.

Thousands of hotel rooms around the city of Jacksonville have already been blocked off by the RNC ahead of the event and others that can be normally reserved for around $100 a night are going for north of $300 during the RNC dates.

The historic "split" nature of the convention was confirmed on June 10 when the Executive Committee of the RNC announced that the business portion of the convention would still be held in Charlotte.  The party also announced that the their 2016 platform would carry over to 2020. Only 336 of the expected 2,000+ delegates will convene in Charlotte while many others are expected to come to Jacksonville instead. The convention is expected to bring 20,000 to 50,000 visitors to Jacksonville. 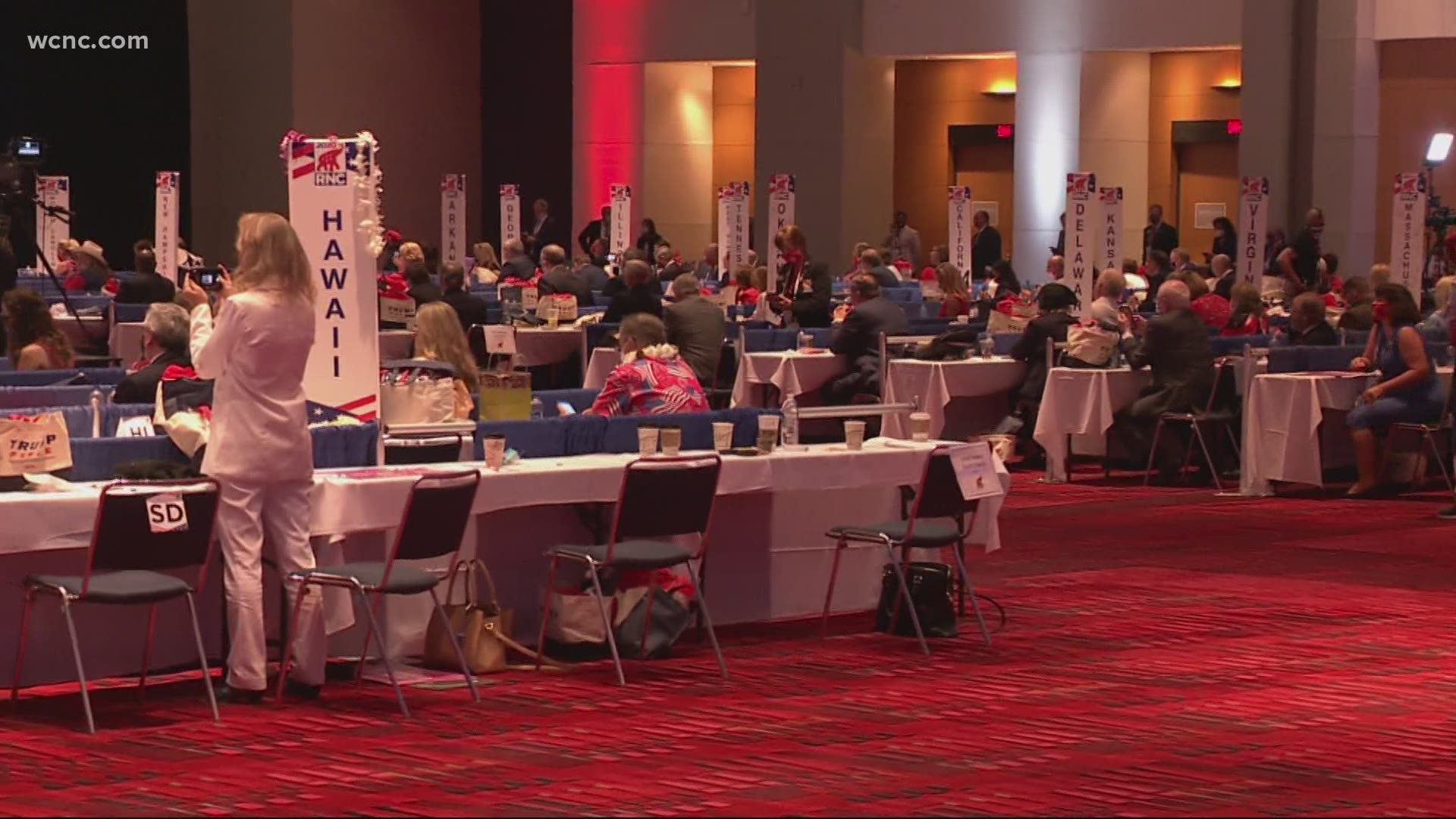