It is still uncertain whether President Trump will give his nomination acceptance speech in Charlotte or virtually from Washington or elsewhere. 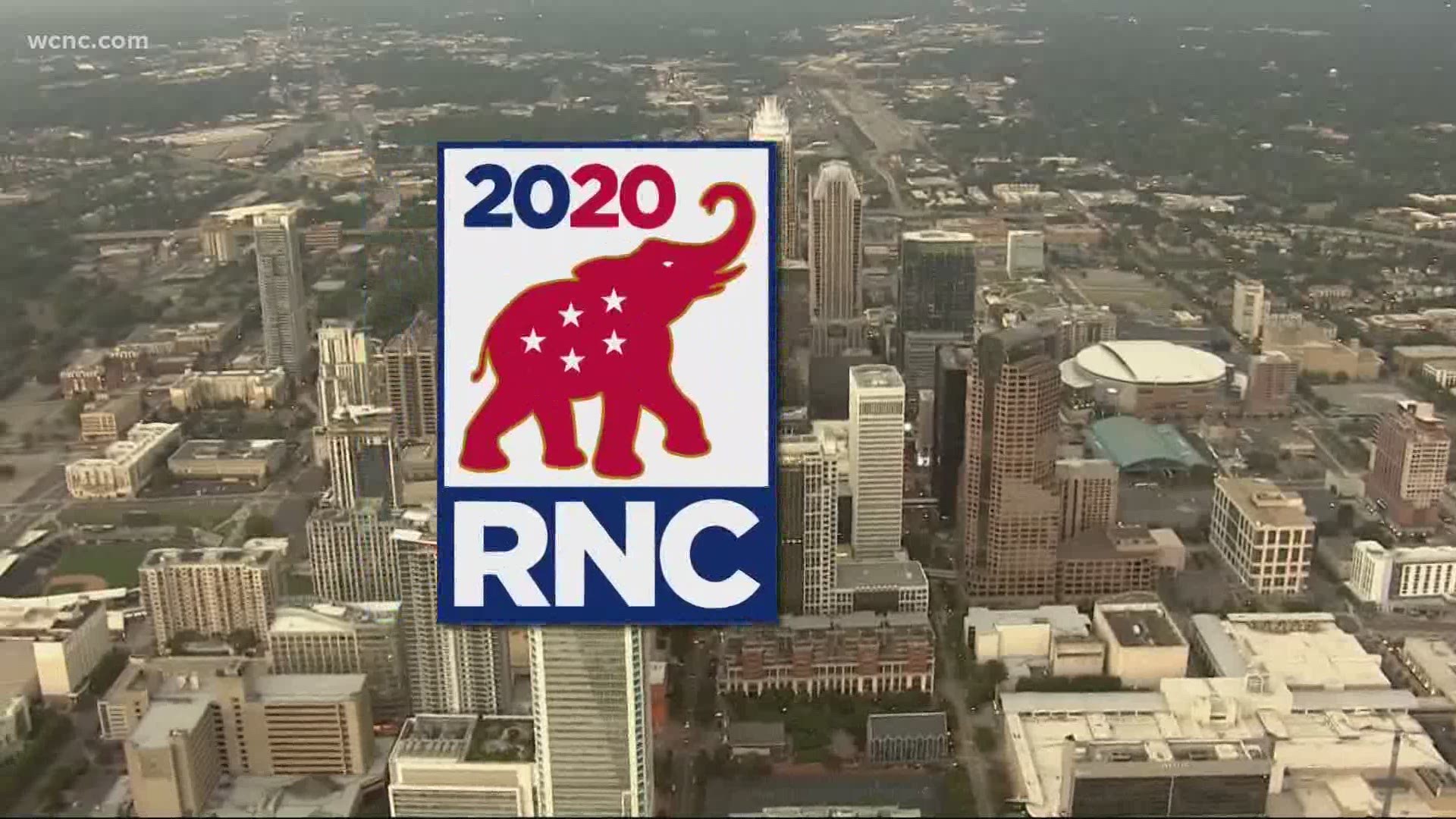 CHARLOTTE, N.C. — Just weeks after pulling the celebratory portion of the Republican National Convention from Charlotte and moving it to Jacksonville, after North Carolina lawmakers requested the event be scaled-down due to COVID-19, President Trump announced Thursday, he’s now canceling that event too.

“To have a big convention, it’s not the right time,” said President Trump, citing the growing number of positive COVID-19 cases in Florida.

After the announcement, all eyes turned back to Charlotte, where plans to host the business side of the RNC continue. In a newly obtained email from Charlotte’s city attorney, WCNC Charlotte has learned roughly 336 delegates will still head to Charlotte Thursday, Aug. 20 – Monday, August 24th.

Friday, Saturday, and Sunday, events consist of small break-out sessions during the day, with evening receptions.

Then Monday, from 9 a.m. to 1 p.m., the delegates will convene to formally select Donald Trump as the Republican presidential nominee.

“There will be six delegates from each state that will meet in Charlotte,” said Michael Whatley, Chairman of the North Carolina Republican Party.

RELATED: Charlotte city councilman hopes new RNC plan can be made for Charlotte

During a press conference Friday in Raleigh, Whatley said it’s still uncertain whether President Trump will give his nomination acceptance speech in Charlotte or virtually from Washington or elsewhere.

“This is the likes of something that we have never seen in modern American political history,” said Dr. Michael Bitzer, a political scientist at Catawba College.

“The great question now is what comes back to Charlotte and where else is the rest of the ceremonial or celebratory aspects of the RNC going to be held?” he said.

Several Charlotte city council members were quick to respond that question Friday and are split on how the city should proceed.

“I am an absolute no when it comes to expanding the convention,” said councilwoman Dimple Ajmera, “Let's be honest we are in the middle of this pandemic and there is no potential 50-thousand people convention.”

“We’ve been here, we’ve done that, it’s time to move forward,” said Charlotte councilman Malcolm Graham, saying city officials need to be decisive. “We have to protect public health and the public safety of our community and there’s no way we can plan for anything larger than what we currently have in the next 40 days, it’s just impossible.”

But council member Tariq Bokhari disagrees and believes city leaders should look at this as a blank slate.

“I think there’s an amazing opportunity here and it’s something that just never happens in this world anymore, a second chance,” said Bokhari.

Bokhari believes there’s an opportunity for the RNC to give an added economic boost to Charlotte’s hospitality industry, which he said has been struggling.

“If we could figure out how to find that middle ground and strike a new deal that is both safe and an economic infusion for those folks, Ill just tell you, one, that could be a game-changer, two, we’ve been working for two years and we’ve put a security plan to do this on a shelf that’s gathering dust, we are ready to rock and roll by taking pieces of that and making it work,” he said.

Ajmera said it’s not that simple.

“No matter where you go, you’re not going to see an economic impact,” she said, “because of the pandemic visitors are not coming and they had the same challenge in Jacksonville, a lot of folks didn’t want to sign up, even elected officials declined to come to the convention.”

The city does not intend to and will not incur any costs in support of the convention beyond the reduced budget, which was approved by the Department of Justice.

Sheriff McFadden questions whether evictions should resume; challenges sheriff's to give $1,000 to help struggling families

City forcing residents in Tent City to move ahead of RNC