Don Caskey had a handful of tattoos when he was diagnosed with stage 4 kidney cancer in 2019. Now he has over 400, and each one has a twin on a stranger. 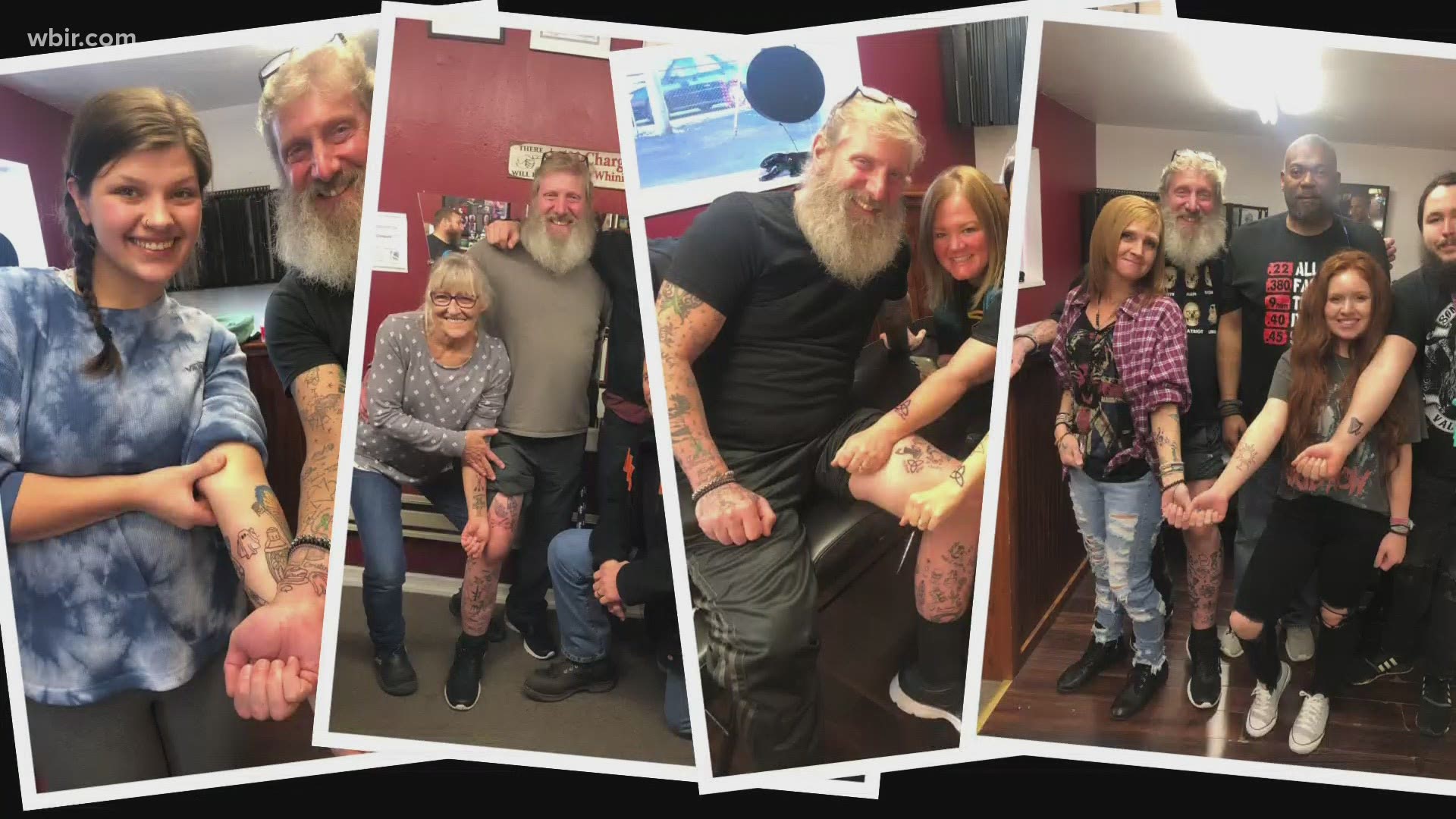 KNOXVILLE, Tenn. — If there's one thing Don Caskey isn't afraid of, it's needles.

"They all hurt some, they're not terrible," he said.

This time last year, the Ohio native had a handful of tattoos.

Now, it's well past 400, and each tattoo has a matching tattoo on a stranger's body somewhere across the world.

"I've had tattoos with people from all walks of life, all religions, all races," said Caskey. "They just want to join me and celebrate life with me."

Caskey knows his life could end at any moment as he battles stage 4 terminal kidney cancer.

"The only thing I take with me when I pass away is memories. So I started asking random strangers to get tattoos with me."

Those random strangers answered that call on social media from all across the world.

One of those calls came from Brittney Spraggins, a tattoo artist at Infinite Tattoo in Knoxville.

"It's just awesome what he's doing and how he's not letting anything get him down."

Caskey came down to Knoxville to see her in February, and she ended up doing about 50 of his tattoos, many with other people from East Tennessee.

She even got one herself.

"This lighthouse right here, and I have his name and what number I was."

Number 214. Caskey has the same lighthouse on his leg.

"Lighthouses, they're there to protect people and make sure that they're safe. But it's a bright light. Don, he has been a bright light in my life since meeting him," said Spraggins.

She and Don chatted virtually while getting matching thistle tattoos across the world at the same time.

"First international tattoo ever with a girl in Scotland," said Caskey.

She picked the design. Caskey said sometimes he'll pick, sometimes the stranger will pick, but they always get the same thing.

Caskey said sometimes the people who get inked with him have emotional reasons behind their design.

Others are just for fun.

Caskey will keep getting more tattoos. He thinks he has space on his body for a couple thousand small designs.

Each tattoo is a memory of a person and a place he can reflect on when the going gets tough.

Caskey will next head home to Ohio for another cancer treatment before hitting the road to get more tattoos.

He hopes to start a nonprofit to help pay for people's funerals after they pass away from terminal illnesses.