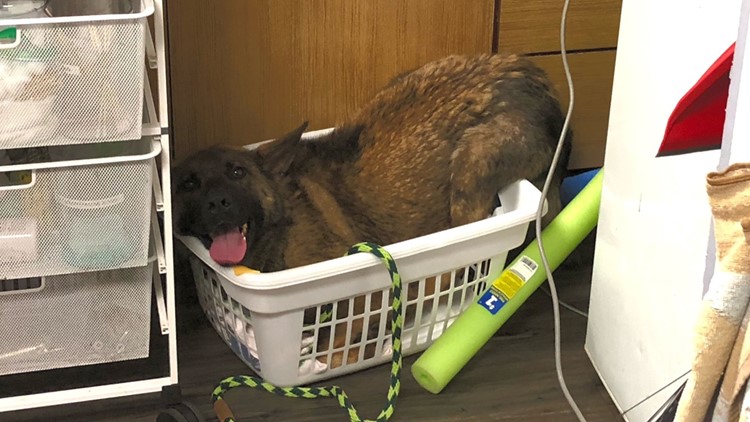 Photo by: Humane Society of Charlotte

This rescue dog spent most of his life tethered outside. Now he's slowly learning to trust people

Staff at the humane society spent a large portion of their time just sitting near him, talking to him softly, and occasionally giving him quick back scratches.
Author: Meilin Tompkins
Published: 10:15 AM EDT June 28, 2019
Updated: 10:37 AM EDT June 28, 2019

CHARLOTTE, N.C. — Shane the German Shepherd spent most of his early years tethered outside with little human interaction.

When volunteers at Humane Society of Charlotte rescued him from his awful situation he was, of course, fearful.

"He had spent much of his 2-year-old life on tethered and with little to no human interaction. Because of this, when he arrived, he was terribly afraid of us," Humane Society of Charlotte wrote on their Facebook page.

During his initial medical exam by the shelter's veterinary team, the shelter said Shane was so fearful that he spent a large portion of his time in the medical treatment room trying to squeeze himself into corners.

Staff at the humane society spent a large portion of their time just sitting near him, talking to him softly, and occasionally giving him quick back scratches.

"Their goal was just to help him understand how safe he was (isn't our veterinary team awesome,) the humane society wrote.

According to staff, Shane has been working with their Behavior Programs team and think that with the right family, the gorgeous pup will bloom and come right out of his shell.

"They say that they can tell he has a very silly and goofy side to him," the shelter wrote.

Shane the German Shepherd is available to meet by appointment only currently to make sure we keep his interaction and stimulation at a manageable level for his comfort. If you'd like to meet him or have questions about his abilities with other animals/kids, please reach out directly to our Behavior Programs Manager at training@humanecharlotte.org