No, Texas’ heartbeat bill does not allow abortions in the case of rape or incest, but makes an exception if the mother’s life is in danger

Texas Gov. Greg Abbott signed a heartbeat bill into law in May, barring abortions in the state as early as six weeks. It went into effect on Sept. 1. 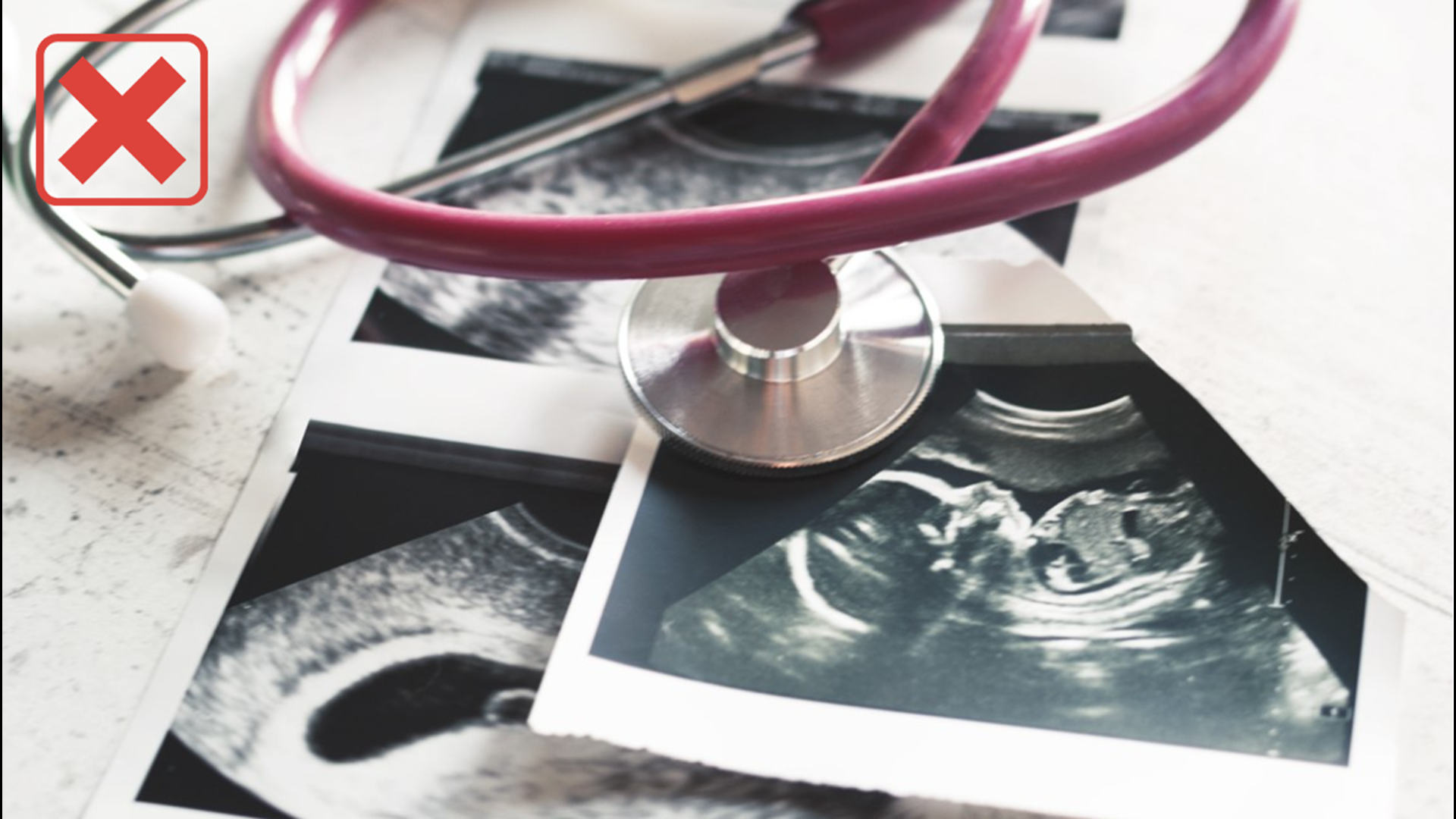 UPDATE: The Supreme Court voted 5-4 to deny an emergency appeal from abortion providers and reproductive rights groups to block the "Texas Heartbeat Act," or Senate Bill 8 (SB 8). The bill, which went into effect on Sept. 1, bars abortions in the state as early as six weeks or after a fetal heartbeat has been detected.

PREVIOUS UPDATE: On Sept. 1, the "Texas Heartbeat Act," also known as Senate Bill 8 (SB 8), went into effect. The bill bars abortions in the state as early as six weeks or after a fetal heartbeat has been detected.

SB 8 differs from previous abortion bills passed in Texas because the state's top attorney won't enforce it – the public will. The bill states this law will be "exclusively enforced" through private civil action.

Several reproductive rights groups, including the ACLU and Planned Parenthood, filed an emergency request with the U.S. Supreme Court asking it to block SB 8 on Aug. 30, KVUE reports. The filing comes after the Fifth Circuit Court of Appeals denied the plaintiffs' request on Aug. 29 to block the law.

The Supreme Court has yet to act on an emergency appeal to put the law on hold.

PREVIOUS REPORT: On May 19, Texas Governor Greg Abbott signed into law the Texas Heartbeat Act, also known as Senate Bill 8 (SB 8), which bars abortions in the state as early as six weeks or after a fetal heartbeat has been detected.

In an email, VERIFY viewer Cassie said she has recently been reading conflicting reports on whether or not the bill allows abortions in the case of rape or incest, or if the mother’s life is in danger.

Does the new Texas heartbeat bill (Senate Bill 8) allow abortions in the case of rape, incest or if the mother’s life is in danger?

No, the new Texas heartbeat bill (Senate Bill 8) does not allow abortions in the case of rape or incest, but makes an exception if the mother’s life is in danger.

“The new bill, SB 8, does not allow an exception to the law for rape or incest. And so, if you are somebody who has been sexually assaulted or have been raped, and you've gotten pregnant as a result of that, you will not be able to get an abortion after six weeks gestation in Texas under this law,” Drucilla Tigner,  policy and advocacy strategist at the ACLU of Texas told VERIFY. “There is an exception for what is called in the bill, ‘medical emergency,’ which is kind of left up to the doctor to make that determination.”

Dr. Joe Pojman, executive director of Texas Alliance for Life, told VERIFY that the pro-life organization he founded in 1988 was adamant that there must be an exception included in SB 8 to allow a physician to terminate a pregnancy if the mother’s life is in danger.

“We have to have those exceptions for the life of the mother. Fortunately, those cases are very rare with modern science, but it could happen in the case of an ectopic, in other words, tubal pregnancy, when the unborn child is developing not in the uterus of the mother, but in a fallopian tube and if left unattended that fallopian tube could rupture, the child will certainly die, and it could risk the life of the mother through hemorrhaging. So, that has to be treated and the treatment is to take action to the end of pregnancy. The intent, of course, is not to take the life of the child, but to save the mother's life, and an unintended result is that the child will die,” said Dr. Pojman.

Pojman says his organization did not recommend that the Texas Legislature include exceptions in the case of rape or incest.

“We have to recognize that the terrible, violent act of aggression of a rapist against a woman is an absolutely hideous act — it's a bodily violation of that woman. But the question is, if in rare cases that that act results in the pregnancy of the woman, what's the best thing for all parties involved? And, of course, we're talking about the mother and the unborn child. We do not think a compassionate society should advocate the death of the unborn child  because of the terrible act of the father of the child; that child is also an innocent victim, just as the woman,” said Pojman.

Kelly Hart, the senior director of Public Affairs at Planned Parenthood of Greater Texas, says SB 8 is unique in that the state of Texas has decided to give up its enforcement authority and allow anyone, including non-Texas residents, to file a private lawsuit against anyone they believe helped a woman get an abortion.

SB 8 is currently facing opposition from licensed attorneys and licensed physicians in the state of Texas. Prior to Gov. Abbott’s signage of the bill on May 19, both groups wrote open letters to the Texas House of Representatives to voice their concerns. The bill, which could be deemed unconstitutional due to The Supreme Court’s Roe v. Wade ruling in 1973 that legalized abortion in the U.S., is set to go into effect on Sept. 1, unless it is blocked by a lower court.

Although Roe v. Wade is the law of the land, according to the Guttmacher Institute, 18 states have passed laws in an attempt to ban abortion at or before 20 weeks. Those states include Alabama, Arkansas, Arizona, Georgia, Idaho, Iowa, Kentucky, Louisiana, Mississippi, Missouri, North Carolina, North Dakota, Ohio, Oklahoma, South Carolina, Tennessee, Texas and Utah. However, most of the bans are not in effect because they have either been blocked by a court or are expected to be blocked in court.

On May 17, the Supreme Court announced that it will hear a case on Mississippi’s ban on nearly all abortions starting at 15 weeks of pregnancy. Abortion rights advocates have voiced concern that the high court could soon decide to weaken abortion rights nationwide.

“The Supreme Court has changed over the past four years. The concern now is that the court is going to undermine or even overturn abortion rights, and then bans like Texas’s six-week abortion ban could go into effect,” said Elizabeth Nash, the principal policy associate, state issues at the Guttmacher Institute. “We're expecting a legal challenge to it very soon, but should the Supreme Court weaken abortion rights, then that's where people start to be concerned about whether or not this ban could go into effect.”

“We're worried that the new conservative majority on the Supreme Court might be willing to revisit Roe v. Wade, but there's almost 50 years of Supreme Court jurisprudence that backs up the constitutional right to abortion, and we hope that the court will do its duty and follow that precedent and uphold the fundamental right and the constitutional right to accessing abortion,” said Tigner.

Meanwhile, Pojman says pro-life advocates are hoping the Supreme Court will take a fresh look at the case and “possibly allow states more latitude, so they can better protect unborn children who are not yet viable.”

VERIFY
Our journalists work to separate fact from fiction so that you can understand what is true and false online. Please consider subscribing to our daily newsletter, text alerts and our YouTube channel. You can also follow us on Snapchat, Twitter, Instagram or Facebook.