No, Babe Ruth was not the last two-way baseball player to have a season like Shohei Ohtani

Several baseball players from the Negro Leagues regularly pitched and hit in the same season nearly 100 years ago. 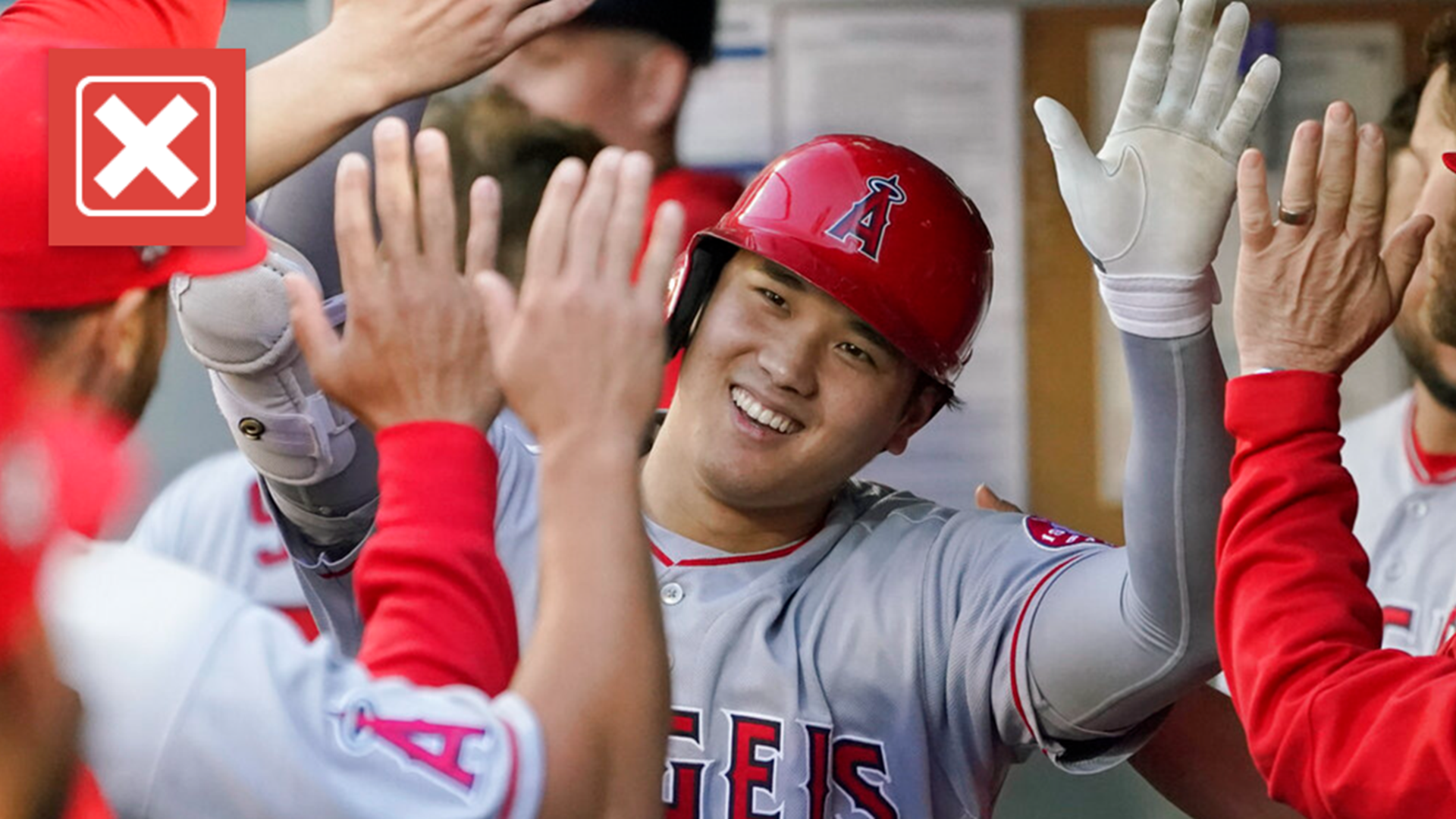 Shohei Ohtani is the center of attention in the baseball world. This year alone, he’s become the first player in 100 years to start a game as a pitcher while leading Major League Baseball in home runs, he’s struck out more batters than any other player to ever hit 25 home runs in a season and he’s hit more home runs than any other player to start more than 10 games at pitcher in a season.

He’s been compared to baseball legend Babe Ruth — who pitched for the Red Sox before becoming a legendary hitter for the Yankees — since he first entered the MLB in 2018, but those comparisons have increased exponentially this season. Red Sox manager Alex Cora boiled down the comparisons to one quote.

“This is something MLB hasn’t seen since Babe Ruth.”

Is Ohtani the best two-way player since Babe Ruth?

No. That’s in part because Ruth wasn’t the last major league player to excel with the bat and on the mound at the same time — there are a few players from the Negro Leagues, such as Bullet Rogan and Martín Dihigo, who starred as two-way players after Ruth and are now in the Hall of Fame.

It’s also partly because there’s an argument his season is even better than any single season those past players, Ruth or anyone else, ever had as two-way players.

Sports, baseball included, change over time, so any comparison between a present player and historical players will be a bit messy.

“Cross-era comparisons are always difficult and filled with some amount of speculation,” said Jay Jaffe, a senior writer at FanGraphs who specializes in research and coverage of the National Baseball Hall of Fame. “You can adhere to a model like wins above replacement (WAR) to sort of help you figure out how much better is this guy than his cohorts and measure it that way, but it’s very difficult to do a direct measurement.”

But what’s the fun in holding back for that reason? Compare away.

“I think the only examples you can point to really are in the Negro Leagues, which only recently have become recognized as of Major League caliber,” Jaffe said in reference to a December 2020 announcement from the MLB.

Phil Dixon, a baseball historian specializing in the Negro Leagues and the author of a biography on Bullet Rogan, once again picked out Rogan and Dihigo, but they were just two players in a long list of effective two-way players he named. A few of the names he mentioned as capable with the bat and on the mound were Radcliffe, Dan McClellan, John Donaldson, Hilton Smith, Ray Brown and Leon Day.

There’s a reason there were more two-way players in the Negro Leagues than there were in the National League (NL) and the American League (AL).

“The Negro League teams, because of the economic factor, didn't carry as many players as the white Major League teams,” Lindholm said. “So Leon Day and Martín Dihigo and Bullet Rogan — they played every day. So if they weren't pitching, they were in the field.”

So the experts singled out three players as the best two-way players before Ohtani: Babe Ruth, Bullet Rogan and Martín Dihigo. What do the stats say?

Shohei Ohtani has batted in 84 games in 2021 and leads the league in home runs at 33 and in slugging percentage. He’s also batted in the third most runs of any hitter. He’s pitched 67 innings in 13 games for a 3.49 earned run average (ERA) with 87 strikeouts to earn a 4-1 record. He’s also one of a few pitchers who has thrown the ball for over 100 MPH more than once this season.

Ohtani’s stats are impressive but not flawless. He gets on base far less often than any of the three other players he’s being compared to. He’s pitched in five fewer games than some of the top pitchers in the league, so his strikeouts are far below the league lead. While his ERA is among the league's best pitchers (31st), a recent poor outing at Yankee Stadium bumped him out of the top 10.

The stats for the two Negro League players come with a disclaimer: they’re incomplete. Dixon said he has been able to document more than 400 home runs and 400 games won as a pitcher over the course of Rogan’s career.

“If you go into the statistics that they're putting online, you won't get those kinds of numbers,” Dixon said. “Because those numbers don't really reflect what was really going on. They've just taken some games that they played against other Black teams, but they played many times more exhibition games than they did in games in the league.”

According to Baseball Reference, Bullet Rogan started at least 10 games as a pitcher and batted in at least 50 games in almost every season between 1920 and 1928. In 1922, Rogan was second in the National Negro League in home runs with 15, third in ERA and second in strikeouts at 118. His ERA was consistently under 3.00 and sometimes under 2.00. He kept his on-base percentage (OBP) over .400, much higher than Ohtani’s current OBP of .364.

Rogan also gets bonus points for matching up with Ohtani better than the other two in one more aspect of his game: speed. Rogan finished in the top 10 in stolen bases in 1922 when he swiped 16 bases. Ohtani is currently in the top 20 with 12 stolen bases.

While Martín Dihigo pitched more games later in his career while in the Mexican League, he was predominantly a batter during his time in the Negro Leagues. In 1929, he led the American Negro League in ERA at 2.63 and was second in home runs with 18. He consistently kept his OBP over .400, and 1929 was no exception.

The experts made their cases for why they thought any one of the three could or could not be fairly compared to Ohtani.

“[Ruth’s] two-way transition I think is maybe a little bit overstated,” Jaffe said. “During the 1918 and 1919 seasons, where Ruth was doing that, he often went a long time without pitching. I think as he realized that he was going to be the biggest star the game had ever seen when it came to batting, he would maybe complain about a sore arm and go weeks without pitching.”

Jaffe said Ruth went as many as 27 days between starts in 1918 and didn’t really begin both pitching and batting as much as he could until the end of the season. Jaffe said in 1919, Ruth pitched 15 times between May and July, but only pitched three more times after that while playing more than 100 games in the field.

The MLB All-Star Game didn’t begin until long after Ruth stopped regularly taking the mound, which means Ohtani is the first player to be an MLB All-Star as both a pitcher and a batter in the same season. One reason Lindholm believes Dihigo is Ohtani’s best comparison is because Dihigo once did the same in a different all-star game.

The all-star game for the Negro Leagues at the time was called the East-West Game, and Lindholm says in 1935 Dihigo played in center field for eight innings before taking the mound in the 11th inning after the game needed extra innings to break a tie.

“He actually was the losing pitcher,” Lindholm said with a chuckle. “He gave up a home run to Mule Suttles, who is in the Hall of Fame.”

Dixon believes Rogan had the power and the speed to match Ohtani, not to mention his great pitching and everyday play. But Dixon, who believes Rogan to be the greatest all-around player ever, doesn’t think it’s correct to call Rogan “the closest comparison we have to Ohtani.”

“I say Ohtani would be the closest comparison to Bullet Rogan,” Dixon said. “I started tracking Rogan from about 1911 to 1938. So Ohtani is not quite there yet, but, you know, he's having a good time. Part of the thing is to become a Bullet Rogan you need to be healthy. And you have to stay healthy for a long period of time.”

Regardless of longevity, the experts stressed what Ohtani is doing in a single half of a season is unprecedented. Both Jaffe and Lindholm called him a “unicorn.” Jaffe said Ohtani is currently on pace to surpass the single-season home run record from before the Steroids Era. Lindholm said even if Ohtani were to never play again, people would talk about his season for years to come.

“This is great stuff,” Lindholm said. “Even if it just ended tomorrow, it would be significant historically. Imagine the interest he's generating in the game now because of his unusual accomplishments and his great skill.”

“In terms of being at the top of the class, you could say Ruth was there,” Jaffe said. “But again, he wasn't really doing this day in and day out and back and forth the way that Ohtani is.

“So, I don't think there's anybody we can really compare him to in that regard.”

More from VERIFY: No, Japan isn’t banning Black Lives Matter apparel during anthems at the Olympics. That's an IOC decision

VERIFY
Our journalists work to separate fact from fiction so that you can understand what is true and false online. Please consider subscribing to our daily newsletter, text alerts and our YouTube channel. You can also follow us on Snapchat, Twitter, Instagram or Facebook.