On Sunday, Antonio Figueroa, his fiance and brother were fishing in kayaks when they discovered a non-responsive reptile. 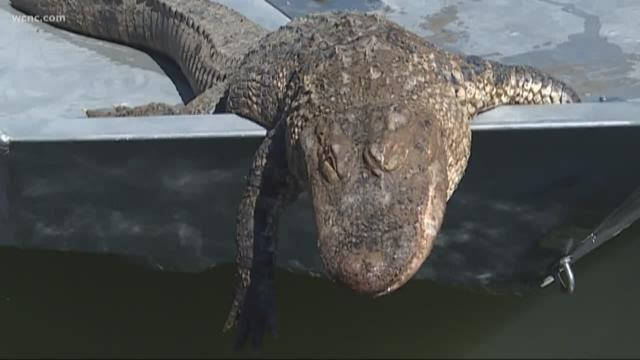 GASTON COUNTY, N.C. -- It started off as a normal Saturday on the Catawba River.

"I was out here with some friends, smoking cigarettes," said Jacob Cannon.

But before the cigarette could turn to ash, something caught Cannon's attention.

On Sunday, Antonio Figueroa, his fiance and brother were fishing in kayaks when they discovered the reptile, non-responsive.

"I didn't think it was dead when I saw it, and he pulled the tail out, and it was like 'mmm' and I was like 'yeah well it's time i'm done fishing,'" said Figueroa.

It was too late to rescue as the gator was resting on the riverbank when senior wildlife officer Cody Walker found the alligator Tuesday afternoon.

"This is the first time I've gotten an alligator call," said Walker who's spent five years in Gaston County.

1 / 5
Wildlife officials in Gaston County are investigating after a dead alligator was found in the Catawba River in Belmont.

"Obviously, they're not native to this region," said Walker, who added a thorough investigation will ensue to find out how this alligator ended up in the river.

Upon further review, the animal was a robust reptile, indicating that it was likely someone's pet before being dumped, which can carry a hefty fine. The alligator's cause of death has yet to be determined.

"This is a crime scene," said Walker. "It still is until we come to a conclusion."

Walker said although it's unlikely, there could be other alligators in the river.

"Only time will tell, it's part of the job. We investigate."