Here is a look at the top sports moments from 2018, struggles to triumphs. 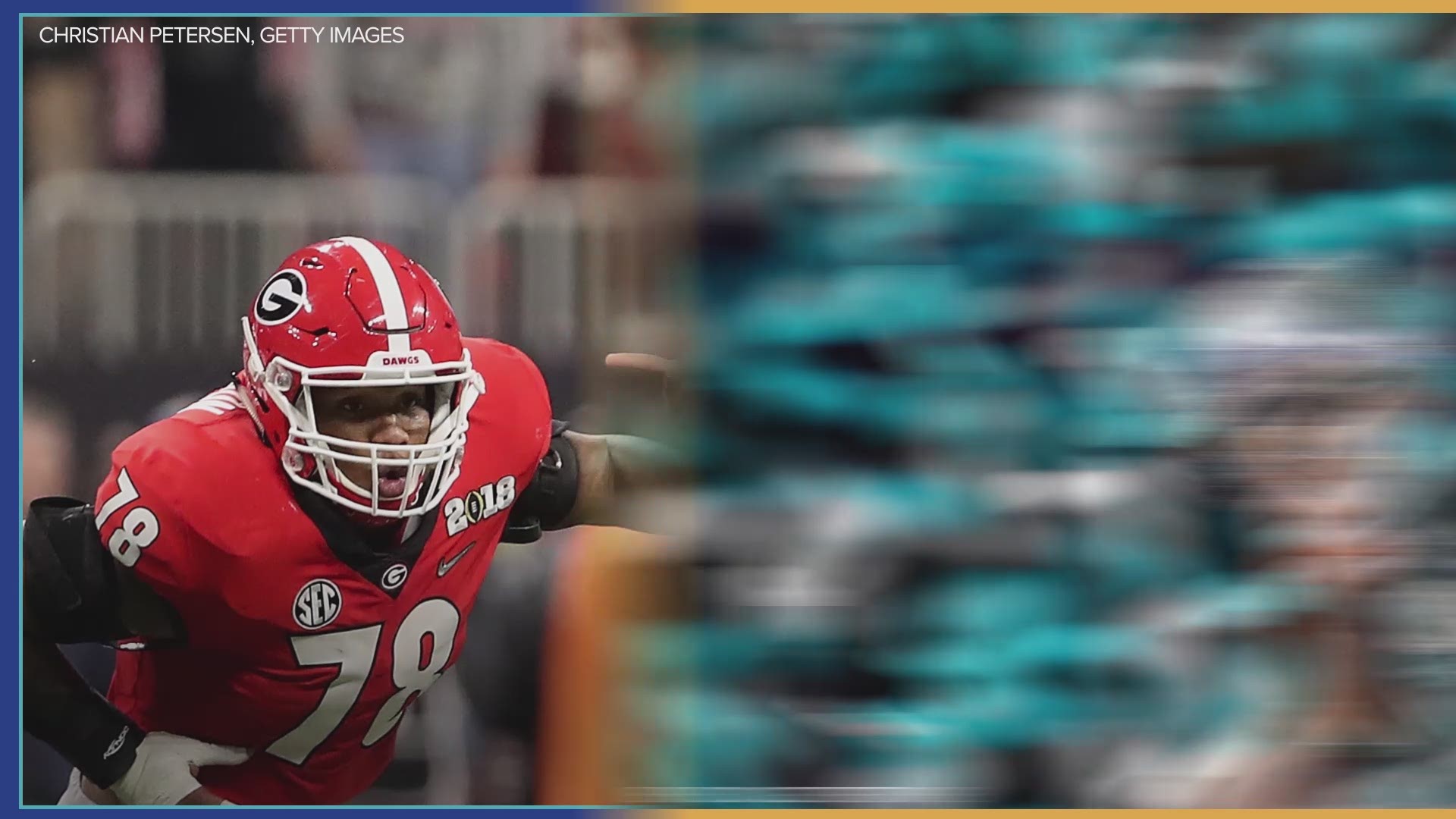 Over the course of a year, there are more stories of struggle, triumph and history in sports than most people can remember. Here is a look at the top sports moments from 2018.

The young signal caller led the Crimson Tide all the way back to force overtime, then hit fellow freshman DeVonta Smith in stride for a 41-yard, championship-winning score.

UFC Hall of Famer Ronda Rousey stunned the world on January 28 when she crossed over from sports to sports entertainment by joining the WWE. Since her debut at the Royal Rumble, Rousey has received praise for her development as a wrestler and performer. She won the Raw Women's Championship in August at SummerSlam.

Tom Brady set a Super Bowl record for passing yards, but his team was outdueled by a backup quarterback who had bounced around the league. Nick Foles and the Philadelphia Eagles defeated the New England Patriots 41-33 in Super Bowl LII on February 4. The big highlight was Foles catching a touchdown on 4th and Goal right before halftime.

Larry Nassar, a former sports doctor who admitted molesting some of the nation's top gymnasts for years under the guise of medical treatment, was sentenced to 40 to 175 years in prison on February 5.

The sentence capped a seven-day hearing in which more than 150 women and girls offered statements about being abused by Nassar. Olympic gold medalists Aly Raisman and Jordyn Wieber were among those who confronted him face-to-face in court.

Prominent current and former gymnasts were critical of USA Gymnastics in its handling of the abuse scandal. Two USA Gymnastics presidents resigned, the U.S. Olympic Committee took first steps to revoke USA Gymnastics’ status as the governing body for the sport at the Olympic level and USA Gymnastics filed for Chapter 11 bankruptcy protection as it faced dozens of sex-abuse lawsuits.

It's amazing how many memories can be made in two weeks in February during the Olympic Games.

In a sign of hope and peace, North and South Korean athletes walked together at the opening ceremony under a unified flag and competed together to form Korea’s women's hockey team.

Mirai Nagasu became the first American woman to land a triple axel at the Olympics, helping the U.S. to a bronze medal in team figure skating. But the American sparkle on the ice belonged to Adam Rippon, who took the gold in charisma even though he finished 10th in the men's competition.

A new superstar emerged on the U.S. Snowboarding team as Chloe Kim, 17, dominated the halfpipe. She already clinched the gold after her second of three runs. For the men, Shaun White won halfpipe gold again after a scintillating third and final run. America also took gold in both the men's and women's slopestyle snowboarding events.

The U.S. women's hockey team got redemption, beating its nemesis Canada in a shootout for the gold medal. Four years ago, the Americans let a 2-0 lead get away, and it cost them the gold.

Kikkan Randall and Jessica Diggins became the first Americans to win any medal in a women's Olympic cross-country event, taking gold in the team sprint free final. On the men's side, the U.S. took home its first-ever gold medal in curling.

Finally, the shirtless Tongan flag bearer from the 2016 Summer Olympics was back -- still shirtless and oiled up. Pita Taufatofua competed in Rio in Taekwondo, then qualified for Pyeongchang in cross country skiing as the island nation’s lone athlete. Even though it was below freezing during the opening ceremony, Taufatofua walked out in the same outfit and went viral all over again.

UMBC: The little school that did the improbable

The University of Maryland-Baltimore County Retrievers became the first No. 16 seed in NCAA tournament history to beat a No. 1 seed. UMBC defeated Virginia 74-54 on March 16 to end a 135-game losing streak for No. 16 seeds. It was the most points Virginia had given up all season.

He's a player that harks back to the early days of Major League Baseball -- a pitcher who would also be in the lineup on his off days. Shohei Ohtani moved from Japan to play for the Los Angeles Angels and made his debut on March 29. On days he didn't pitch, he was a designated hitter.

An injury to his pitching elbow midseason abruptly halted his pitching appearances, but he continued to bat. Ohtani won American League Rookie of the Year. He joined Babe Ruth as the only players in major league history to hit 15 home runs and pitch 50 innings in a season, according to Baseball America.

The Notre Dame Fighting Irish defeated previously undefeated Connecticut 91-89 in overtime of the NCAA Women's Final Four semifinal. Then, in the final, Notre Dame's Arike Ogunbowale hit a three-pointer with one second left to beat Mississippi State, 61-58 for the championship on April 1.

Villanova back on top

Villanova dominated the competition on the way to its second NCAA Men's Basketball national championship in three years. The Wildcats won each of its tournament games by double digits, ending with a 17-point win over Michigan in the title game on April 2.

Credit: Pool
Donte DiVincenzo #10 of the Villanova Wildcats drives to the basket against Charles Matthews #1 of the Michigan Wolverines in the second half during the 2018 NCAA Men's Final Four National Championship game. (Jamie Schwaberow/Getty Images)

You just don't see this often from a team playing in its first season. The Vegas Golden Knights surprised the world by reaching the Stanley Cup Finals, eventually falling to the Washington Capitals in five games.

It wasn't as if Vegas barely made it to the postseason – the team cruised. The Golden Knights broke the NHL record for most wins by an expansion team and did it more than three months before the season was over.

Despite not winning home court advantage in the Western Conference, the talent-loaded Golden State Warriors survived injury-depleted Houston in the conference finals. Then Golden State made quick work of LeBron James and the Cleveland Cavaliers, sweeping the NBA Finals in four games. It was their third championship in four years.

Credit: Gregory Shamus
Kevin Durant and Stephen Curry of the Golden State Warriors react as Tyronn Lue of the Cleveland Cavaliers looks on in the first half during Game Four of the 2018 NBA Finals. (Gregory Shamus/Getty Images)

Justify became the second horse in three years to win the Triple Crown. He easily won the Kentucky Derby, then won The Preakness on a soggy track. At the Belmont Stakes, Justify took the lead in the first turn and never relinquished it on the way to immortality as the 13th Triple Crown winner.

LeBron to the Lakers

With less suspense than eight years ago when he first left Cleveland for Miami, LeBron James announced on July 1 he was leaving the Cavaliers for a second time to join the Los Angeles Lakers. Cavaliers fans were more forgiving about this second departure thanks to James bringing them a championship in 2016.

Thanks to three goals by its own players, and one by the opposing team, France powered past Croatia 4-2 to win the World Cup on July 15. Croatia’s Mario Mandzukic notched the first goal of the game for France when he deflected a free kick into his own goal. It was France's first World Cup victory since 1998.

Three men won golf's four major titles in 2018, and each could brag that they were the first at something. Patrick Reed picked up his first major victory by taking the green jacket at The Masters. Francesco Molinari became the first Italian to win a major by winning the British Open, and Brooks Koepka was the first man since Tiger Woods in 2000 to win both the U.S. Open and the PGA Championship in the same year.

During the championship match at the U.S. Open on Sept. 8, Serena Williams was in tears during an argument with chair umpire Carlos Ramos. Williams had been given two warnings, one for coaching and one for smashing her racket, after Naomi Osaka broke her serve. Williams went on to call Ramos a thief and demanded an apology. Osaka won the match, denying Williams a record-tying 24th grand slam victory.

After 10 years in the broadcast booth, Super Bowl champion coach Jon Gruden returned to the sidelines coaching the Oakland Raiders. Gruden was given a stunning 10-year deal worth a reported $100 million. The Raiders had a rough first season under Gruden, highlighted by the decision to trade away holdout and defensive MVP-candidate Khalil Mack.

Credit: Jennifer Stewart
Head coach Jon Gruden of the Oakland Raiders looks on prior to the NFL game against the Arizona Cardinals at State Farm Stadium on November 18, 2018 in Glendale, Arizona. (Photo by Jennifer Stewart/Getty Images)

Tiger Woods is finally back

Tiger Woods got his first tour win in five years when he won the Tour Championship on September 23. It was a day some wondered would ever come after Woods has fought through multiple surgeries to get back to his winning form.

The Boston Red Sox dominated the regular season with 108 wins, dominated October’s postseason, and dominated the World Series -- except for one game -- to win its fourth championship in the last 13 years.

The only real hiccup along the way was historic. The Los Angeles Dodgers defeated the BoSox 3-2 in Game 3 of the World Series. It was the longest game in World Series history both in terms of innings (18) and time (7 hours, 20 minutes).

It was a regular season game with a Super Bowl atmosphere. The 9-1 Kansas City Chiefs and 9-1 Los Angeles Rams combined for 14 touchdowns, including three on defense, in the highest-scoring game in Monday Night Football history on Nov. 19. The Rams won 54-51 in game that saw seven lead changes.