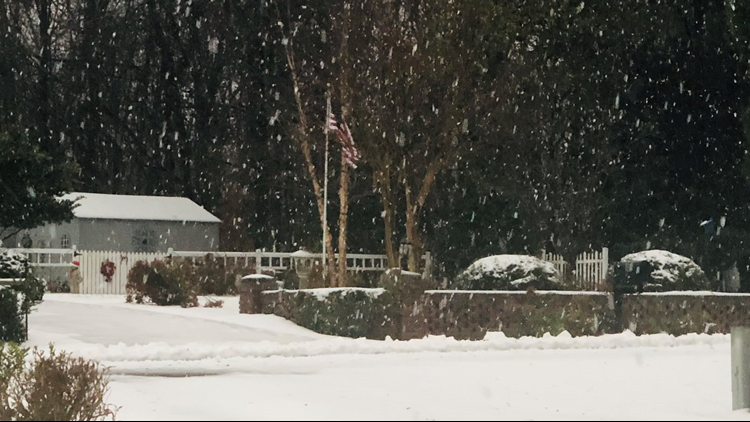 5. Snow starts off the year in Charlotte

Charlotte started 2018 as a winter wonderland. Temperatures didn't climb above 35 for the first four days of the year and less than four weeks into 2018 snow hit the Carolina's.

CMPD responded to over 250 accidents as a result of the storm which dumped two to five inches of snow in Charlotte.

The snow also showcased the 'Snow Angel Competition' on social media with a CMPD officer outdoing everyone.

4. Rain, rain and more rain. Charlotte has one of the wettest years on record

2018 has been the year of rain in Charlotte. As of late December the Queen City has experienced the tenth wettest year on record with more rain possible to add to that total.

The totals were helped by Hurricanes Florence and Michael which dumped massive amounts of rain across both North and South Carolina.

Charlotte could move into the ninth slot on the list with more rain slated for late in the week just before the New Year starts.

3. Snow and ice hit Charlotte to end the year

As 2018 drew to a close snow came back to the Queen City to close the year, much like it started.

Snow and ice knocked out power to thousands across the Charlotte area and resulted in hundreds of traffic accidents.

The winter storm which dumped nearly three inches of snow in Charlotte which was the most snow the city had seen in December since 1997.

The storm also set records in the foothills and mountains with some areas getting two feet of snow. Mount Mitchell came in on top with an incredible 34 inches of snow.

2. Hurricane Michael brings heavy winds and rain to the Carolina's

Hurricane Michael struck less than two months after Hurricane Florence ripped through the Carolina's. Michael came from the Florida panhandle making landfall as a powerful Category 4 hurricane with winds of 150 miles per hour.

Michael came through the Carolina's just southeast of Mecklenburg County bringing with it heavy winds gusting well above tropical storm force and knocking out power to millions across North and South Carolina.

Hurricane Michael also brought flooding rains to many areas hit hard by Hurricane Florence including the mountains and sandhills.

Hurricane Florence dumped record amounts of rain across the Carolina's as it made landfall near Wilmington and slowly made its way inland.

Some areas in eastern North Carolina saw more than 30 inches of rain courtesy of the slow moving tropical storm.

The storm brought record amounts of rain to Charlotte setting the single day record for rainfall in Charlotte and caused major river flooding across the state.

The flooding from Florence didn't let up in some areas for over a week as rivers and streams crested long after the storm had moved on and the sun had come out.

Many across North and South Carolina talk of Hurricane Hugo in 1989 and the biggest storm to hit the area in recent memory. Hurricane Florence may have supplanted Hugo with the damage she laid on the Carolina's in 2018 that won't be repaired until years down the road.