The one-million-dollar bronze sculpture will be unveiled prior to kickoff of the 2020 season. 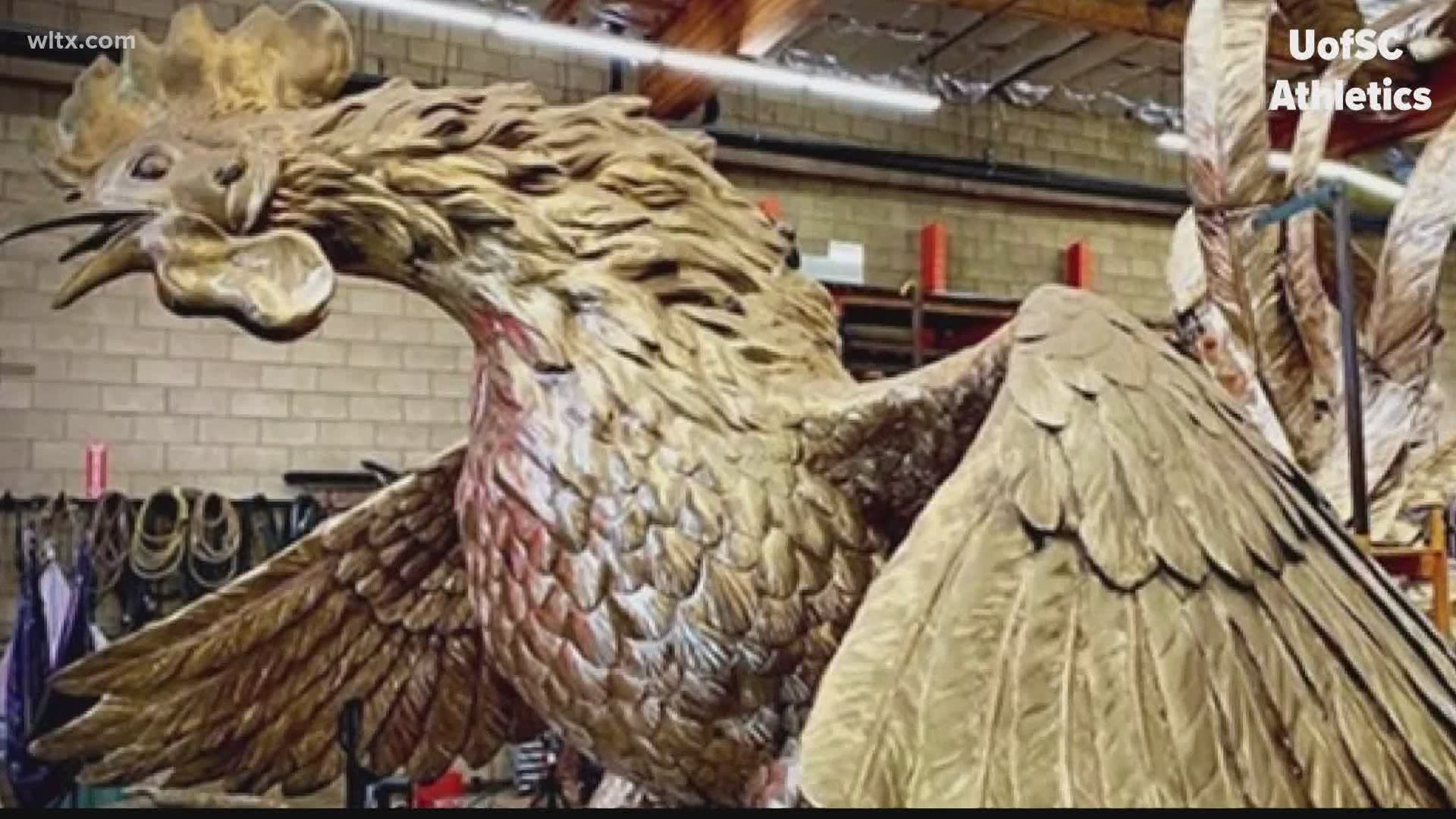 COLUMBIA, S.C. — A bronze sculpture of a Gamecock is being assembled outside Williams-Brice Stadium.

According to the University of South Carolina,  was funded through alumni donors, David ('84) and Lynette Seaton, and Bill Horton ('73) and his wife, Mary Major ('75).

The 20-feet tall and 20-feet wide sculpture will sit near the corner of Bluff Road and George Rogers Boulevard.

Work began on Thursday and will take nearly two weeks to complete assembly and final surface finishing. It is expected to be unveiled prior to kickoff of the 2020 season on September 26, when South Carolina hosts Tennessee.

Derek Gruner, Architect for The University of South Carolina, said a lot has gone into creating this massive statue.

“Today is the final step in a project that’s been going on for a few years to create an iconic and monumental gamecock sculpture for Williams Brice Stadium," Gruner said. "The sculpture was cast and fabricated in San Diego and it was trucked here over the past few days and is now being erected on the side of Williams Brice.”

The multi-year project started as a clay model, and will soon tower 20 feet over football fans as they walk into the stadium. According to Gruner, thousands of hours of work has been put into the its creation.

Thankful to the generous donors who made this possible.

The sculpture weighs nearly 10 tons. The steel frame is bolted into place and then the torso, tail, and head pieces of the sculpture get lifted, attached to the frame, welded together with joints ground smooth, and finished with a patina coating.

Though the statue arrived Thursday, welding and grinding will happen over the next week. Sandblasting of the sculpture is scheduled for Friday, September 18, and four days of patination will follow. Some work will be done inside a large tent so that the work environment can be controlled.

This thing is going to be a real beauty once it’s completed. Look how good it looks already!! @WLTX @UofSC pic.twitter.com/p0YGKvyjYV

“The sculpture is monumental because of William’s Brice being so enormous. We wanted to have the sculpture of the gamecock as something that was not going to seem dwarfed by the stadium," Gruner says.

The university had to install structural components approximately 25 feet into the ground to make sure the statue can resist wind.

The North Carolina sculptor, Jon Hair, was chosen because of his prior work with large mascots at colleges throughout the country.

Gruner adds, “I just hope the fans enjoy it and know an enormous amount of work went into getting this done."

The gigantic gamecock statue that has been in the works for a while now is currently being assembled at Williams Brice! @WLTX @UofSC pic.twitter.com/qXraqyIg8d

If you have any story ideas or information on things happening around town, contact us at StreetSquad@wltx.com or tweet us using the hashtag #StreetSquad19.