The 34-year-old made his first trip to the Olympics after a major back injury almost ended his career. 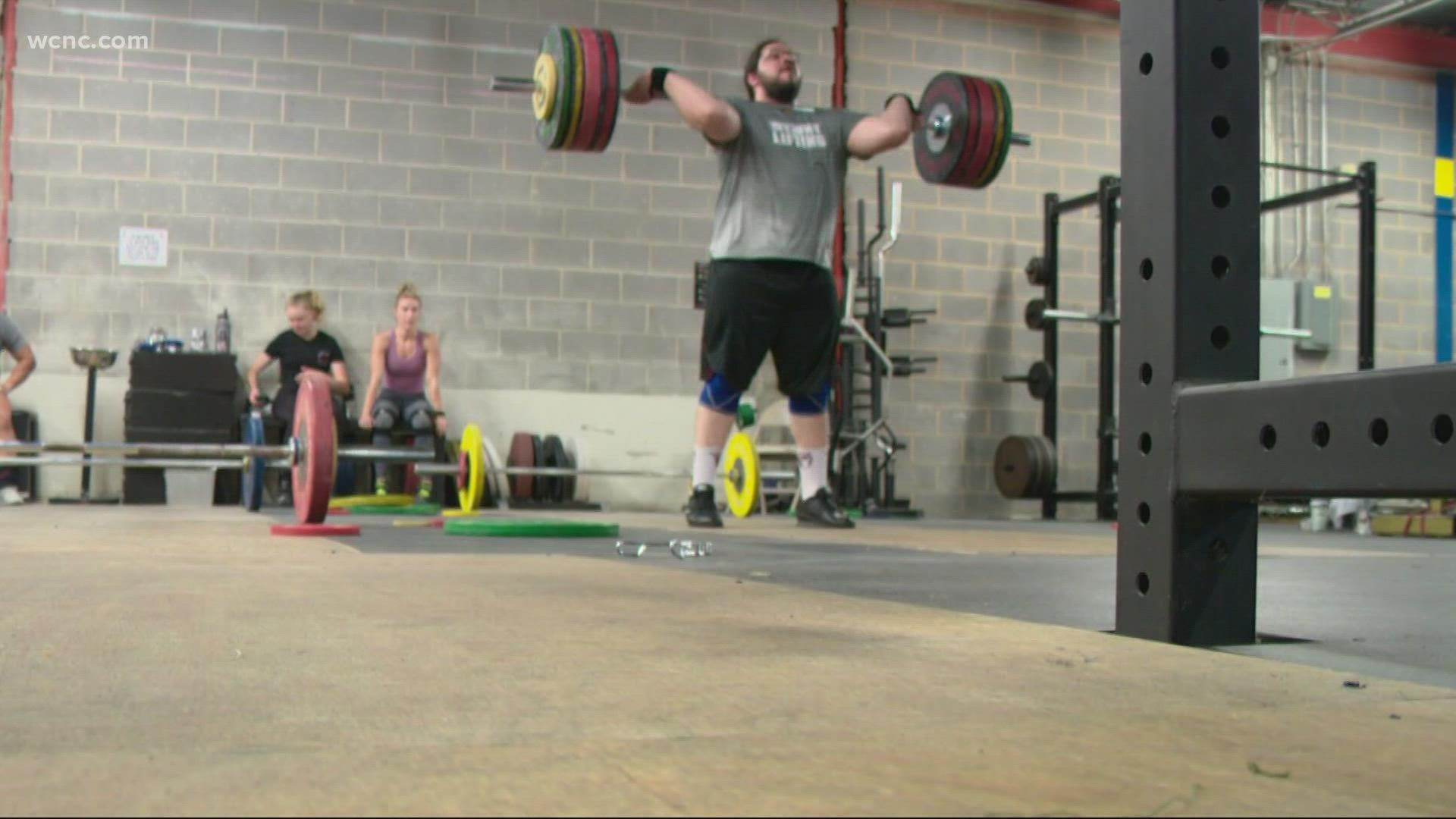 CHARLOTTE, N.C. — Caine Wilkes was the last athlete to represent Team USA on the weightlifting platform at the 2020 Tokyo Olympic games early Wednesday.

Caine made his opening Snatch attempt of 173kg, prior to missing his second and third attempts.

“I’m feeling a lot of emotions right now. It means a lot to be here. It wasn’t quite the day I wanted but it’s a day I won’t forget," Wilkes said in a statement released by USA Weightlifting after the competition.

In the Clean and Jerk portion of the competition, Caine made his first attempt at 213kg and moved up to 217kg, a weight he missed on his 2nd attempt, but made on his third.

His 390kg total earned him 9th overall in the +109kg competition. The gold medalist in the competition, Georgian Lasha Talakhadze, set a new world record in the category with a 488kg total.

To understand Wilkes' journey to Tokyo, you've got to take a longer view.

"I've been in the sport for a little over 20 years now," Wilkes told WCNC Charlotte's Nick Carboni prior to the Olympics. "At least for half of that it's been in my head that (going to the Olympics) was a possibility."

Wilkes' hometown is Matthews, trains at Charlotte Strength in NoDa, and made his Olympic debut early Wednesday morning at about 1 a.m. et; five years after experiencing the heartbreak of being left off the team.

A decade ago, he suffered a devastating back injury that should have ended a dream that had just begun.

"At that point we thought we were done," he recalled.

In the beginning, Caine began lifting to achieve glory under the Friday night lights growing up in Virginia.

"Initially it was just kind of to supplement football," he said. "When we started I was not the strongest kid in the room or anything."

He wasn't even the strongest kid in his family which consisted of four boys.

"Whenever people hear that they say God bless your mother," he said.

But it was Caine who outlifted and outlasted.

"Once he stands up with the weight," his coach and father, Chris Wilkes said, "They know he's got it."

RELATED: Here's why Charlotte's Anna Cockrell was disqualified from the women's 400m hurdles finals at Olympics

"Felt like a throb in my lower back," Caine said. "Dumped the weight, stood up and immediately doubled back over because of all that pain."

"People were asking about him and I said he's done," Chris said. "His back's messed up."

But nearly a year later, Chris found his son's eye wandering across the gym. He saw Caine demonstrating to another lifter.

After some discussion and time, Caine was back in the sport.

"Let's give this weightlifting thing a try again," Caine said.

"A lot of people don't come back from things like what happened to him," his father recalled.

Caine built his body and his lifts back up to become a national and Pan-American champion.

In 2016, he came painstakingly close to making the Rio games, but Team USA changed the number of lifters it would take at the last minute.

"It was a good experience," Caine said, "because I think it helped my mentality."

And Caine's mentality while lifting? Free and fun.

"I like to keep things light at weight-lifting meets," he said. "No matter the gravity of it or the seriousness of the competition."

Before most lifts he'll crack a joke and always give his dad's face a little smack or his beard a playful tug.

Credit: Caine Wilkes
Caine Wilkes pulls on the beard of his father and coach, Chris. It is a tradition he does before most weightlifting competitions.

"It's fun and we keep it that way," Chris said. "There's only one serious moment when we go out and lift, we stop and pray. After that, it's fun and games."

“To be without him this entire journey is completely unmatched. He’s always been there as a role model," Caine said. "To have that support in one of the biggest facets of my life for the last decades, and to hit the pinnacle by making the Olympic team and having him here to coach me just means a whole lot.”

And now Caine has represented his country on the Olympic stage.

"Really just being able to represent my country and being able to do it with my dad in my corner," Caine said prior to the games. "He's been there with me the whole way. I feel really lucky to be able to share this moment with him."

Caine now expects to take some time off.

“There’s going to be setbacks and hard times. If you just stick with something long enough, you never know where it will take you," Wilkes told USA Weightlifting after his Tokyo appearance. “I’m going to take a little bit of time off. I’ve been joking around with friends, talking about debating between a hard retirement and a soft retirement. I’ll probably take some time to figure out what exactly I want to do.”

Caine and his father are on their way to Hawaii to meet his wife and mother.