This is where McIlroy won his first PGA Tour title in 2010, closing with a 62. He lost in a playoff to Rickie Fowler and D.A. Points two years later, and won in 2015. 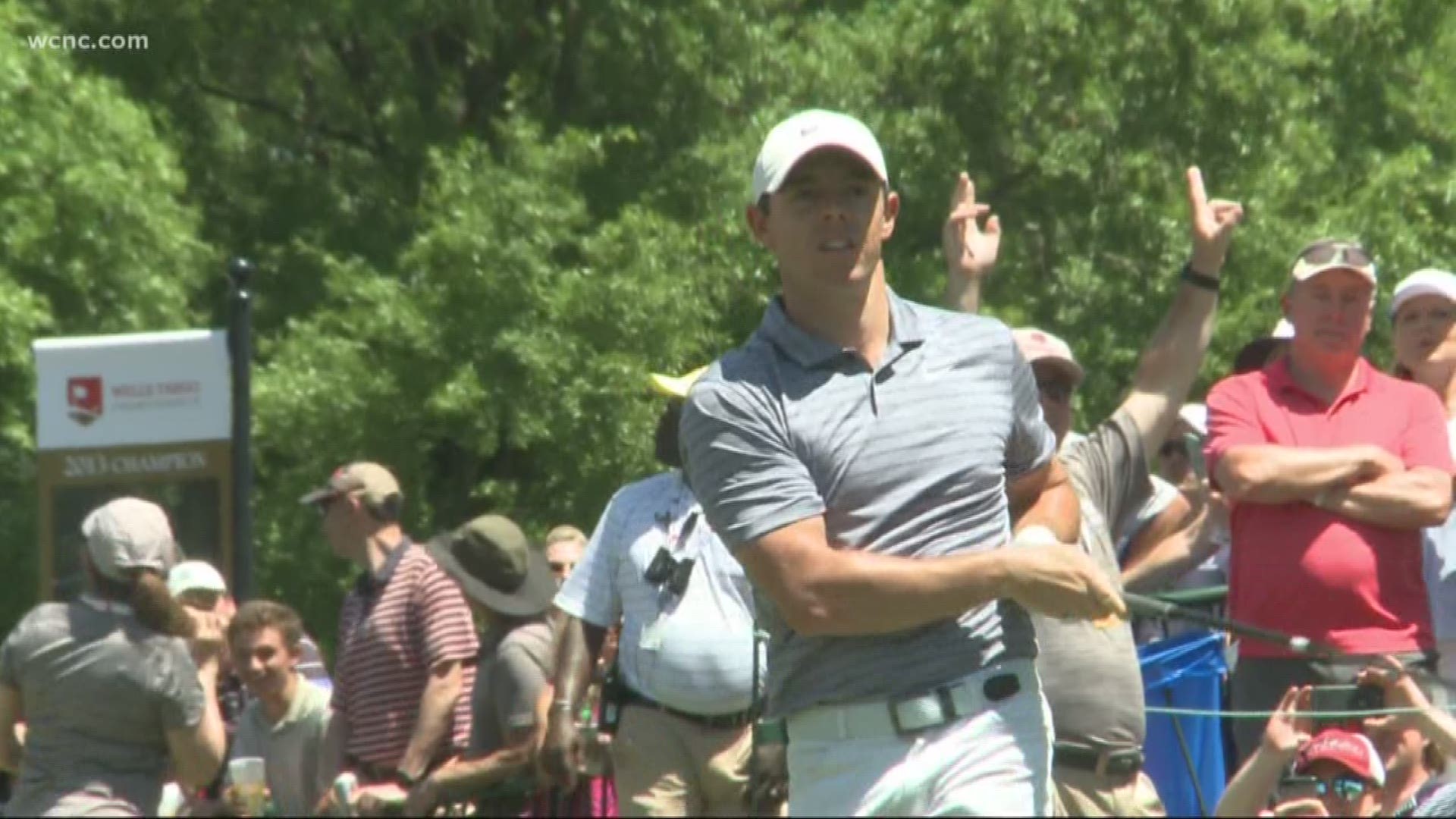 CHARLOTTE, N.C. — Rory McIlroy looked every bit like a player who has won twice at the Wells Fargo Championship.

Twice when he was out of position off the tee, he managed to make birdies. He missed a 4-foot birdie putt after his most amazing recovery of all. And late in his round Thursday, he ran off three straight birdies for a share of the lead with Joel Dahmen at 5-under 66, his lowest start in 10 appearances at Quail Hollow.

Walking to the scoring area, he smiled and said, "Managed my game."

His translation of that?

"Get the most out of your round, turn 70s in 66, like I did today," he said. "I felt like I hit it like I should have shot 1- or 2-under par. I didn't feel like it was a round that I deserved to shoot 5 under, but I got the most out of it, which is nice if I'm able to continue to do that sort of stuff."

He wasn't complaining. In his first start since tying for 21st at the Masters — his only finish out of the top 10 this year — McIlroy got out of trouble and made enough key putts to keep moving in the right direction. His only bogey came after a drive that bounced into a creek, and there's no recovering when a ball is in 4 feet of water.

Dahmen, a cancer survivor who tries not to take himself too seriously, played a more steady game. Playing three groups behind the large crowd following McIlroy, he kept bogeys off his card and holed a 15-foot birdie putt on the 18th for his 66.

They were a shot ahead of a group that included Patrick Reed, who is having the opposite year of McIlroy. The former Masters champion has yet to finish in the top 10, and he hopes a bogey-free round like Thursday morning will be a signal that his work on his swing is done and it's time to start hitting shots.

Dahmen tied for 12th at The Players Championship and earned just over $250,000, which made him feel like "the richest man alive." He decided to grow in a mustache, which he kept for good luck until hitting a ball in the water last week at the team event in New Orleans. So he shaved.

But he's still playing well enough to think this might be the week he at least gives himself a chance.

"I want to be in the hunt with nine to play. That's the goal," he said. "I haven't really been there yet. I'm good enough to. I should be there. I should have chances by now. I just kind of need to get out of my own way and let it go."

McIlroy was in the trees on the second hole when he punched out low and let the ball run across the sun-baked, fast fairway and onto the green about 20 feet, setting up a long birdie putt. He got out of minor tree trouble on the par-5 10th to set up a birdie. He was out of position left of the 11th fairway and hit that to 2 feet.

His best shot was from a suspect lie in the right rough, blocked by a tree, facing an elevated green with a back pin. The idea was to dump it in a front bunker and try to get up-and-down for par.

"That's where I assumed it was going to go, but it came out perfectly, had a little more cut on it than I thought it was going to out of the rough, took a nice couple of hopes and got up there very close," he said.

Not close enough, for he badly pushed the birdie putt.

"Probably didn't deserve to make the putt after the tee shot," he said.

And then in a three-hole stretch, he moved to the top of the leaderboard. It started with a long bunker shot to 6 feet for birdie on the short par-4 14th. His 3-wood on the par-5 15th went over the green and he chipped weakly to 12 feet and made the putt. And then he smashed a driver that bounced off the ridge next to a bunker and down the fairway, leaving a chip 9-iron to 8 feet for a third straight birdie.

This is where McIlroy won his first PGA Tour title in 2010, closing with a 62. He lost in a playoff to Rickie Fowler and D.A. Points two years later, and won in 2015.

"I've got some great memories here," he said. "Every time I step onto this golf course, I feel like I have a chance to shoot a good score. I didn't play my best today. I managed my game well, scrambled well. But it added up to a good number at the end of the day."