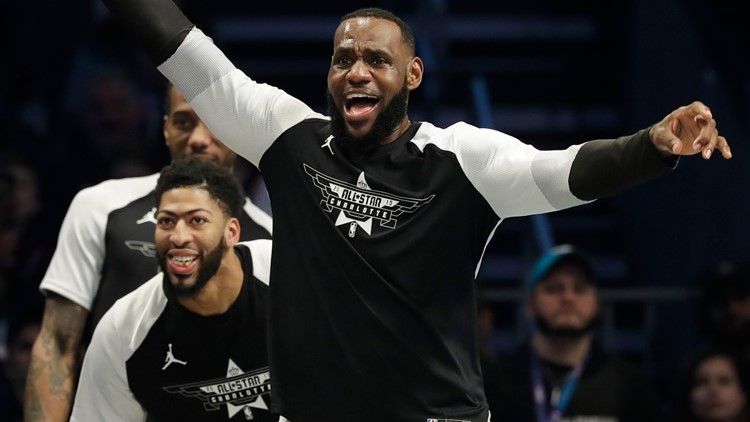 Photo by: AP
Team LeBron's LeBron James, of the Cleveland Cavaliers celebrates a basket against Team Giannis during the second half of an NBA All-Star basketball game, Sunday, Feb. 17, 2019, in Charlotte, N.C. (AP Photo/Chuck Burton)

Team LeBron trailed by 18 points in the first half but battled back in the third quarter to take the lead behind the sharpshooting of Klay Thompson and Damian Lillard. Thompson had 20 points, and Lillard had 18.

James Harden sealed the win with a 3-pointer with 46 seconds left putting Team LeBron up by 16.

Antetokounmpo finished with 38 points and 11 rebounds to lead his team, while Bucks teammate Khris Middleton added 20 on six 3-pointers. Stephen Curry had 17 points, nine rebounds, and seven assists in his return to Charlotte but was 4 of 17 from the 3-point range.

Because of Team LeBron's win, Right Moves for Youth will get $350,000 from the NBA and National Basketball Players Association. The organization's mission is to help Charlotte students graduate high school and prepare for the real world.

Team Giannis played for Second Harvest Food Bank of Metrolina. That charity will get $150,000 to help eliminate hunger by soliciting and distributing food and household items to people in need.