MAC postpones most fall sports until spring due to COVID-19 pandemic, including football

MAC is the first FBS conference to either postpone or cancel its football season due to coronavirus. 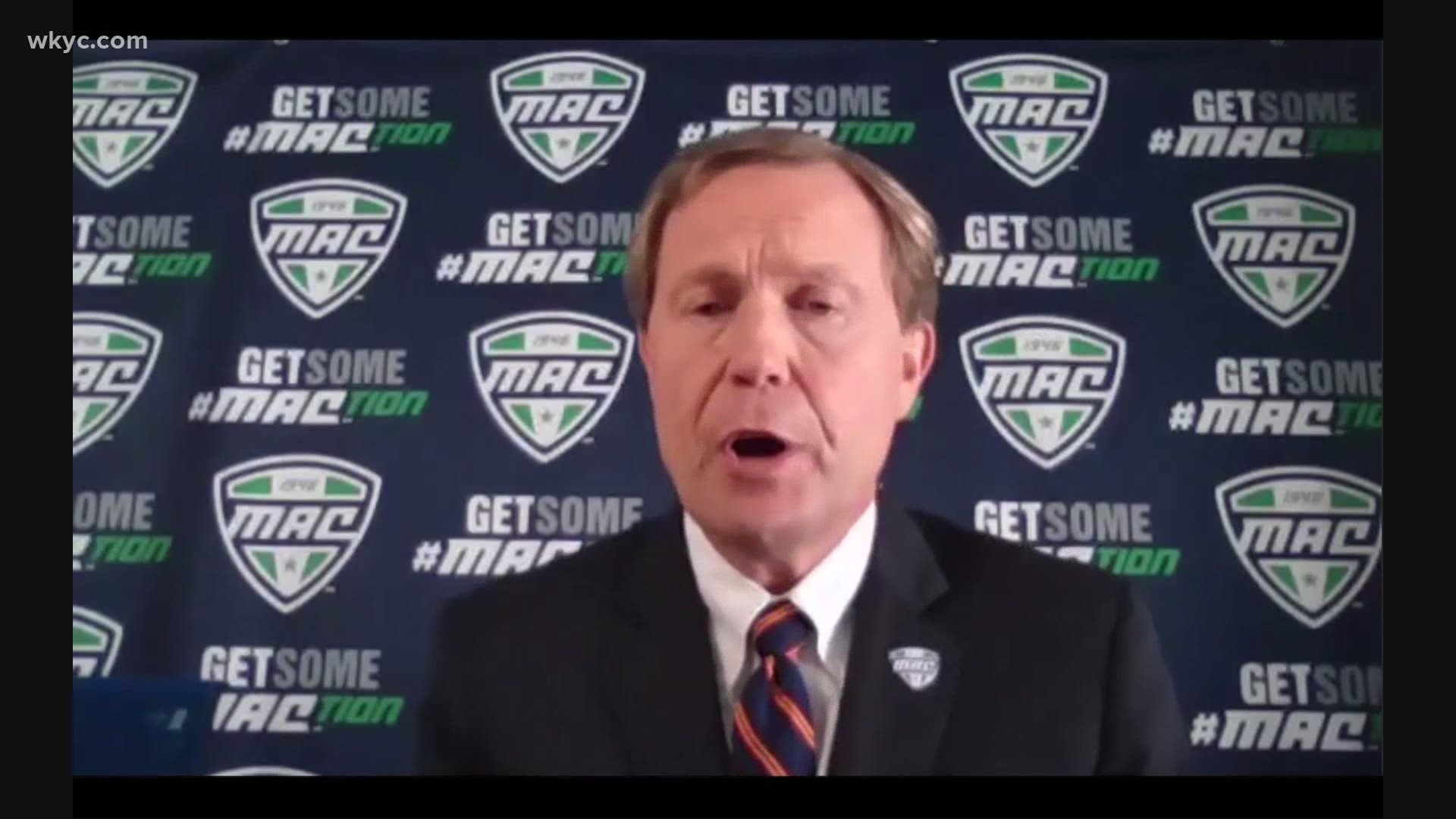 CLEVELAND — The Mid-American Conference has postponed most of this year's fall sports, including football, until spring due to concerns related to the COVID-19 pandemic, Commissioner Dr. Jon Steinbrecher confirmed Saturday.

Other sports impacted include cross country, field hockey, soccer, and volleyball, with golf appearing to be the only competition allowed to take place. The move impacts the University of Akron and Kent State University's teams, and Steinbrecher said the vote to play in the spring was unanimous.

The commissioner called the decision "miserable," but necessary to protect the health of student athletes and others.

"There are simply too many unknowns to put our student athletes in situations that are not easily understood," he said in a press conference this morning. "This is not an easy decision, but it's the right decision."

There were earlier reports that some of the MAC's school members had been pushing the league not to play at all and suggesting they would not compete, even if the conference decided to hold games in the fall, according to CBS Sports. The conference was also financially hit hard by the Big Ten's decision to play conference-only games this season.

"There were 11 Big Ten vs. MAC nonconference games scheduled in 2020 with payouts to MAC schools set to approach nearly $11 million," CBS reported. "Many athletic departments count on those big-money games against Power Five opponents to cover operating costs each season."

"I am proud of our extensive plan, driven by health practitioners and public health experts, for the safest reopening of school possible, and we look forward to welcoming you and your fellow students back to campus for the fall semester. However, there are too many variables in athletics for us to control, and our ability to enhance everyone’s well-being is more limited in athletics than in academics. None of this is fair. In particular, I feel badly for our squads that are here, are working out and are following all of our safety protocols. I want to compliment all of you, including students, coaches and staff, for practicing our Flashes Safe Seven principles, and for doing all you needed to do to protect yourself and others during these past days and weeks. I have never been prouder of you than I am at this moment, and I have never been more disappointed in all of my years in higher education. You did all the right things, you deserve to compete, and yet forces well beyond our control at this moment have prevented us from granting you this opportunity."

"The health and safety of our student athletes, coaches and athletics support staff remain Ohio University’s top priority in the midst of the global health crisis. We are extremely proud of our student athletes and their tremendous accomplishments both in the classroom and on the field of play. We recognize the disappointment that will be felt by the Bobcat nation this fall but it is our hope that we will be able to cheer on the OHIO Bobcats in the spring if it is safe to do so."

All athletes will be allowed to keep their scholarships, and schools are speaking with the NCAA about possibly extending their eligibility. Steinbrecher has also not closed the door on potentially cancelling the season altogether if the coronavirus conditions do not improve by the spring.

The MAC is the first FBS conference to either cancel or postpone its football season due to COVID-19, with some FCS conferences such as the Ivy League doing so months ago. Independent FBS program UConn canceled its season last week, presumably due to scheduling issues with several leagues going to a conference-only slate of games.