Panthers coach Rivera elected to go for two instead of attempting the extra point. The attempt was unsuccessful, Kyle Allen's throw to Greg Olsen fell incomplete. 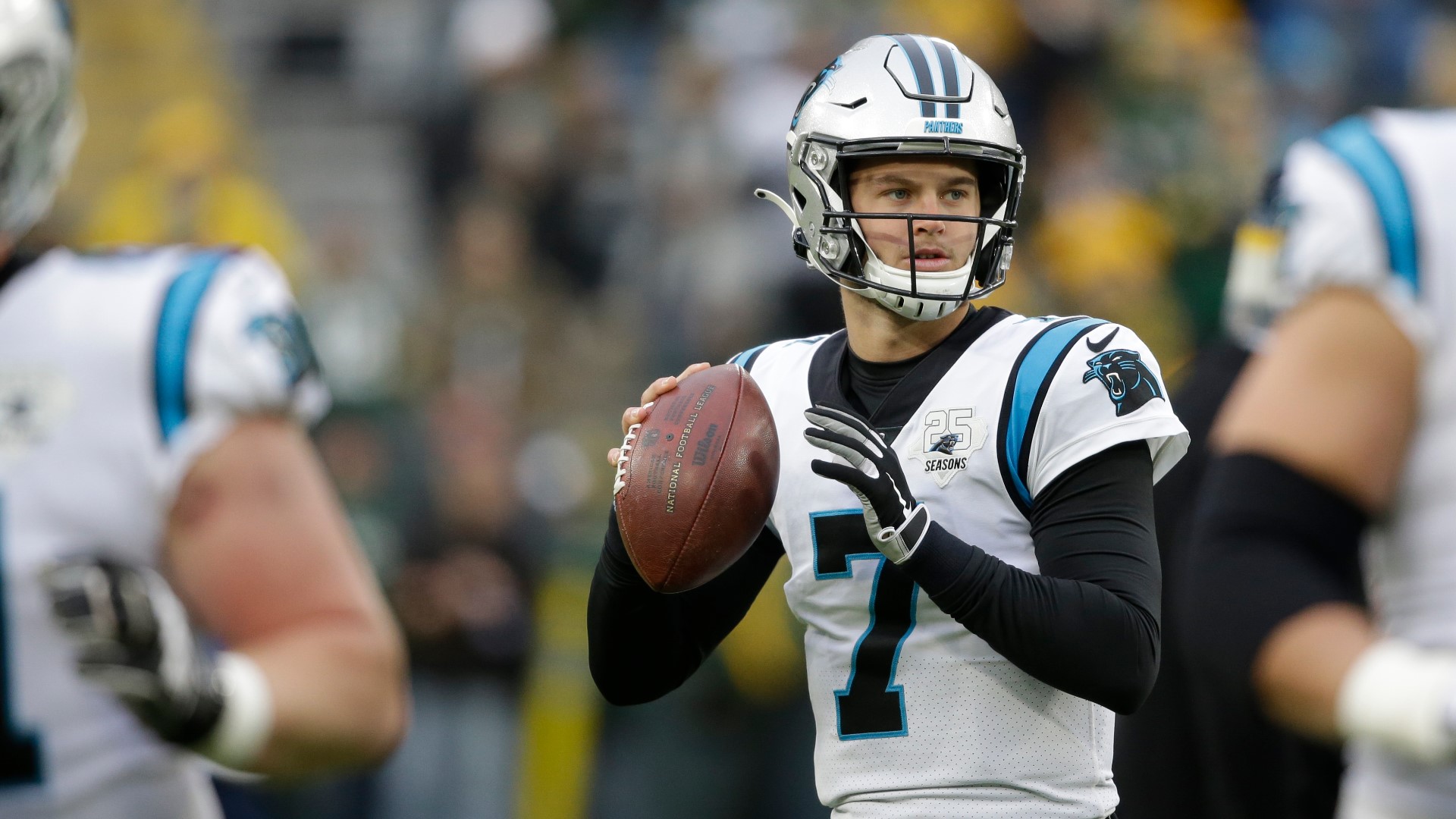 Aaron Jones scored three rushing touchdowns for the second time this season to lead Green Bay (8-2), which improved to 5-2 all-time against the Panthers at home.

The Panthers got the ball back with 2:25 left on their own 11-yard line, trailing by eight. Quarterback Kyle Allen drove Carolina down the field, including completing a 12-yard pass to D.J. Moore on fourth-and-10 with 56 seconds left. The Panthers also benefited from an offsides penalty with 13 seconds remaining to convert another fourth down. After Allen threw an incompletion to McCaffrey, the Packers stopped him just short of the end zone as time expired. A brief replay review upheld the call.

Aaron Rodgers was held out of the end zone, but the two-time MVP completed 17 of 29 passes for 233 yards, including 118 yards to Devante Adams.

McCaffrey had a relatively quiet 108 yards and a touchdown on 20 carries for the Panthers (5-4), who fell to 6-10 all-time against Green Bay. McCaffrey, who entered the day leading the league in yards from scrimmage and touchdowns, also had 33 yards on six catches.

Allen completed 28 of 43 attempts for 307 yards. He also had two costly turnovers. Allen and the Panthers struck first with a 2-yard touchdown pass to Curtis Samuel. 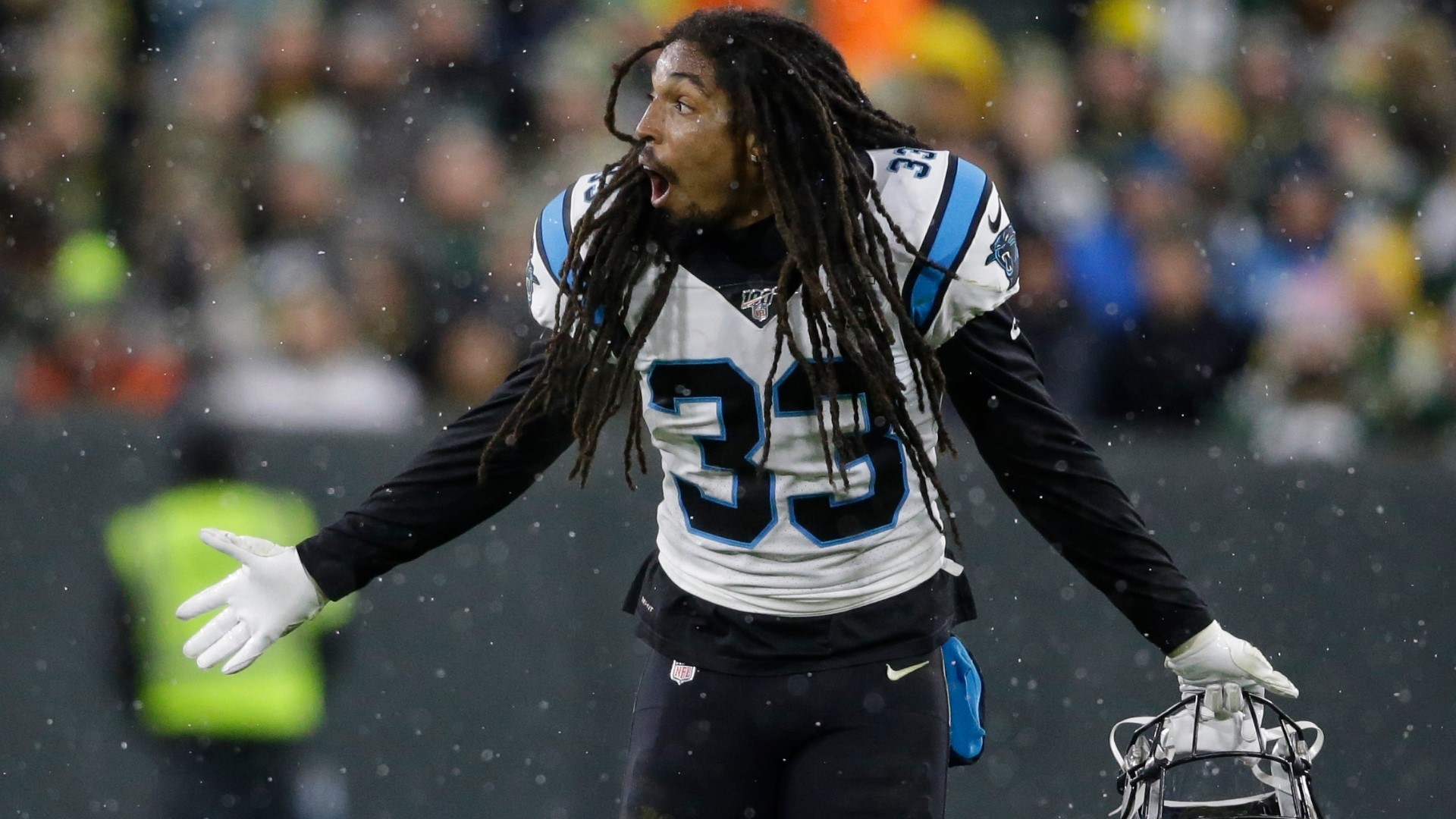 Jones tied it up with a 5-yard touchdown run. Jones now has a career-high 11 scores on the ground this season.

Joey Slye knocked in a 50-yard field goal to put the Panthers ahead 10-7 at the start of the second quarter.

Allen fumbled with 12:46 to play in the second quarter. Montravius Adams recovered it for the Packers, and Rodgers linked up with Davante Adams for a 37-yard gain two plays later. The reception set up Jones' second score of the night, a 1-yard run that put the Packers ahead 14-10 with 9:20 to play in the first half.

Rodgers found Jimmy Graham down the middle for a 48-yard gain with 2:53 to go before halftime. But the Panthers, who are allowing the most rushing touchdowns in the NFL, kept the Packers out of end zone. Green Bay coach Matt LaFleur elected to go for the touchdown instead of attempting the field goal and Gerald McCoy blew up a Jamaal Williams' run to end the first half.

Vernon Butler opened the second half with a sack on Rodgers. The Panthers had two on the day to bring their season total to a league-leading 36. But Rodgers answered by leading a five-play, 75-play scoring drive, highlighted by a 38-yard strike to Adams, a 28-yard run by Jones, and a 13-yard rushing touchdown for Jones that made it 21-10 with 11:50 to go in the third.

Adrian Amos tipped a pass from Allen on the ensuing drive and Tramon Williams collected his ball in the end zone for his first interception of the season.

McCaffrey found the end zone on a 3-yard run to cut the lead to 24-16 with 11:58. Panthers coach Ron Rivera elected to go for two instead of attempting the extra point. The conversion attempt was unsuccessful, as Allen's throw to Greg Olsen fell incomplete.

Smith had two sacks, giving him a career-high 10 on the year.

1 / 4
AP
Green Bay Packers' Jimmy Graham tries to get past Carolina Panthers' Eric Reid after catching a pass during the first half of an NFL football game Sunday, Nov. 10, 2019, in Green Bay, Wis. (AP Photo/Jeffrey Phelps)

Packers: Bye week; Green Bay's latest bye since the bye was reintroduced in 1990.