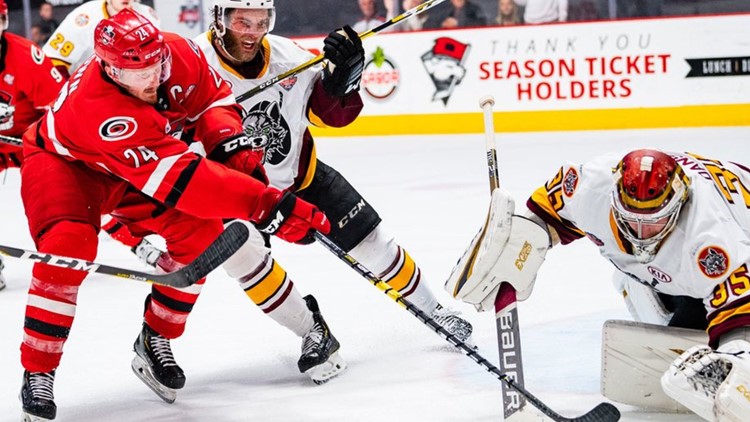 CHARLOTTE, N.C. — The Checkers came out strong in their Calder Cup Finals debut but couldn’t fend off the Wolves in Game 1, falling 4-3 in overtime.

The two sides traded tallies within the first six minutes of play before the Checkers took over in the later stages of the period.

Martin Necas set up and then redirected a point blast from Roland McKeown inside the five-minute mark, followed quickly by Andrew Poturalski threading a shot through on the rush to give Charlotte a 3-1 lead through 20 minutes of play.

The ice would tilt Chicago’s way in the middle frame. The Wolves out-shot the home squad 11-7 in the period and pulled themselves back even with a pair of seeing-eye shots, the latter of which came with just six seconds on the clock.

The Checkers pushed hard to regain their advantage in the third, peppering Chicago goalie Oscar Dansk with 17 shots, but couldn’t put any behind him, sending the contest into overtime.

The extra frame featured quality chances for both sides, including a power play for Chicago that the Checkers promptly killed, but a quick wrister from Stefan Matteau beat Alex Nedeljkovic just over five minutes in to secure a series lead for the Wolves.

The Checkers and Wolves square off again Sunday for Game 2 of the Calder Cup Finals, with the puck dropping at 6 p.m.