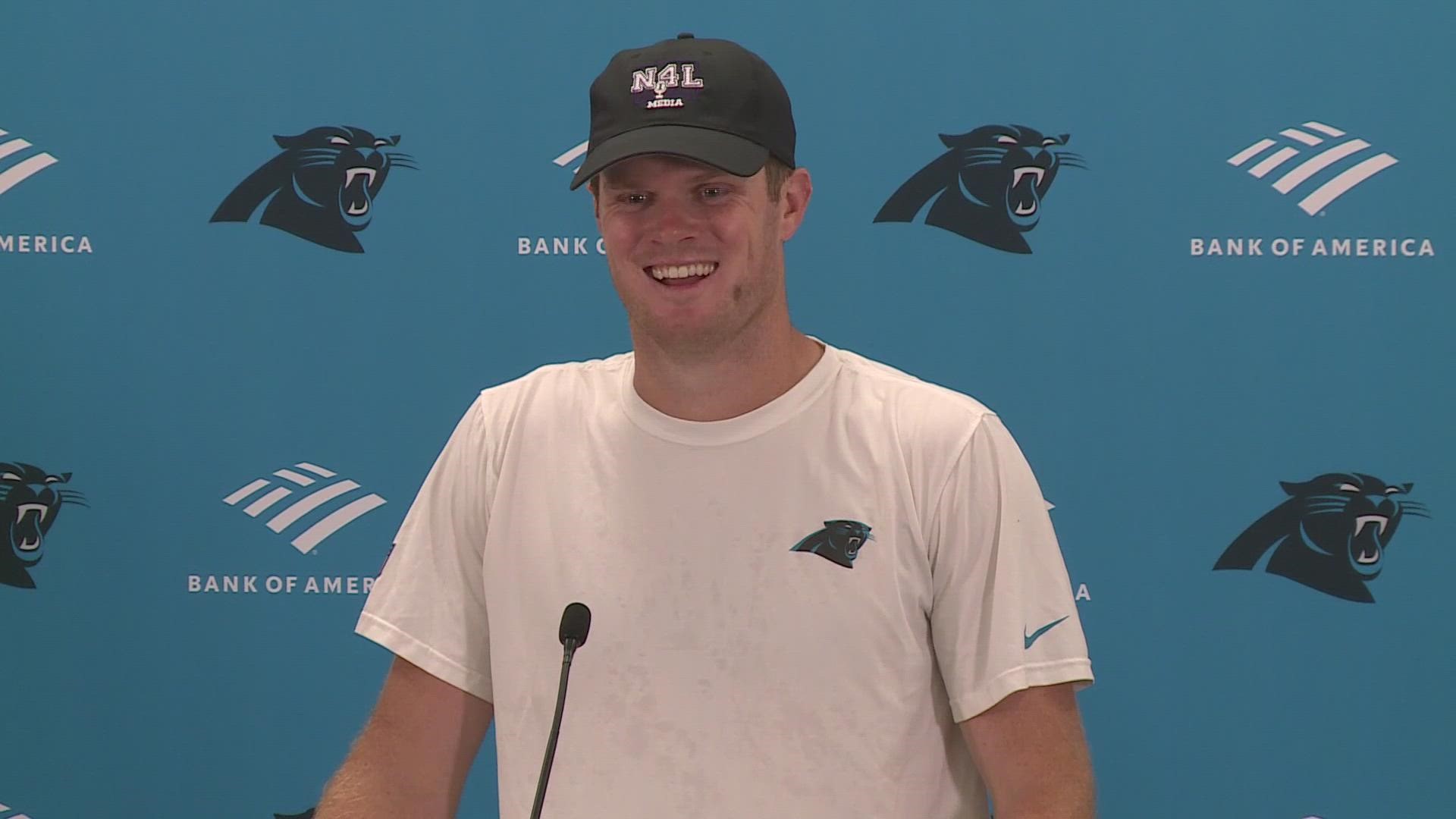 CHARLOTTE, N.C. — The Carolina Panthers begin the 2021 season with a home game against the New York Jets on Sunday at 1 p.m.

New Carolina QB will go up against his old team, and the Panthers look to improve upon last year's 5-11 finish in season two under coach Matt Rhule.

I spend two hours ahead of kickoff for every game, breaking things down on WFNZ radio, so I thought I'd share some of my notes and thoughts on the game here, too.

Every week on Countdown to Kickoff, we do a "Pick Six" segment, breaking down the six biggest questions about the game. After that, I'll share my defensive keys to the game and a prediction.

We will have plenty of Panthers postgame coverage on WCNC Charlotte at 6 p.m., and after Sunday Night Football.

1. HOW DO YOU EXPECT DARNOLD TO PERFORM AGAINST HIS OLD TEAM TODAY?

The formula for this team is Sam Darnold not making catastrophic mistakes, Christian McCaffrey staying healthy and the defense taking the next step.

When it comes to Darnold, I look at the context. His situation in New York was never good. Some of the struggles were on him, but overall I think it was an organizational issue. I think he’s got more help and less pressure here and he’s clearly more relaxed. His issues aren’t going to go away overnight, but I think the Panthers are guiding him through the process of getting him better without asking him to do too much.

2. HOW MUCH SHOULD PANTHERS FANS WORRY ABOUT WILSON?

Wilson looked good in the preseason (against reserves and basic defenses). He has the dynamic ability that you want in today’s NFL. I think he’s turned into a "sure thing" in the last two weeks and I’m not completely sold, yet. This Carolina defense is well-positioned and well-coached, and they should be able to limit him today and get after him.

3. DO YOU THINK (STARTING RIGHT GUARD) JOHN MILLER’S ABSENCE WILL PLAY MUCH OF A ROLE AGAINST THE JETS?

Yes, especially in terms of depth. This O-Line is what reminds you this roster is in year two of a rebuild. But I don’t think Dennis Daley will be a huge drop off. He’s got to adjust to that side, since he's more comfortable on the left. He’s been asked to do a lot and be versatile in his young career, he’s had injury issues. I think they wanted him to grow into a starter. He’ll have to do it right away. But the Jets interior pass rush will be an issue so hopefully Daley can hold his own.

4. WHAT IS THE BIGGEST MATCHUP ADVANTAGE THE PANTHERS WILL HAVE TODAY?

It’s the Carolina receivers against the New York cornerbacks. The Jets listed five outside corners on their depth chart. Only one has started in the NFL, that’s Bryce Hall. Three are rookies – a 5th rounder, a 6th rounder and an undrafted player. They might have to slide their nickel outside. Carolina returns two 1,000-yard receivers (Moore, Anderson), rookie Terrace Marshall looks great, plus you have Christian McCaffrey and a new tight end in Dan Arnold who can get open. Darnold should see separation everywhere today.

The five #Jets listed as outside cornerbacks for Sunday vs. #Panthers have a combined total of 7 #NFL starts.

They all belong to Bryce Hall from his rookie season in 2020.

Justin Hardee is the only other one to have played in a game.

5. WHAT ARE YOUR EXPECTATIONS FOR THE PANTHERS IN 2021?

I expect another step in the right direction. By that I mean – still being in every game but winning some of the close ones (0-8 with chances to at least tie last year). The defense and Christian McCaffrey alone should win you games this year, and if Darnold can make more of the big throws and less catastrophic mistakes, you’re going to push for a playoff spot. The Panthers are still one of the youngest teams in the NFL so there will be some bumps. I think they'll hover around 9-8 or 8-9 and compete for a Wild Card slot.

6. WHO DO YOU THINK WILL BE THE BREAKOUT PLAYER FOR CAROLINA THIS YEAR?

There are obvious choices like Brian Burns or Terrace Marshall. I’m going to say Sam Darnold. Because I think there’s a huge segment of the football world that sees his first three years and is ready to call his career. But I do think he’s in a much better spot. He clearly cares about the craft, and though he’s kind of bland on it, I think he’s really fired up about the Jets giving up on him, and having to deal with everything he did in New Yoork. I don’t think he’s going to be Justin Herbert or Josh Allen or Pat Mahomes, but I think he has a chance to be solid for this team and throw 25 touchdown passes – and for Sam Darnold, that’s a breakout.

KEYS TO THE GAME

Last year it took the Panthers THREE WEEKS to get a sack! That’s not going to be the case this year. It shouldn’t take them three quarters or even three series. This defensive front is more talented and it’s deeper and it has another year under Phil Snow as coordinator. Derrick Brown in year two with DaQuan Jones next to him. Haason Reddick helping Brian Burns get loose. Yetur Gross-Matos, Marquis Haynes have all gotten home in the past.  Zach Wilson may turn in to a good quarterback in the NFL, but he can’t be comfortable today. This game sets the tone for what this defense wants to do. And it sets Burns up for a big year.

2. BE MULTIPLE AND CONFUSE WILSON

We talk about this defense taking the next step this year, but we were encouraged by some of the things we saw last year – and for me it really came to light against the Packers. Aaron Rodgers said he was confused by Phil Snow's schemes. How’d they do it? They used multiple fronts to confuse the protections, and when they could they called aggressive coverages. They should be able to ramp that up this year with the talent, depth and versatility of this defense and with Jaycee Horn helping you play some man coverage in the back. Also, the Panthers blitzed on just 24% of snaps last year – let’s see that number come up. You’ve got more talent and balance to do it.

I think Carolina wins fairly comfortably, with a late Jets touchdown keeping it at one possession. Darnold keeps it simple, throws two touchdowns, maybe one interception for old time's sake. I think McCaffrey has a big game (140 scrimmage yards, 2 total TD). In fact, I think he could have a bigger game but he'll be removed late for load management. The defense has a great game and Brian Burns has two sacks. Maybe Jaycee Horn starts his career with an interception.