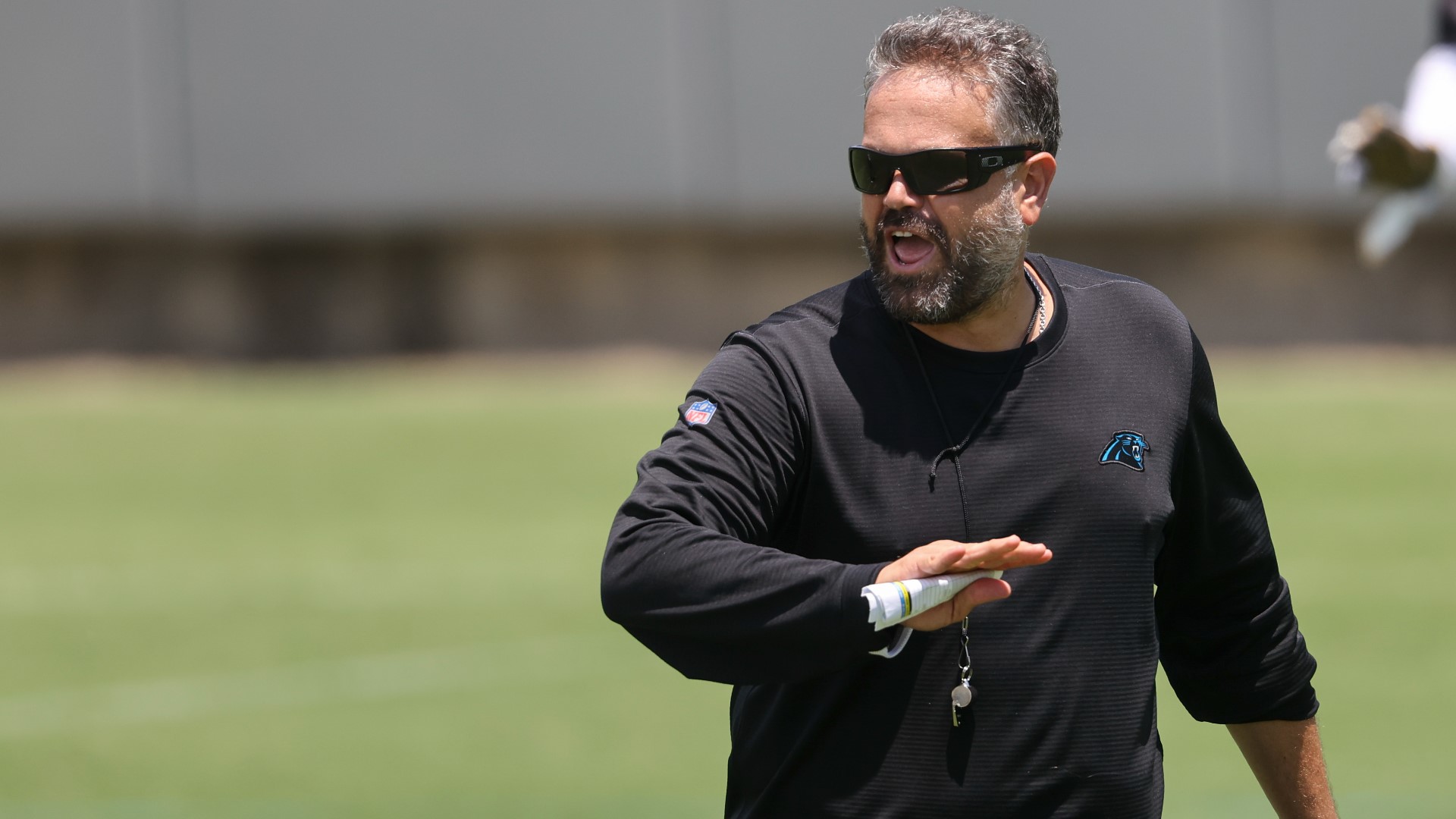 SPARTANBURG, S.C. — Three days in to Panthers training camp, head coach Matt Rhule doesn't have too many takeaways on his team just yet.

The second-year coach took time after practice on Thursday to chat 1-on-1 with WCNC Charlotte Sports Director Nick Carboni.

NC: You and your staff are really into sports science. How does that help you set up practice in the heat and humidity in Spartanburg and keep players healthy, but also help them get better?

MR: We have to work. We have to grind. Everything from hydration to player load. We wear GPS's, we know so much information on each guy. Just trying to keep it individualized. There's a lot of onus on the player to recover and our guys do a great job with that. We have guys that get here at 6:30 in the morning and they take two hours to get ready for practice.

NC: We hoped for a normal year, but how much of last year's COVID protocols do you still have in place?

MR: There's a lot of them. It's different. We've evolved a little bit as a league and as a society with COVID. Things are day-to-day, dealing with the delta variant. I operate under one protocol in a day and it could change. That's what it is for all of us in the world. I think our guys have done a great job. A lot of our guys are vaccinated, and that gives us a lot of freedom.

RELATED: After holding out on a COVID-19 shot, league source says Sam Darnold will be fully vaccinated by the end of July

NC: When you evaluated last season what were you critical of and what did you think you guys did really well?

MR: I'm not thinking about last year too much right now. At the end of the day, we were 5-11. At the end of the day, that wasn't good enough. But we did have a team that stuck together and played hard. And when you have that as your ethos, we didn't just not show up for games. They came out every week at practice and worked hard. We want to carry that over this year and become a better team.

NC: Sam Darnold has been through just about everything in three years in the NFL. How do you approach bringing him into your organization and handling him?

MR: We're teaching him all the aspects of our system. From how we think, to how we play quarterback. He's a tremendous young talent. We all go through adversity. For some people, that breaks them, and for some people that makes them stronger. That's a decision Sam's had to make. I think you see a guy that's letting it make him stronger. He's learned a lot. He's played a lot of good football. He's had some good times and bad times. We just want to make him a really consistent football player.

NC: Right tackle Taylor Moton has taken reps at left tackle. When did that decision come about and why did you guys decide to do that in camp?

MR: We're going to move all of our offensive linemen around and make sure we have depth. Taylor is starting on the right and gets some reps on the left. When the pads come on we'll see how comfortable he is over there.

NC: Do you see anything different from Christian McCaffrey in camp after missing 13 games last year?

MR: I think he got a lot of perspective about the game last year. When you stand on the sidelines and watch and you're able to see the whole picture and you're not engrossed in the moment. I think you see a lot about what it takes to win and lose. I remember he and I walking off the field after one game last year and saying, it's going to take this for us to do it. And us both being on the same page about that. It's great to have him out there. I want him on the field for 17 Sundays this year. I know he learned a lot about what it is going to take for this team to be successful because he had a chance to watch the whole picture.

NC: Defensively you got better at the end of last season and you added talent through the draft and free agency. When you envision the identity of the Carolina Panthers defense what does that look like and can it be accomplished this year?

MR: We want to get it there this year. I want us to be a defense that plays harder than anyone else in the league. Plays hard but also plays with tremendous detail. We don't beat ourselves. We go out there and play with tremendous effort and physicality. We've got the guys to do it. I believe in the guys we have. Everything in life takes time, but we don't have a lot of time in football so we're trying to build that right now and hopefully, we get there.

NC: Tomorrow is "Back Together Saturday" around the NFL. What are you looking forward to about being in front of fans at 7 p.m., practice at Gibbs Stadium?

MR: I think it's awesome for our guys and for us as coaches to feel that energy of the crowd. We didn't have that last season. At the end of the day we do what we do because we love it. But we also do it because we want Panther fans to be proud of who we are and the way that we do things.