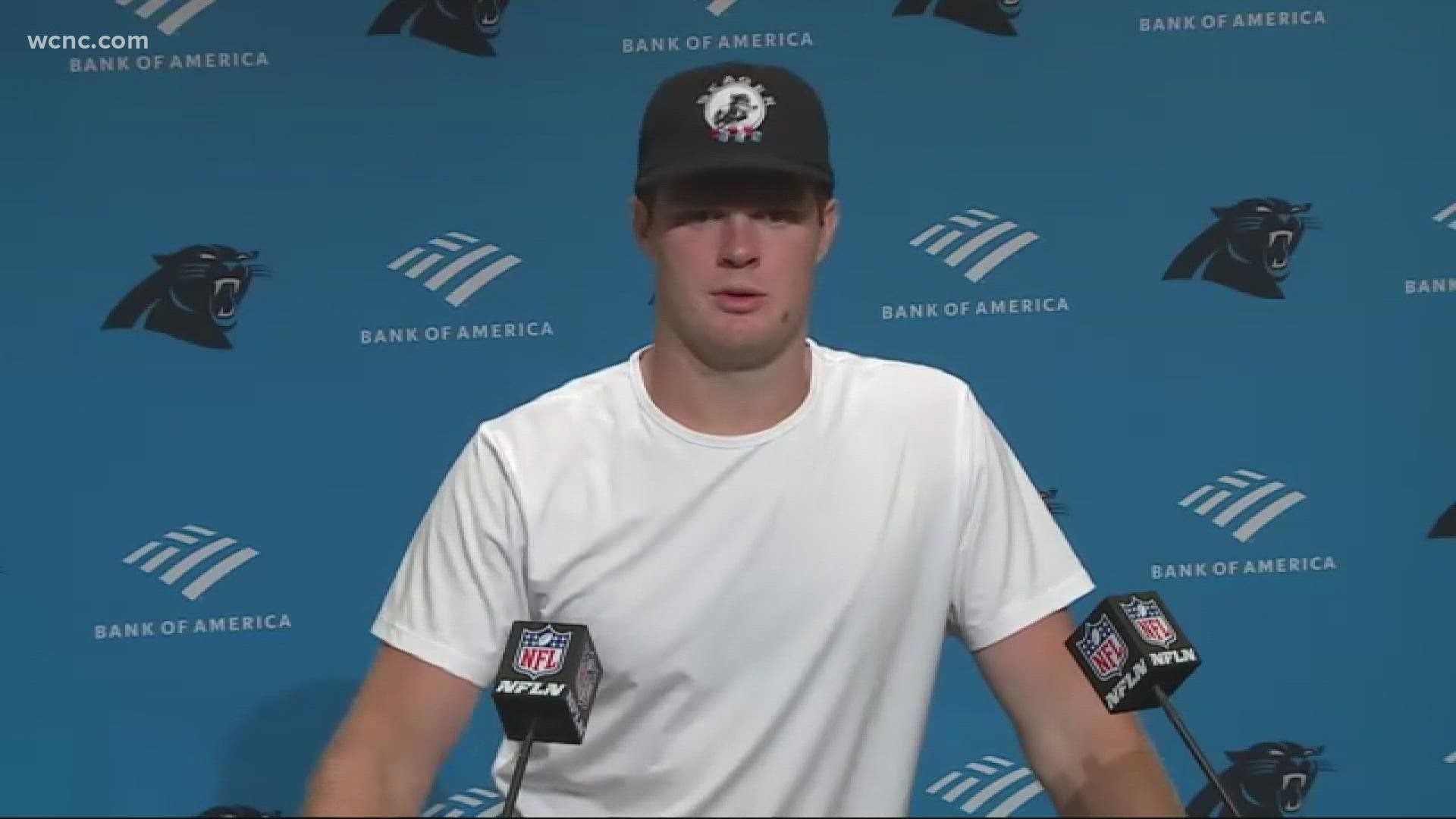 The Panthers won their season opener at home against the Jets, 19-14, while the displaced Saints beat Green Bay, 38-3 in Jacksonville.

With New Orleans still recovering from Hurricane Ida, the Saints are still operating out of Ft. Worth and played last week's game in Jacksonville.

The Saints also have several key players injured for this game, including defensive end Marcus Davenport.

Star cornerback Marshon Lattimore is also unlikely to play after having hand surgery on Tuesday.

I spend two hours ahead of kickoff for every game, breaking things down on WFNZ radio, so I thought I'd share some of my notes and thoughts on the game here, too.

Every week on Countdown to Kickoff, we do a "Pick Six" segment, breaking down the six biggest questions about the game. After that, I'll share my defensive keys to the game and a prediction.

We will have plenty of Panthers postgame coverage on WCNC Charlotte at 6 p.m., and after Sunday Night Football.

1. How much hope should the Panthers fans have because of the Saints injury issues?

You have to feel really good about it if you’re a Panthers fan, especially defensively. The Saints are without their starting center Erik McCoy and Cesar Ruiz, who will slide over, was terrible in pass protection last year. Derrick Brown should be able to get through some. Remember when the Panthers went to New Orleans with the no-name receivers? It’s flipped. This is not a very talented group for the Carolina secondary to cover. And on defense, the Saints being without Marcus Davenport and Marshon Lattimore is HUGE, two of their best defenders.

2. Is this Panthers defense equipped to slow down Kamara?

Have they ever been? On paper, yes. They were very good against the run last week, but this is a different beast, plus Tony Jones played well last week. But regardless of personnel the Panthers have really never been able to contain Kamara. He’s scored in all six games and averages almost 6 yards per carry against them. It’s a huge key to this game, but like a lot of things in this game, until I see Carolina do it, I won’t believe it.

3. Who will play better today? Sam or Jameis?

Who gets better protection? That’s my answer. Carolina’s line only allowed one sack last week against the Jets but Darnold was hit eight times. Jameis wasn’t sacked once against Green Bay and look what he was able to do. Both of these guys are interception prone, especially under pressure. So given the offensive lines, with the Saints having All-Pro tackles, I’ll pick Jameis. I also think he’s the more talented quarterback, overall.

4. Who’s fault were the red zone issues last week, and how can the Panthers improve?

They were Darnold’s fault. He missed Ian Thomas wide open on the seam route in the end zone for an easy touchdown, and then hit his fullback with the ball trying to hand off another time. Overall, these are probably Joe Brady’s issues since the team was towards the bottom of the NFL in Red Zone percentage last year, but zooming in on Week 1 specifically, I’m going to put it on Darnold.

5. How much should Carolina’s kicking instability worry fans?

This has the potential to be a huge problem. Carolina lost a lot of close games last year and I expect them to play in a lot more tight battles this season. The Panthers are on their third kicker in three weeks. And that only includes one game, but that’s not a very good path to be on. They hope that Zane Gonzalez can put a stop to their issues and he had a really good season in 2019,  but was just 16 of 22 last year and got cut by the Lions this off-season. There’s close to zero confidence in that position right now.

6. Did the Panthers deserve the heat they received for the Keep Pounding video board controversy?

Let’s give them the benefit of the doubt and say that they are just trying to make this an organic chant for fans. If that’s the case, why not communicate that ahead of the season or during Week 1? Instead the team just didn’t prompt fans at all, and now say they will in Week 2. I think that should have been the other way around. But really, why not just keep the prompt? It’s very hard for an NFL franchise to develop a homegrown slogan and chant that carries the power and emotion of Keep Pounding, and that should never get lost on this franchise.

DEFENSIVE KEYS TO THE GAME

The reason the Saints were able to do what they did last week is because of Alvin Kamara and Tony Jones. They combined for 103 rushing yards in the FIRST HALF; That allowed the Saints to go on two 15-play drives to pull ahead early and possess the ball for 22 of 30 minutes in that half. Kamara has been a thorn in the Panthers side. He’s got six touchdowns in six career games against Carolina and averages nearly 6 yards a carry. In the first game between these teams last year Carolina missed FOURTEEN tackles. You have to stop these guys first and then make things difficult for Jameis Winston after that.

And that hopefully will lead to difficult decisions. And I’m not just talking about pressuring him, that’s obvious, and I think this Panthers defense can do that. It goes back to my first key and stopping the run. New Orleans averaged over 5 yards on first down last week against Green Bay, and for the most part that allowed Jameis Winston to be in comfortable situations in third down (3rd and 6.5 yards). In fact, he was only in third down 10 times and converted 5 of those. And we’ll see if Carolina is indeed better on third downs than they were last year. They were good against the Jets but the Saints in two games last year? Allowed 64%.

I can tell you one thing. There will be interceptions today. I think by both quarterbacks. Can they help themselves? Darnold and Winston have combined for 127 interceptions in 116 career games.

I think we are in for a fun afternoon. I think the Panthers are better than they were in 2020 as they should be.

I think we will see how for real either team is after a Week 1 where the Saints shocked everybody and the Panthers played a bad team.

The Saints are missing some big-time players and that’s going to help a young Panthers team stay close and in the battle for four quarters.

But even without some of those key players, I think the Saints are talented enough and well-coached enough to pull out a victory here.

And let’s face it, they own Carolina and until they lose one, I’m not sure I can pick Carolina right now. Four-straight and 9 of 11.

Six of the last 11 regular season meetings have been decided by 3 points or fewer. I think this continues that trend, but I think the Saints are still a step ahead as an organization. They win it 24-21.