"Touchdown Confirmed!" | NASA's Perseverance rover has sent back its first photo from the surface of Mars. 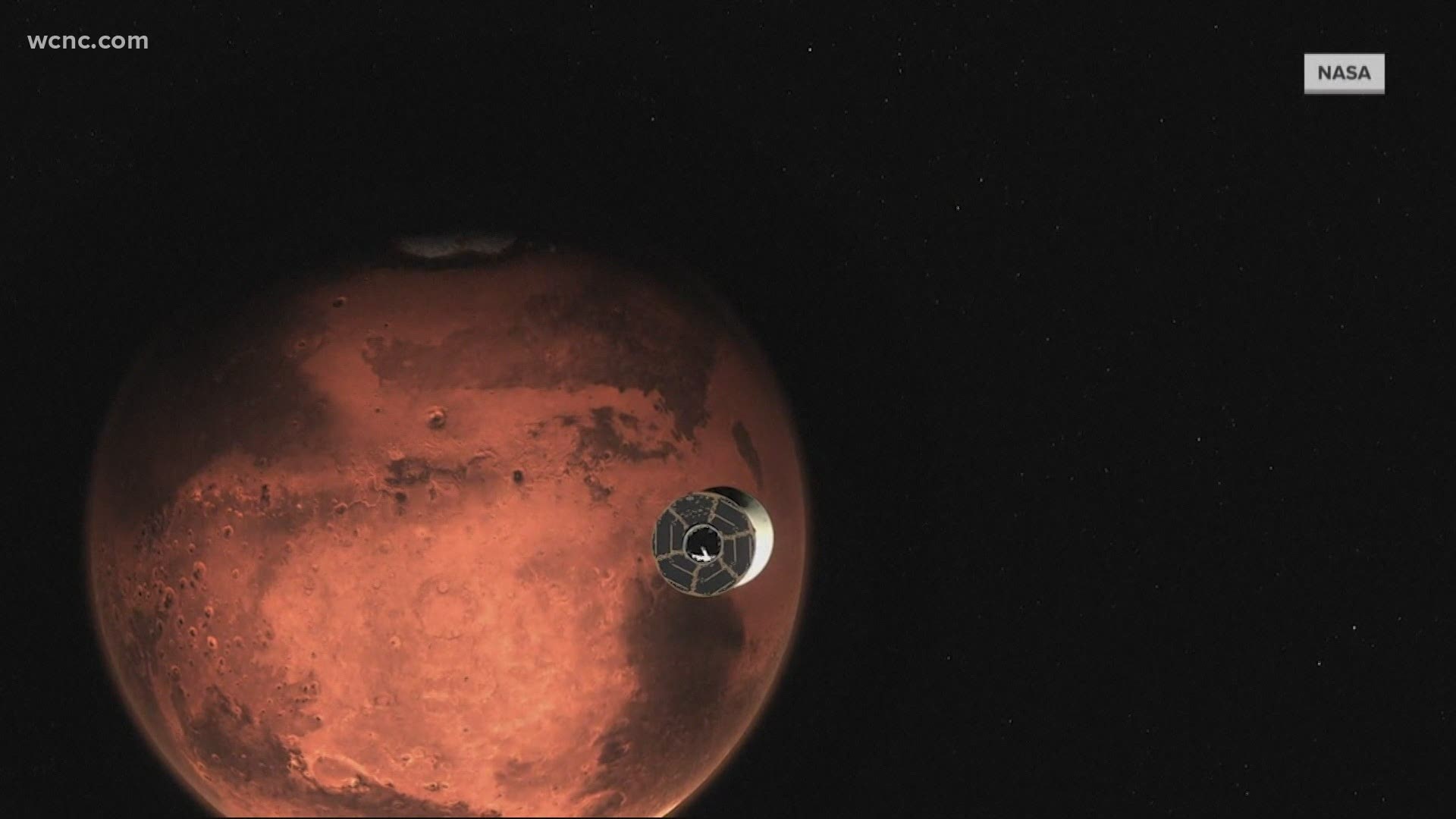 GASTONIA, N.C. — A NASA rover streaked through the orange Martian sky and landed on the planet Thursday, accomplishing the riskiest step yet in an epic quest to bring back rocks that could answer whether life ever existed on Mars.

Ground controllers at the space agency’s Jet Propulsion Laboratory in Pasadena, California, cheered and exchanged fist bumps and high-fives in triumph — and relief — on receiving confirmation that the six-wheeled Perseverance had touched down on the red planet, long a deathtrap for incoming spacecraft.

It took a tension-filled 11 1/2 minutes for the signal to reach Earth.

After nearly seven months of traveling through space, NASA's Mars 2020 Perseverance rover made the successful landing around 4 p.m.

WCNC Charlotte chief meteorologist (and chief science nerd) Brad Panovich hosted a virtual watch party alongside Candice Jordan of the Schiele Museum of Natural History in Gastonia, North Carolina. You can rewatch their excitement below:

During landing, the rover plunged through the thin Martian atmosphere at more than 12,000 mph (about 20,000 kph). A parachute and powered descent slowed the rover down to about 2 mph (3 kph). During what is known as the sky crane maneuver, the descent stage lowered the rover on three cables to land softly on six wheels at Jezero Crater.

Perseverance also is carrying a technology experiment – the Ingenuity Mars Helicopter – that will attempt the first powered, controlled flight on another planet.

“If there’s one thing we know, it’s that landing on Mars is never easy,” said NASA Associate Administrator for Communications Marc Etkind. “But as NASA’s fifth Mars rover, Perseverance has an extraordinary engineering pedigree and mission team.”

The landing marks the third visit to Mars in just over a week. Two spacecraft from the United Arab Emirates and China swung into orbit around Mars on successive days last week.

Perseverance, the biggest, most advanced rover ever sent by NASA, became the ninth spacecraft to successfully land on Mars, every one of them from the U.S.

NASA has nailed eight of nine landing attempts, making the U.S. the only country to achieve a successful touchdown. China hopes to become the second nation in late spring with its own life-seeking rover; its vessel entered orbit around Mars last week along with a United Arab Emirates spacecraft. The red planet's extremely thin atmosphere makes it hard to get down safely. Russia has piled up the most lander losses at Mars and moon Phobos, beginning in the early 1970s. The European Space Agency also has tried and failed. Two NASA landers are still humming along: 2012′s Curiosity rover and 2018′s InSight. Launched last July, Perseverance will set down some 2,000 miles (3,200 kilometers) away at Jezero Crater, descending by parachute, rocket engines and sky crane. The millions of lines of software code and hundreds of thousands of electric parts have to work with precision. “There’s no go-backs. There’s no retries," deputy project manager Matt Wallace said Wednesday.

NASA has equipped the 1-ton Perseverance — a beefier version of Curiosity — with the latest landing tech to ace this touchdown. A new autopilot tool will calculate the descending rover’s distance to the targeted location and release the massive parachute at the precise moment. Then another system will scan the surface, comparing observations with on-board maps. The rover could detour up to 2,000 feet (600 meters) while seeking somewhere safe, Neil Armstrong style. Without these gizmos, Jezero Crater would be too risky to attempt. Once down, the six-wheeled Perseverance should be the best driver Mars has ever seen, with more autonomy and range than Curiosity. “Percy’s got a new set of kicks," explained chief engineer Adam Steltzner, "and she is ready for trouble on this Martian surface with her new wheels.”

This illustration depicts NASA's Perseverance rover operating on the surface of Mars. Perseverance will land at the Red Planet's Jezero Crater a little after 3:40 p.m. EST (12:40 p.m. PST) on Feb. 18, 2021.

LOOKING FOR SIGNS OF LIFE

Where there was water, there may have been life. That’s why NASA wants Perseverance snooping around Jezero Crater, once home to a lake fed by a river. It’s now bone dry, but 3.5 billion years ago, this Martian lake was as big and wet as Nevada and California’s Lake Tahoe. Perseverance will shoot lasers at rocks judged most likely to contain evidence of past microscopic life, analyzing the emitted vapor, and drill into the best candidates. A few dozen core samples — about a pound’s worth (one-half kilogram) of rock and dust — will be set aside in sealed titanium tubes for future pickup.

Scientists have wanted to get hold of Mars rocks ever since NASA’s Mariners provided the first close pictures a half-century ago. NASA is teaming up with the European Space Agency to do just that. The bold plan calls for a rover and return rocket to launch to Mars in 2026, to retrieve Perseverance’s stash of samples. NASA expects to bring back the rocks as early as 2031, several years before the first astronauts might arrive on the scene. The rover’s super sterilized sample tubes are the cleanest components ever sent into space, according to NASA, to avoid any contaminating traces of Earth.

Speaking of clean, NASA’s Mars Mission Control has never been so spotless. Instead of passing around jars of peanuts right before Perseverance’s landing — a good luck tradition going back decades — masked flight controllers will get their own individual bags. It’s one of many COVID-19 precautions at California’s Jet Propulsion Laboratory. The landing team will be spread over multiple rooms, with NASA bigwigs and journalists watching remotely. Launched last July, the aptly named Perseverance bears a plaque honoring health care workers battling the virus over the past year.