Both northbound and southbound traffic along this section of I-77 are reduced from four lanes to two lanes to maintain traffic flow in both directions. 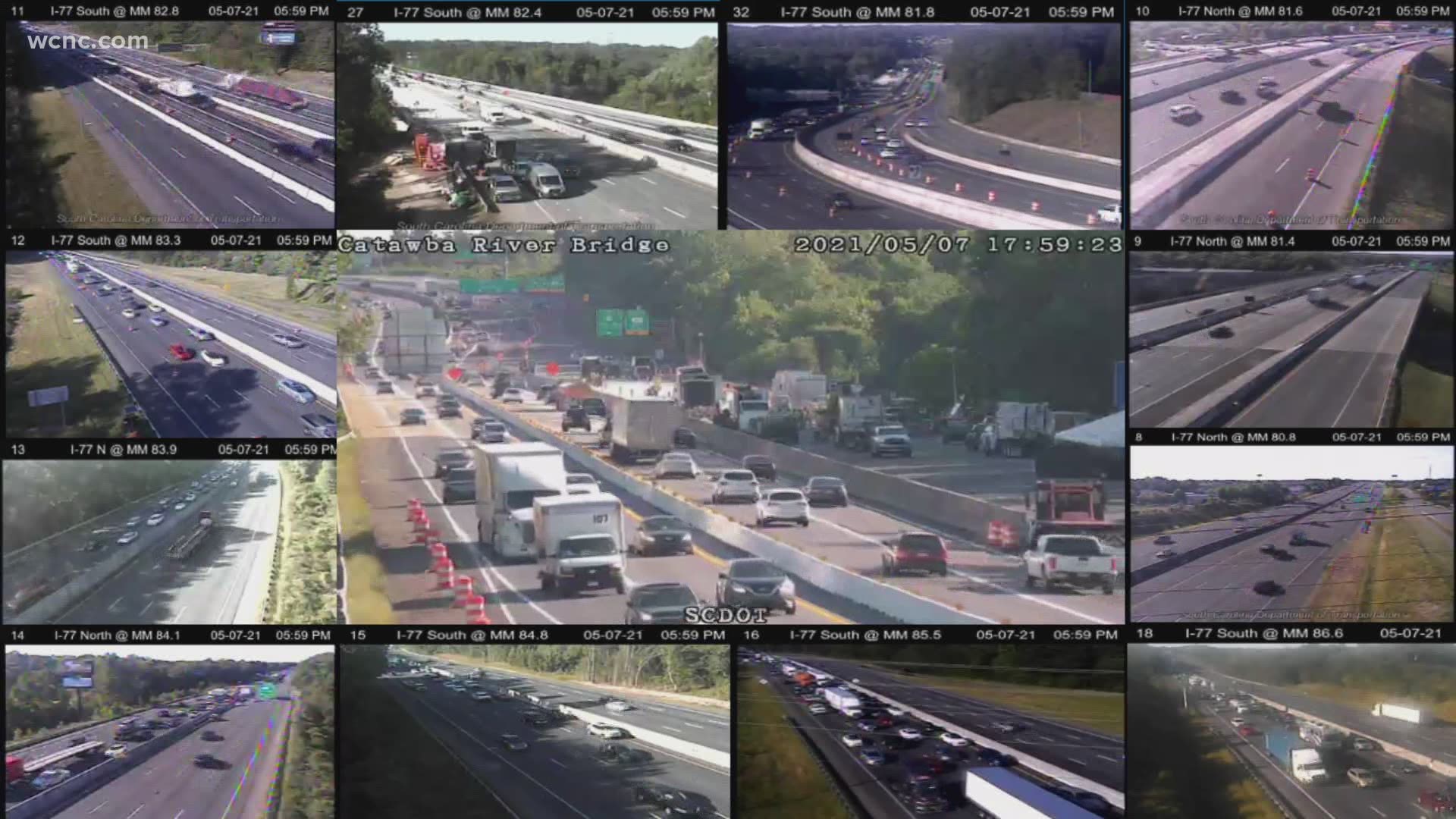 South Carolina Department of Transportation decided the most efficient way to make all the necessary repairs to the bridge was to shut down the southbound side of I-77 between Sutton Road in Fort Mill and Cherry Road in Rock Hill.

Work is expected to continue through Monday, May 24 at 5 a.m.

"Unfortunately what that means for us, is there is going to be heavier traffic on our traditional streets especially in the morning and afternoons when parents are picking up and dropping off students," Burke said.

Fort Mill School District said some buses will have new routes. The district reminding parents and staff it's going to be a rough ride.

"We talked to all our principals, they all know it's coming, they know they are going to have a late bus, a late student being dropped off so they're going to be leaner on how that gets put with tardiness and things in the classroom," Burke said.

It's all in an effort to keep people safe and keep construction running smoothly.

"They're going to be redoing the entire bridge right, so anytime someone was going to be underneath it whether it's a tube or kayak they're going to have to stop construction," vice president of marketing and communication for Visit York County, Brianna Francis said. "We don't want this to last any longer than it's supposed to so the point is no one needs to be on the river to delay that construction."

For those planning to head to Carowinds when they re-open, tourism county officials offer some advice.

"If you are making a reservation time for Carowinds, make sure you are looking ahead to adding possibly an hour to your drive," Francis said.

As with most construction projects, there's a lot of confusion about how it will work or affect traffic. WCNC Charlotte verifies some of the claims online and is letting you know what's true and what's not.

Our sources for all of these are the South Carolina Department of Transportation and the York County Sherriff’s Office.

1. Can I still use Catawba River for boating, tubing or fishing?

According to the York County Sherriff’s Office, we can verify you can use the river during this time. However, the seven major river access points will be closed from Tega Cay to Rock Hill for the duration of the project.

Bottom line: If you plan to use the river, you'll have to go north of this area to access the water

RELATED: 'Avoid it like the plague' | Planned I-77 south closure in Rock Hill coming next month

2. If there's an accident, can an ambulance or tow truck get to it with the closures in place?

Yes. According to the York County Sheriff's Office, emergency crews will be able to access crashes in the work zone during construction.

If you are involved in an accident and no one is hurt, officials are asking you to move to the nearest emergency lane and wait for law enforcement to help.

3. Will the northbound side of I-77 get renovations following the southbound closure?

According to Leland Colvin with SCDOT, yes; however, there is no specific date for when those renovations will take place.

Traffic slowed down and backed up I-77 on Friday. Deputies re-routed all southbound traffic onto the northbound bridge earlier in the day.

"I've had to change my work schedule so I'm actually going in an hour early and heading home an hour early so that I can bypass all that cause with school zones," driver Laurie Galster said. "They should've waited until school was out to at least alleviate some of that so there's less traffic, but this is just the beginning so we'll see."

"Were just asking folks to please slow down, pay attention to the most important thing that you're doing behind the wheel which is driving. Stay focused, stay off your phone, get through that half-mile stretch the best you can," York County Sheriff's Office Public Information Officer, Trent Faris said.

"We had to go to school, pick him up, we had to move up, stop, move up and stop. It's pretty bad," driver Troy Moree said.

If there's something online you'd like the WCNC Charlotte VERIFY team to look into, send us an email. The address is verify@wcnc.com.

The project is set to end on May 24, SCDOT officials suggest you plan ahead and use alternative routes.