If approved, stops in Asheville and Wilmington would be added to service already including Charlotte, Greensboro and Raleigh. 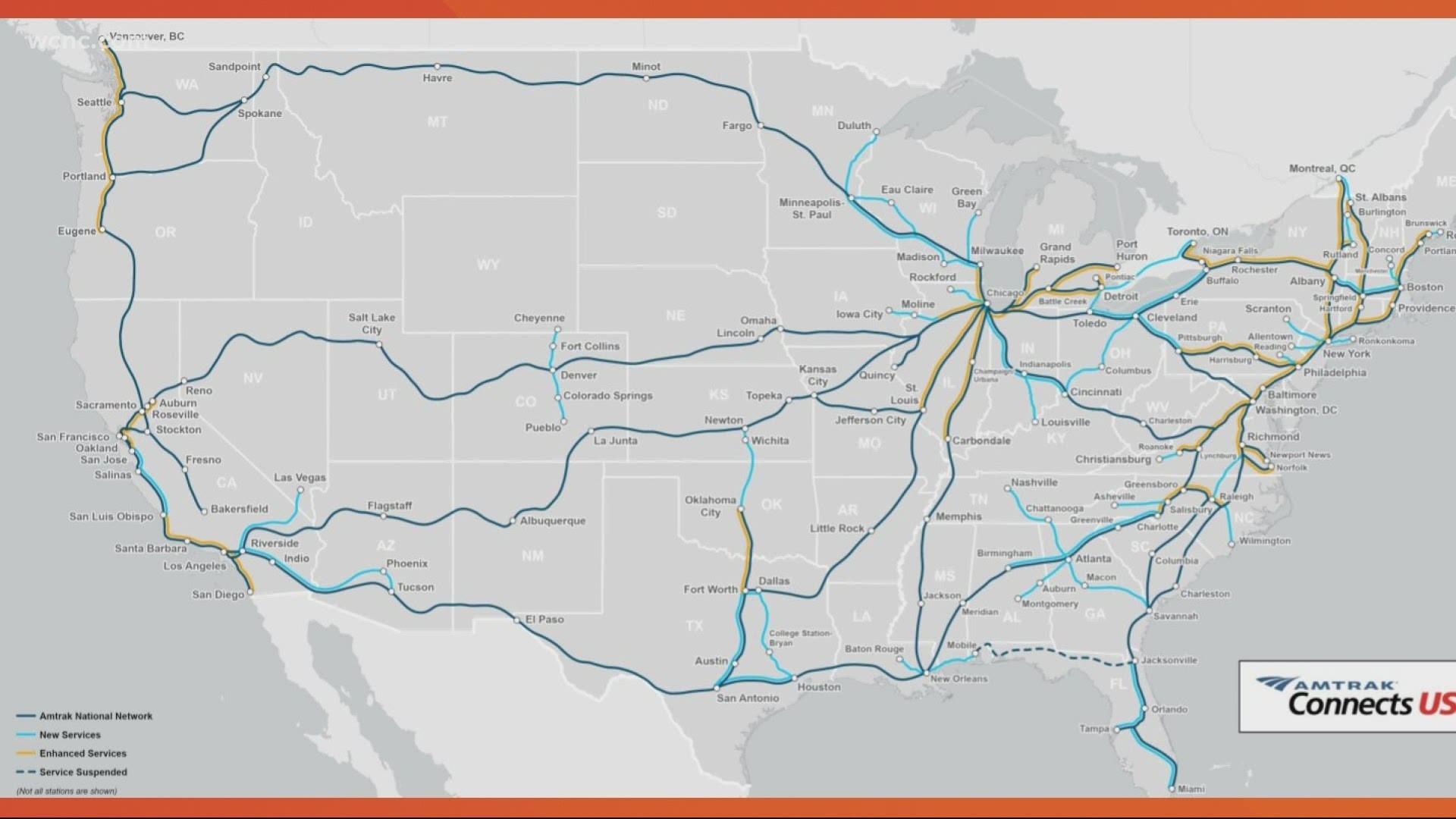 CHARLOTTE, N.C. — Amtrak has released their 2035 Vision plan which proposes new and expanded passenger train services in the Carolinas and across the United States.

If this proposed plan were to become reality, it would introduce Amtrak rail service across North Carolina from the mountains to the coast. A new line -- proposed to bring service as far west as Asheville and as far east as Wilmington -- would link to existing rail service already in Charlotte, Salisbury, Greensboro, and Raleigh.

The existing corridor, which parallels Interstate 85 through the state's largest cities, is also proposed to receive new, enhanced service.

"Amtrak has met with stakeholders across the U.S. – state officials, mayors, businesses, and others – to identify their local needs and expectations," Amtrak says in their newly released plan. "Our vision incorporates this input and we will work in partnership with stakeholders to grow and improve passenger rail."

The proposed plan would also create a new service between Charlotte and Atlanta.

"Major cities like Houston, Atlanta, and Cincinnati have service that is simply inadequate, with trains that only stop once a day and often in the middle of the night," Amtrak said.

North Carolina is currently serviced by rail service operated by Amtrak and the North Carolina Department of Transportation. Some of those trains operate within the state while others continue out-of-the-state through the rest of Amtrak's national network, including with service to destinations like Washington, DC, and New York.

Cities like Charlotte are also putting forth their own long-term plans.

The city's current plan calls, which would add a new rail, bus, bike, and greenway opportunities, would need a $4 to $6-billion investment from the federal government.

"We want to partner with communities like Charlotte," Transportation Secretary Pete Buttigieg said in a recent interview with WCNC Charlotte's Ben Thompson for the Sunday morning public affairs show Flashpoint.

"It's music to my ears when you talk about a multi-modal approach," Buttigieg said. "We need to make sure residents have as many options as possible."