When will allergy season peak in 2021? An allergy forecast 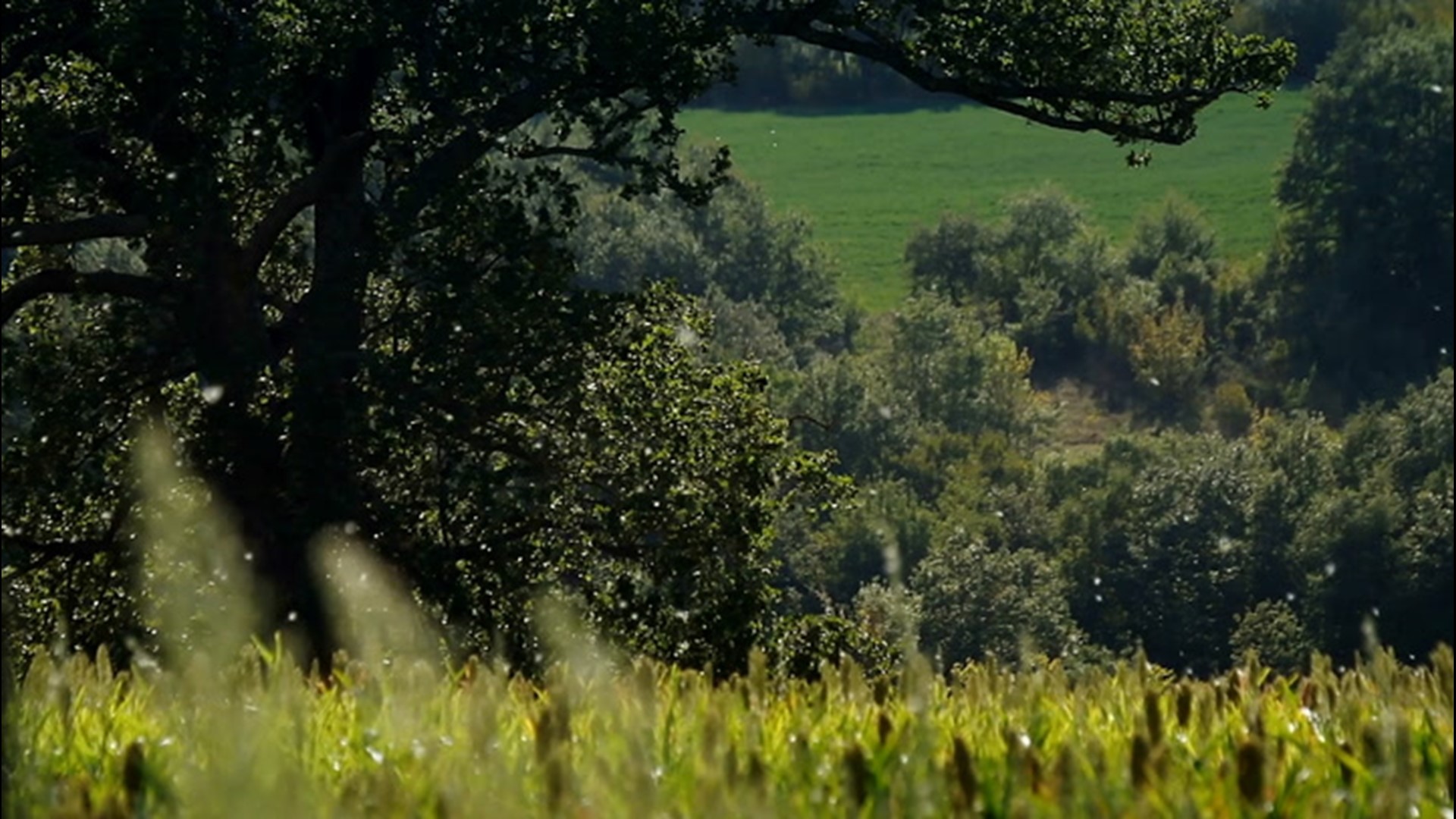 Spring is creeping up fast in the United States, and that means warmer weather is on the horizon after a rough winter in some regions, but for those who suffer from seasonal allergies, there may only be a few weeks left in some parts of the country before allergens begin to kick into full gear. And one part of the nation is already beginning to feel the effects of the spring pollen season.

AccuWeather meteorologists, led by Senior Meteorologist Alan Reppert, released their annual spring allergy forecast this week, after digging into the data and exploring which areas of the country may experience an early or extended season as well as which areas could face higher-than-usual pollen counts.

Simply put, different allergens will begin to affect Americans at different points in the season, depending on the region and the weather conditions. AccuWeather forecasters have you covered on where in the U.S. allergy sufferers may need to stock up on tissues -- and keep the windows closed at times this upcoming season.

March and April are typically when tree pollen begins to take off in the U.S. People with oak, maple, birch, elm, sycamore and hickory allergies in the mid-Atlantic region of the U.S. will begin to feel their allergies come on this month.

"By the time we reach summer, the trees are in full bloom, and you can tell this when you go to your car and you see these pollen grains on your windshield," Tversky said. The pollen grains people see building up are too large to actually be the cause of people's allergy symptoms, but they do signal that allergy-causing pollen is in the air.

The Southeast is already beginning to experience the first effects of allergy season. Trees around the Gulf Coast in particular, Reppert said, have begun releasing pollen.

Tree pollen counts for the Northeast are forecast to be around average for most of the region this year, with some above-average tree pollen forecast for the area surrounding the Great Lakes beginning in mid-March and extending through April.

This season could end up being a nasty spring season for tree-allergy sufferers in the Midwest as the weather warms up.

Midwesterners, including those who live around metropolitan areas like Chicago and Detroit, could experience some of the worst conditions for tree pollen this season.

In contrast, across the Plains, tree pollen should be on par with what is considered average for the region.

Southwest residents with tree allergies will be the only ones that will truly be able to rejoice -- with an expected drought and higher-than-usual temperatures on the horizon, tree pollen counts in the region are expected to remain low throughout the season.

"Anything that does grow will be pretty quick to die off," Reppert said. "When the grass [and] weeds dry out and have no rainfall for some time, it will actually stunt the grass and weed growth and not allow it to really grow."

The highest above-average pollen counts will be focused in the northernmost portion of Virginia into southern Maine. The Great Lakes region, including Michigan, northern Ohio, as well as northwestern parts of Pennsylvania and western New York, will all experience higher-than-average grass pollen counts.

Grass pollen could also spell trouble for the northernmost part of the Midwest, most prominently in Michigan, Ohio and parts of Wisconsin. The eastern half of the region can expect above-average weed pollen levels, while the western half will experience normal levels.

Above-normal levels of grass pollen are forecast to extend into the northern Plains, but the rest of the region should align with levels typically observed in the region.

Grass pollen is forecast to come in with near-normal counts for Nevada, Utah and Colorado but will be well below the average for other parts of the Southwest this year, such as across New Mexico, Arizona and western Texas.

Spring allergy sufferers in the Southeast could be facing a double whammy this year. Forecasters not only expect above-average grass pollen levels across the region, but also weed pollen counts are predicted to reach well above average during allergy season.

"There is some overlap there between grass pollen and weed pollen that's going to be quite high, especially in parts of the Southeast along the Atlantic Ocean," Reppert said. Virginia, the Carolinas, Maryland, Delaware and Florida will feel the weed pollen most acutely in June. In states farther north along the Eastern Seaboard, weed pollen counts will rise into August.

The Southwest will be split in how it is impacted by weed pollen this year. Nevada, Utah, Colorado, most of New Mexico and western Texas will have below-average weed pollen. Most of Arizona and central New Mexico will be on par with previous years, however.

Southeastern Arizona and southwestern New Mexico will experience above-average weed pollen near the border of the U.S. and Mexico.

Another region that's in for a long and potentially tough season ahead will be the Northeast, according to AccuWeather forecasters. Projections call for weed pollen levels to be consistently above average throughout the entire Northeast this year.

In the West, allergy sufferers may skate by with fewer problems. Weed pollen is forecast to be in the average range for the Pacific Northwest, but California's weed pollen levels could be below average for the season.

Another layer of complexity as the pandemic persists

On top of a harsh season expected for some regions of the country with overlapping pollen seasons, COVID-19 adds another layer of complexity, Tversky said. Seasonal allergy symptoms can get complicated, especially where their symptoms appear similar to the new coronavirus.

"Some of the symptoms that are associated with COVID-19 infection include congestion, stuffy nose, feeling a little bit unwell -- even loss of sense of smell for some patients," Tversky explained. Because of the similarities between symptoms of seasonal allergies and symptoms of the coronavirus, a person experiencing allergies amid the pandemic "can be a little bit problematic," as they may not be able to tell what is ailing them.

Despite the confusion with seasonal allergies during the pandemic, Tversky, who specializes in chronic sinus disease, said last spring he anecdotally witnessed a sharp drop in people experiencing their typical seasonal allergy symptoms because they were staying inside more than usual.

"Enough patients said this where I thought, ‘Oh, this might be a real phenomenon," Tversky said.

A year into the pandemic, though, Reppert said people are looking to get outside more to enjoy nature, and this change of scenery could put them at increased exposure to allergens.

"It could be a double-edged sword because people want to go out, get away, go more into nature and go more into the woods," Reppert said.

For people who want to avoid the worst of their allergens, Reppert said there are steps that can be taken to minimize exposure to pollen and symptoms.

"After it rains is normally a good time [to avoid allergens]," he said. "Before it rains, there's a lot more pollen in the air, and it can be washed out with the rain that comes through."

He did warn, however, that some people suffer from thunderstorm-related pollen allergies, as pollen can be lofted into the air as storm moves into an area.

Morning hours are also ideal for evading pollen, before plants have had the full opportunity to respond to the sunlight and bloom.

Tversky also noted that a common mistake people with allergies make is over-vacuuming their homes in an attempt to remove dust.

"You'll never get rid of all the dust," he explained, and "all you're doing with that vacuuming is kicking up the dust that's there."

Keeping windows closed during allergy season is a great way to prevent bringing pollen or other allergens into your home. There are also many over-the-counter allergy medications that people can take as needed.

"You might even go as far as keeping an eye on the pollen counts through your local AccuWeather network or allergist networks that post that information," Tversky said. "On very high pollen count days, that may not be the day that you want to spend browsing around outside very much."

He suggested people who suffer from seasonal allergies see a doctor, so they can pinpoint the exact allergen that is the trigger.

"I wouldn't be doing my job if I didn't say for folks that are really suffering that it's critical they consider seeing an allergist," Tversky said. "It's important to see what you're actually allergic [to] and then you can tailor your treatment to your sensitivities."