Winter storm brings snow and rain to the Carolinas

The North Carolina mountains got snow while most of the Piedmont received very cold rain with chilly temperatures across the region. 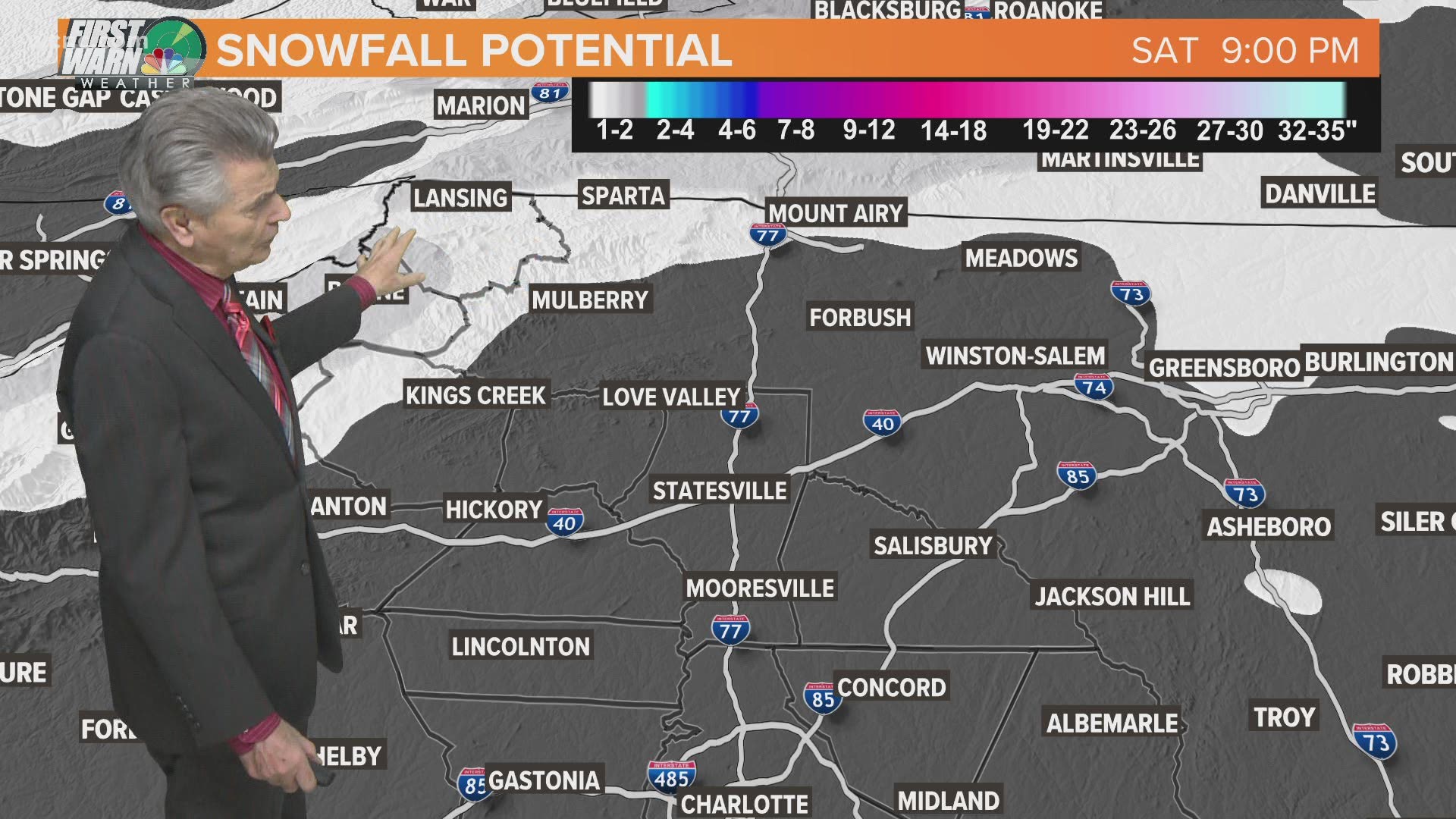 CHARLOTTE, N.C. — A pair of storm systems moving across the country will bring wintry weather to the North Carolina mountains Wednesday night, with up to 5 inches of snowfall possible on the mountain tops.

First Warn chief meteorologist Brad Panovich said the majority of snow will be in the mountains but there's the possibility of flurries in the foothills, and as far south as Statesville and Salisbury. Just don't expect any accumulation in those areas, mostly wet roads with a lot of rain mixed in.

Winter Storm Warnings are in effect for Ashe, Mitchel, Avery, and Watauga counties in northwest North Carolina. Winter Weather Advisories stretch along the Virginia border all the way to the coast, including the Winston-Salem and Raleigh areas.

RELATED: You know you live in the Carolinas when ...

Who will see snow?

Despite the highest accumulations staying well north of Charlotte, Panovich believes there could be a surprise burst of snow north of the Queen City.

"Nothing for the Piedmont but that doesn't mean we won't see any weather here," Panovich said. "I actually think maybe we could see a burst of snow in some northern areas, maybe Catawba County, Iredell, Rowan, maybe even Cabarrus County."

Snowfall potential late tonight & early Thursday. The mountains see the main show, but we could see a few flakes from Hickory-Statesville-Salisbury, not much of an impact just wet roads & lots of rain mixed in. Higher amounts possible east around 1-2" #snOMg #cltwx #ncwx pic.twitter.com/6fJx3UsxzV

Panovich expects Wednesday's rain to linger in the mountains before mixing and eventually turning to snow around 8 p.m. The transition will be dependent upon the elevation, with areas above 3,500 feet being more likely to see heavier snow.

The rain is expected to change to snow along the I-40 corridor early Thursday morning, around 2 a.m. By 3 a.m., Panovich says the models are showing a burst of snow all the way from Greensboro to the coast and down to Raleigh. This could also expand south.

Charlotte will at most see a rain/snow mix but there is a better chance for a burst of snow in Iredell, Rowan, Stanly, and Cabarrus County. Any accumulation will be little to none with more falling closer to Raleigh.

It's going to be quick, like boom and then it's out of here.

By 8 AM most of the area should be rain and snow-free with many locations drying out much earlier than that!

Winds will also increase, gusting up to 30+ mph for the Mountains. This will create wind chills in the single digits starting off your Thursday in the Mountains. Winds will lighten up some late day.

RELATED: Graupel fell in the Carolinas. Here's what that means.