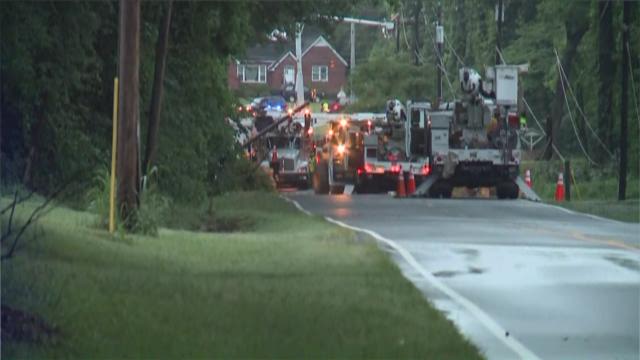 Heavy rain fell across the region, with some parts of Union and Chester counties seeing nearly three inches of rainfall. As of 6:53 a.m., over 1,200 people in Mecklenburg County were without power. In Gaston County, the number of people without power was over 200.

A busy overnight with large trees down on roads all over Town; kudos to our Public Works employees who've been out clearing them for commute

Several trees fell in the Huntersville area overnight, including this one on Asbury Chapel Road.&nbsp;

Another fell in the corner of Colony Road and Runnymede Lane in Charlotte.

<p>Downed tree in the corner of Colony Road and Runnymede Lane near SouthPark neighborhoods. Photo by Trey Maggio/NBC Charlotte. </p>

Chief Meteorologist Brad Panovich says while there are pockets of heavy rain, there will be a lull Monday before the next wave of rain later that night and into Tuesday. 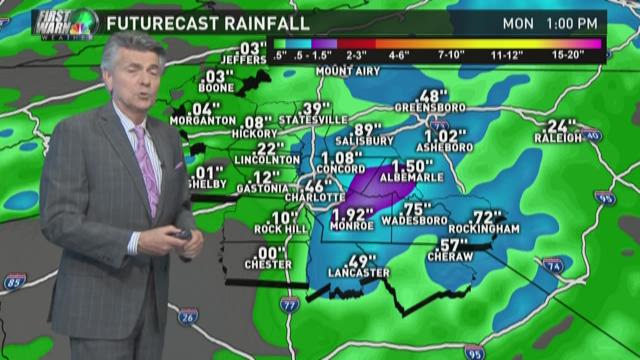 With muggy conditions to start Monday, forecaster Larry Sprinkle says any sunshine could provide conditions for a stormy afternoon and evening in Charlotte.

"It will be muggy out there, you'll certainly feel the humidity," said forecaster Larry Sprinkle. "If we get any sunshine at all, that can fuel up the atmosphere to give us some storms."

While the storm impact level is low, damaging winds are another concern that viewers should be aware of in the coming days.

Monday is expected to be cloudy with showers and possible storms with highs in the low 80s.