Interactive map shows the forecast peak for when fall leaves will change colors across the western North Carolina mountains and foothills. 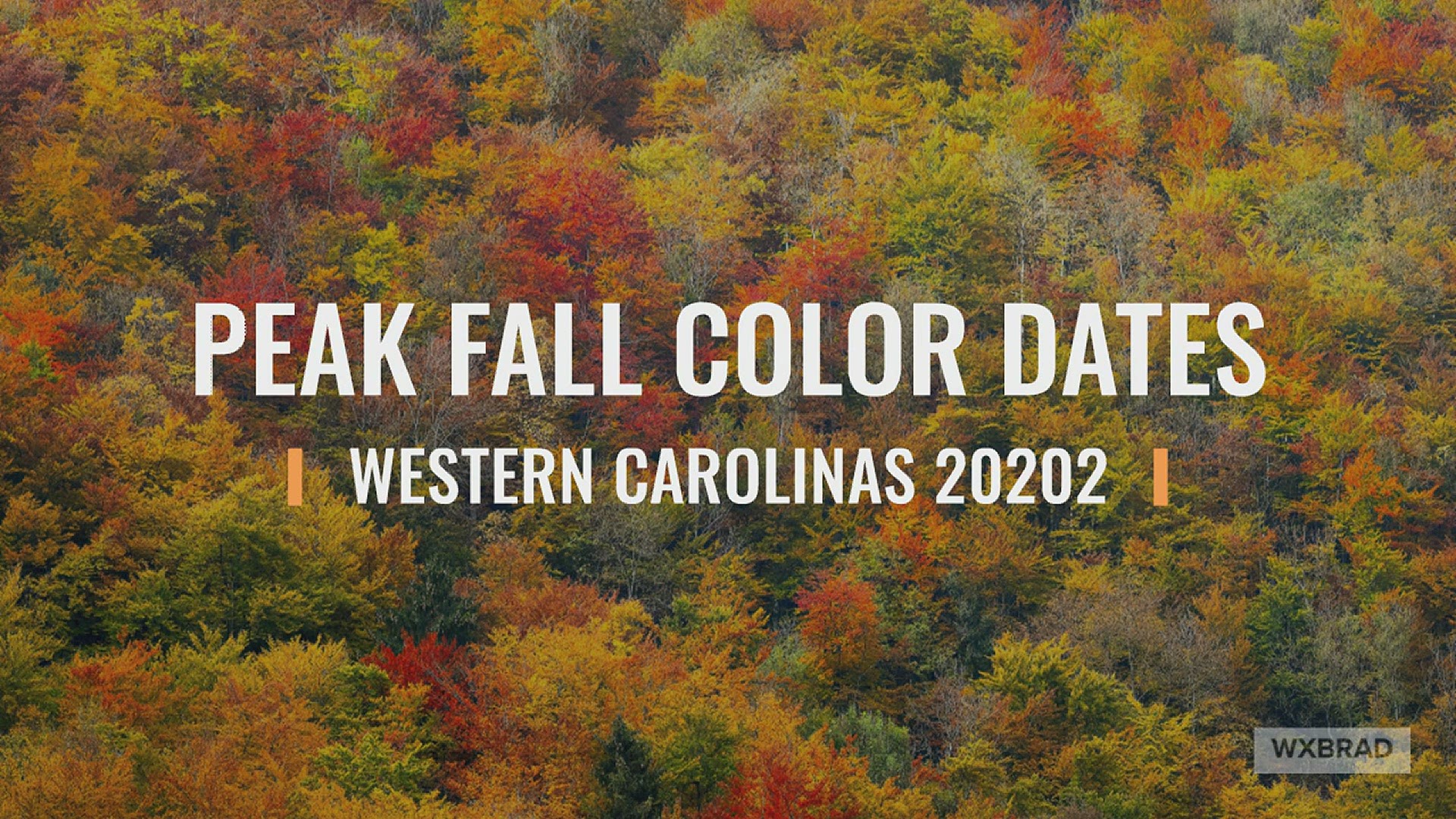 CHARLOTTE, N.C. — The cool fall air is here, and it starts to make you think about when the leaves will peak.

Unlike the past couple of years, when we had record warmth, it appears this year, we will see something closer to an average fall color peak. Though it's not as hot as years past, we are still running about 2° above average this year.

For that reason, I suspect we will run approximately one week behind compared to average.

Here is when the peak fall leaf colors are expected in North Carolina:

Use your mouse, or pinch-and-zoom with your fingers on mobile, to browse the map

An interactive map from AppalachianMaps.com shows when peak fall colors are expected across the peaks and valleys of the western North Carolina mountains and foothills.

Elevation is the key factor when determining when fall leaves will change to their peak colors.

When fall leaves will change color in the North Carolina mountains

1 / 12
WCNC / Brad Panovich / Evan Fisher
This is when the leaves are expected to change colors across western North Carolina in 2020.

The highest peaks, like Mt. Mitchell, will peak first. This applies to peaks across the area including Ashe, Watauga, and Avery counties.

Other peaks in Avery County such as Sugar Mountain, Banner Elk and Grandfather Mountain will peak in their fall colors this week. Same goes for the other peaks around Watauga County near Blowing Rock and Boone. Although the valley and Boone will peak later.

This is when the valleys, including the cities of Boone and Blowing Rock, will peak.  This is also when colors will change in upper Caldwell County. Peaks of South Mountains begin to change.

The Swannanoa Valley containing the city of Asheville will peak - but again, the mountainous peaks outside the valley will peak earlier.  Colors in the highest peaks of the Unifour Region will begin to change. Base of South Mountains changes.

This is primarily when colors in the Unifour Region, including Lenior, and Hickory, will change. Peaks of Kings Mountain and Crowders Mountain change across Lincoln, Gaston, and Cleveland counties.

Base of Kings Mountain and Crowders Mountain changes, along with the surrounding regions of the Piedmont including Gastonia and Charlotte.

How Weather Plays a Role in the change:

Temperatures combined with sun angle start affecting how quickly the colors start to show in the trees. The temperatures, though, really need up being the biggest factor.

That's why we always see the color change first in the higher elevations above 5,000' in the mountains. The nights get cooler there faster as the season progresses. Dry conditions also help, we don't want a drought, but dry autumn days tend to let the color be more vivid.

The wind is the worst enemy:

Nothing ruins the fall color quicker than a wind storm when the colors are just starting to take off. This blows all the leaves off the trees and can bring an abrupt end to the season.

We want the cold fronts but the winds they bring can be bad news. Heavy rains also aren't great for the color. They mute the color and, like the wind, can cause them to fall sooner than we'd like.

The elevation is key:

To me, the best part of the North Carolina mountains is that you can see so many elevations from different parts of the high country. The leaf color works it's way down in elevation over time so you can see the full color at the tops, moderate color in the middle, and green still in the valleys.

To me, this is the best part of seeing the color in the mountains. This also allows more than just a few weeks to have excellent viewing.

It almost doesn't matter the weather because November is the peak time for the Charlotte area. It can be as early as near Halloween to early November, but it can also be closer to Thanksgiving weekend.

So grab the camera and send us your best fall color pictures to WCNC Charlotte by using the Near Me feature on the WCNC mobile app, or by texting it to 704-329-3600.