Isaias expected to be near hurricane strength when it reaches Carolinas

Isaias became the second hurricane of the 2020 Atlantic season. 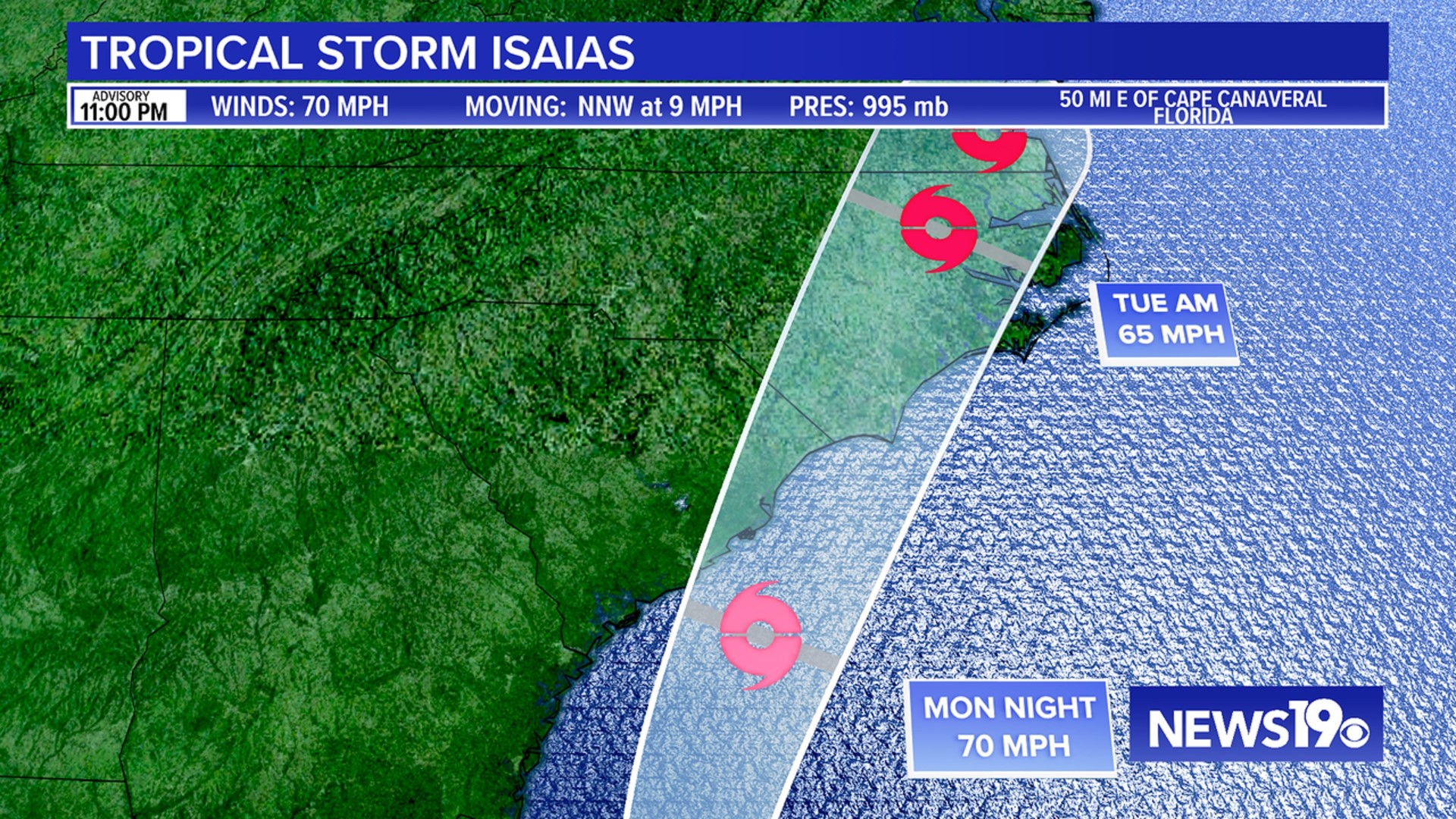 Download the WLTX App Now for the latest updates

Latest conditions on the storm:

The system continued to move towards the north-northwest at 9 MPH.

A hurricane watch is in now in effect from the border of Georgetown and Charleston Counties north to Surf City, North Carolina.

A tropical storm warning has been issued for the entire South Carolina coast.

An inland tropical storm warning has been issued for Orangeburg and Clarendon Counties.

There is also a flash flood watch in place for the Eastern Midlands, as well as portions of the Low country and through the Pee Dee.

Rainfall totals in the Eastern Midlands could be as high as 2 to 3 inches on Monday through Tuesday morning, with higher amounts closer to the coast.

The storm is moving up the coast of Floriday.

The National Hurricane Center does not expect the storm to get much stronger over the next day or so. Landfall is possible late Monday into early Tuesday between Charleston, SC and Wilmington, NC.

The graphic below shows the track from the National Hurricane Center.

There is always the chance for the track to change and the storm to shift direction as it nears the coast, but at this point, no significant changes are expected.

If we look at the so-called "spaghetti models," where each line represents a different computer model, you can see the models are in a fairly good agreement on the path of the storm.

The storm will then quickly continue it's track to the northeast and move into Canada by the end of the week.

Current Analysis: What about South Carolina?

The coastal region of South Carolina will have the highest risk for tropical storm force winds. Heavy rain will be likely for this region as well as Isaias increases the moisture.

For the Midlands, rain is increasingly expected throughout the day on Monday and into early Tuesday. The heaviest rainfall will be in the eastern portion of the area.

Any showers and storms that develop could produce locally heavy rainfall. The ground is already saturated in many areas, therefore increasing the risk of flash flooding and the reason for the flash flood watch issued.

RELATED: The next few weeks will be more active in the Tropics

As for the rest of the Atlantic, the NHC is also watching this area in the middle of Atlantic, but the odds of further development with this system is 60% over the next five days.