The Carolina coast is already beginning to feel the fury of Hurricane Florence with heavy rain and wind. North Carolina Gov. Roy Cooper made it clear: "We're on the wrong side of this thing." 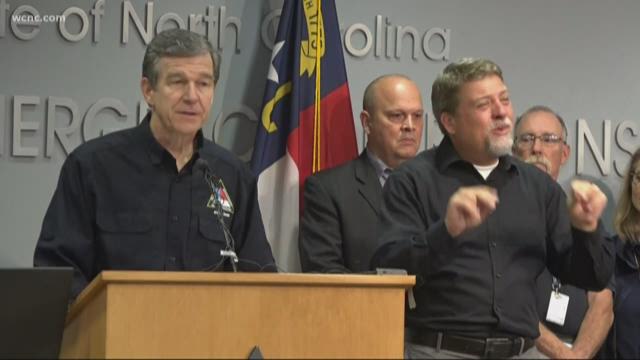 During a press briefing, North Carolina Gov. Roy Cooper, who has stressed the importance of preparation, warned, “today, the threat becomes reality.”

And while Florence was downgraded to a Category 2 hurricane, the devastation the storm is expected to bring the region hasn’t changed, particularly the storm surge on the coast.

RELATED: Answers to the 5 most asked questions about Hurricane Florence

“Catastrophic effects will be felt outside the center of the storm,” Cooper warned. “You could see storm surge as high as nine or 13 feet. That’s as high as a two-story house.”

The 600-mile wide storm will also bring nearly 30 inches of rain in some locations, with the Charlotte area expecting between 4-10 inches over the next seven days because of Florence. Cooper said over 100 shelters are open in North Carolina with 7,000 evacuees taking refuge from the powerful storm. That number is expected to grow due to flooding.

A "mega shelter" at the Lawrence Joel Veterans Memorial Coliseum in Winston-Salem has been opened, and officials are evaluating whether or not a second large-scale shelter might also be needed.

“If local officials tell you to seek higher ground, please listen,” Cooper said. “These orders are not given lightly.”

Power outages are expected primarily in the eastern part of the state, but everyone should prepare for the possibility of losing power, Cooper said.

Highway Patrol also urged drivers to take caution when on the roads, since flash floods can cause dangerous conditions without much notice. The department is expecting fallen trees, downed power lines and high waters to impact roads.

Over 2,800 National Guard troops have been deployed to assist during the storm. Cooper thanked them and their families for answering the call to duty during a natural disaster.

Hurricane Florence is currently expected to make landfall near Wilmington, North Carolina early Friday morning. Florence is forecast to remain a Category 2 hurricane at landfall before losing strength over land. However, the size of the storm and slow speed will lead to the devastating flooding forecasters expect to impact the Carolinas.