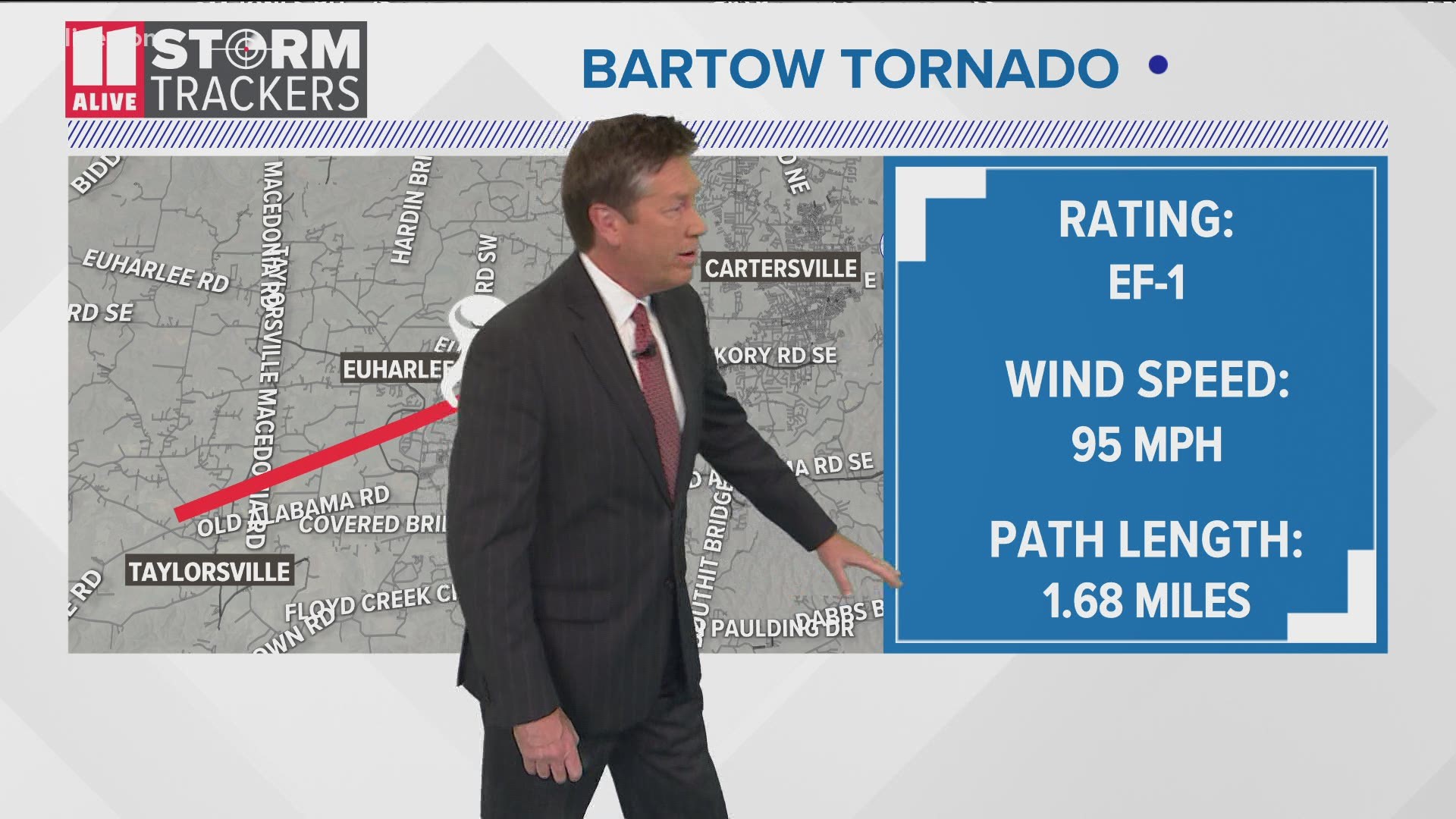 BARTOW COUNTY, Ga. — Two tornadoes touched down in Bartow county last Thursday evening during our severe weather outbreak, one of which was from a storm with a rare 'anticyclonic' rotating thunderstorm.

An EF-1 tornado that hit Bartow County last Thursday had some very rare features, according to a storm survey by the National Weather Survey.

The storm survey and study of the radar from this tornado revealed that the rotating part of the thunderstorm was moving clockwise rather than counterclockwise. This is known as an 'anticyclonic' rotation. It is very rare for this type of circulation to produce a tornado, but it did cause one briefly.

RELATED: Tornado believed to have cut 75-mile path from Alabama into Coweta County and was 1-mile wide

Keith Stellman from the National Weather Service said the tornado itself could also have been spinning in the opposite direction of most tornadoes, but "because it was weak, the pattern on the ground looks the same" as most tornadoes. Most tornadoes are spawned form storm systems that are rotating counterclockwise.

The tornado hit around 9:08 p.m. Thursday about 1 mile NW of Taylorsville in Bartow County. The survey report said that trees were uprooted near a small school along Euharlee Street and a large tree fell onto a small cabin on the eastern side of the road. The tornado moved across an open field where it flipped a large irrigation system. Numerous trees were uprooted along Euharlee Creek. The tornado lifted as it approached Old Alabama road.

The survey said "radar data suggests the storm that produced this tornado was anticyclonic, which sometimes happens in unstable environments but it is rare for such storms to produces tornadoes."

The report said no one was injured in this tornado.

Later that evening on the north side of Cartersville at 11:55 pm a tornado touched down near highway  41.  It was 200 yards wide and was on the ground for 2.85 miles ripping down trees and damaging houses. It was only on the ground for 5 minutes, but did plenty of damage in that time. It lifted before making it to I-75.

Five people were injured as this tornado tore through town just before midnight.

As for the system that hit near Cedartown in Polk County Thursday afternoon, officials believe damage from that was associated with a strong downburst, and not from a tornado.