Millions of Texans without power as ERCOT declares highest level of energy emergency, outages could last for hours

The state's electricity grid will be overwhelmed as people try to keep their homes heated. 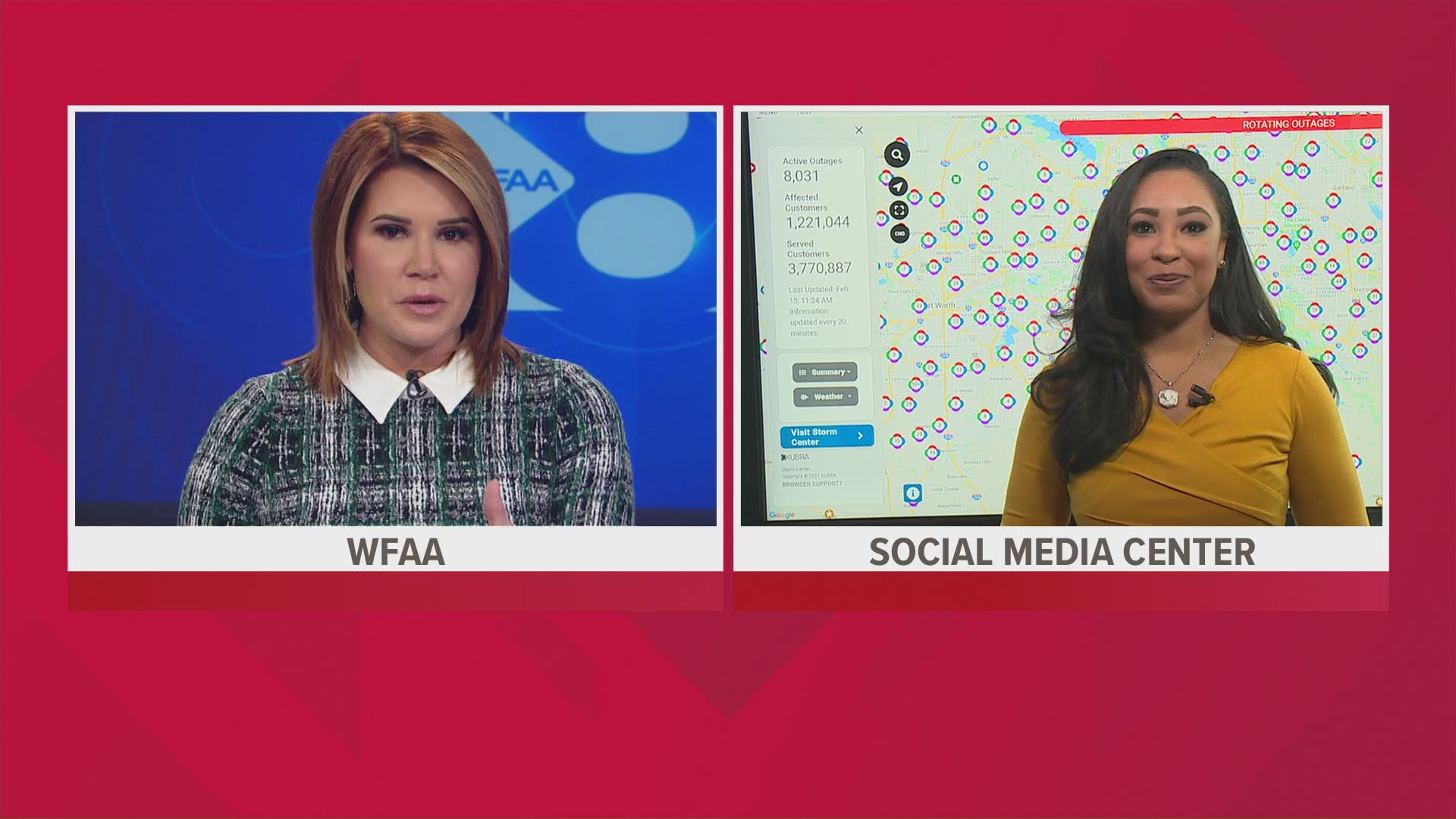 Updated at 12:45 p.m. with updates from officials on the outages.

The Electric Reliability Council of Texas, the agency that oversees the state's electric grid, has declared Texas at its highest energy emergency level. This means it has started rolling outages across the state.

The declaration is due to lower power supply and high demand due to extremely low temperatures during the winter storm sweeping the state.

Officials are asking Texans to conserve as much electricity as they can, safely and reliably, over the coming days as record-low temperatures are expected to plunge the state further into a dangerous winter storm.

Power demand is forecasted to become even greater through Tuesday.

Rotating and controlled outages are underway and started at 1:25 a.m. Monday. Residents were initially told to expect to lose power for 15 to 45 minutes during the rotating outages, but that has now been "significantly extended," Oncor officials tweeted out just after 9 a.m.

"Outages due to this electric emergency could last for hours & we ask you to be prepared."

RELATED: Power outages could continue into Tuesday, last for hours as plants battle cold to get running again

The controlled outages will last longer than typically done because of the magnitude of the situation, officials said. That's why some people are seeing their power remain off for extended periods of time.

ERCOT has said there’s no limit to how long any outage could last. It could be many hours, and it’s up to each provider to figure out where and how long the rotations are.

Officials also explained that some areas near points of critical infrastructure like hospitals will likely not experience the same kind of outages as providers work to keep the power on for those specific areas. This in turn means that they will rely more heavily on other areas for the outages.

Oncor is advising Texans that they may also experience multiple outage rotations.

"We recognize how unsettling these outages can be and strive to minimize impacts."

Officials say the rotating outages are "necessary to maintain the reliability of the system." They expect the outages to continue through Tuesday as around 2 million people were without power Monday morning. The outages could be in place until the "weather emergency ends." ERCOT officials did not define what that would look like.

Most of those that went offline were natural gas, coal, or nuclear facilities that shut down. Combined, it in total took more than 30,000 megawatts from the grid.

This is the longest period of time officials have had to run rotating outages in the state.

As of 9 a.m. Monday, more than 1.14 million Oncor customers, or about 30% of their customers, were without power across Texas. More than 6,900 outages were in effect.

These numbers are expected to fluctuate in the coming hours.

This is the first time ERCOT has reached the EEA 3 emergency level in a decade, since February 2011.

When electric reserves drop below certain thresholds, ERCOT asks regional providers like Oncor and Reliant to turn off electricity to some neighborhoods, said Dan Woodfin, senior director of system operations at ERCOT.

A message on Oncor's site said rotating outages are in effect "due to record-breaking electric demand and reduced power generation."

ERCOT warned that some customers may experience longer outages if power surges cause equipment failure during restoration.

Traffic lights and other infrastructure may be impacted by the outages, officials said, urging Texans to proceed cautiously and put safety first.

has declared an EEA 3. Energy conservation is critical. Rotating outages are underway to reduce demand on the electric system. We urge Texans to put safety first during this time. Traffic lights and other infrastructure may be temporarily without power. 01:25:40 150221

Officials said residents can help minimize power surges by turning off appliances, lights and other electricity draws, except for a single light to determine when the power comes back on.

ERCOT encouraged customers without power for longer than 45 minutes to report outages by contacting Oncor at 888-313-4747 or texting OUT to 66267 if they are registered in My Oncor Alerts.

Officials continued to ask Texans to conserve as much electricity as they can safely and reliably over the coming days as record-low temperatures are expected to plunge the state further into a dangerous winter storm.

Officials said the demand could become even greater on Tuesday.

At the same time, the grid is experiencing higher-than-normal generation outages caused by frozen wind turbines and limited natural gas supplies with individuals using it to heat their own homes.

RELATED: How to stay warm in extreme cold if your power goes out

About half of the state's wind turbine capacity (25,000-megawatts) is not currently generating power because many turbines have become frozen. But, the turbines are still producing more power than typically expected.

"Wind is putting out more than we count on for the winter season," Woodfin added.

The turbines that are operating are producing more than normal, he continued. It is uncertain whether there are plans to de-ice the turbines in parts of west and northwest Texas, ERCOT said.

With temperatures expected to drop down to 0 degrees at times through Tuesday, and below 0 with wind chill, demand on the grid is expected to remain extremely high.

RELATED: HOW TO: Keep your phone charged when you don't have power, conserve the battery now

“While Oncor’s transmission and distribution system is prepared to handle the increased load, requests for conservation are a case of supply and demand – when there may not be enough power generation to meet the high demand for electricity," said Connie Piloto, Oncor Director of Communications.

Experts explained that even taking a few small steps to reduce power consumption in your home can help your community:

Reliant is urging Texans to particularly reduce their energy usage during peak times between the hours of 6 to 10 p.m. and 5 to 9 a.m. over the next few days.

Those hours are often the times when temperatures are coldest and demand for electricity is highest, officials explained.

And officials are asking that businesses and other large consumers of electricity limit their use of electricity over the next few days to just essential production.

Texans are also urged to immediately report any downed power lines by calling 911, Oncor officials said. Crews are staged across its service areas to respond to any problems.

ERCOT has a graph showing the state electrical grid's capacity compared to demand. To see it in real-time, click here.

Texas Department of Emergency Management Chief Nim Kidd is also asking everyone to be aware of carbon monoxide poisoning as power outages begin to happen across the state. If your power does go out, Kidd says do not burn any gas appliances in your home.

Officials also want to remind people not to bring any generators inside— they should remain at least 30 feet away from your home.

Good advice for those who loose power and have generators.

Here are some additional tips that you could do if your home loses power and you do not have a generator/power source:https://t.co/wFigsIYX60 https://t.co/RnMd1aJl1T