Rainfall amounts of 1-3 inches were expected east of I-77 with up to 25 mph winds as the center of Tropical Depression Bertha moved inland. 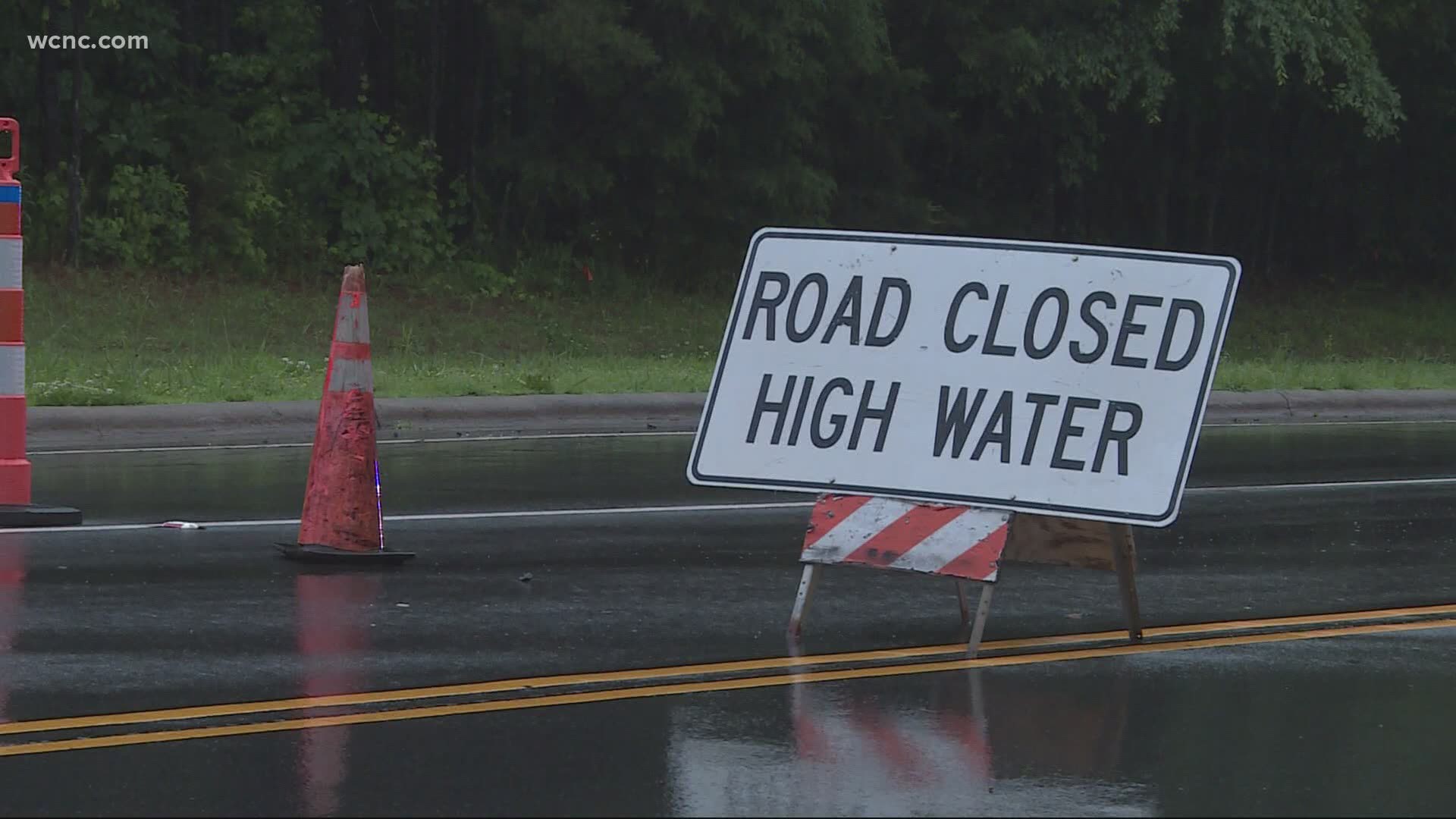 CHARLOTTE, N.C. — The worst of the rain is moving out, but flash flood warnings remain in effect for a few more hours, WCNC Chief Meteorologist Brad Panovich said.

The National Weather Service issued a Flash Flood Warning for Mecklenburg County after rainfall from Tropical Depression Bertha caused creeks across the Charlotte area to rise.

"The wind was never an issue with this," Panovich said. "This was all about rain."

That rain caused flash flooding in the Charlotte area Wednesday night. Most areas only saw about 1-2 inches of rain, but everything was already saturated — which led to some real problems for creeks and streams in the area.

McMullen Creek has risen to the point of flooding Addison Drive in Charlotte's Sherwood Forecast neighborhood. A United States Geological Survey camera at the location showed water flowing over the roadway by 6 p.m.

“With the ground saturated you don’t need as much wind to knock down trees,” John Wendel with Charlotte Mecklenburg Stormwater said.

A tree down in south Charlotte blocked a road in the Providence Plantation neighborhood Wednesday evening.

A creek gauge near the bridge showed McMullen Creek rose from just over one foot Wednesday morning to near 8 feet by Wednesday evening.

Creeks are having to manage localized rainfall in addition to rainfall upstream.

By 6 p.m., the creek was over 8 feet and approaching the banks of the creek. Hours earlier it had already flooded out the nearby greenway leading to Freedom Park.

Another USGS camera near Kings Drive showed water levels had risen into the nearby green space.

In Matthews, Sam Newell Road between Independence Point Parkway and Highway 51 was closed due to high water.

“Don’t drive through floodwaters," Wendel said. "You don’t know what’s underneath the ground may be washed away there may be power lines down there may be tree limbs down and you don’t want to get caught in that."

For the past week, rain had been falling in Charlotte and across the Carolinas. Already high waterways, combined with saturated soils, increased the likelihood of flooding Wednesday as the remnants of Tropical Storm Bertha moved through the region.

The unlikely storm formed off the coast of South Carolina only hours earlier before quickly moving onshore.

Bertha made landfall around 9:30 a.m. near Mount Pleasant, SC.

A turn toward the north at a faster forward speed is expected tonight, followed by a turn toward the north-northeast on Thursday, according to the National Hurricane Center.  On the forecast track, Bertha will move across northern South Carolina this evening and into central North Carolina and southwestern Virginia later tonight.

Maximum sustained winds have decreased to 30 mph with higher gusts. Bertha is expected to continue to weaken to a remnant low tonight.

Bertha is the second named storm of the year — it was only a named storm for 0.5 Storm Days, Panovich said and had an Accumulated Cyclone Energy value of 0.4.

Bertha was expected to produce total rain accumulation of 2 to 4 inches with isolated totals of 8 inches across eastern and central South Carolina into west central to far southeastern North Carolina and southwest Virginia.

A Flash Flood Watch was in effect through late into the evening for Mecklenburg and surrounding counties.

Rain moved into the area midday and with heavier bands in the late afternoon.

The race at Charlotte Motor Speedway was expected to start at 8 p.m.

"Almost all the guidance shows pretty heavy rain parked right on the track so I don't see this starting on time," said Chief Meteorologist Brad Panovich.  "Is there a chance we could go later into the night?  I think that's up to NASCAR."

Ultimately, the race was moved to 7 p.m. Thursday due to weather. 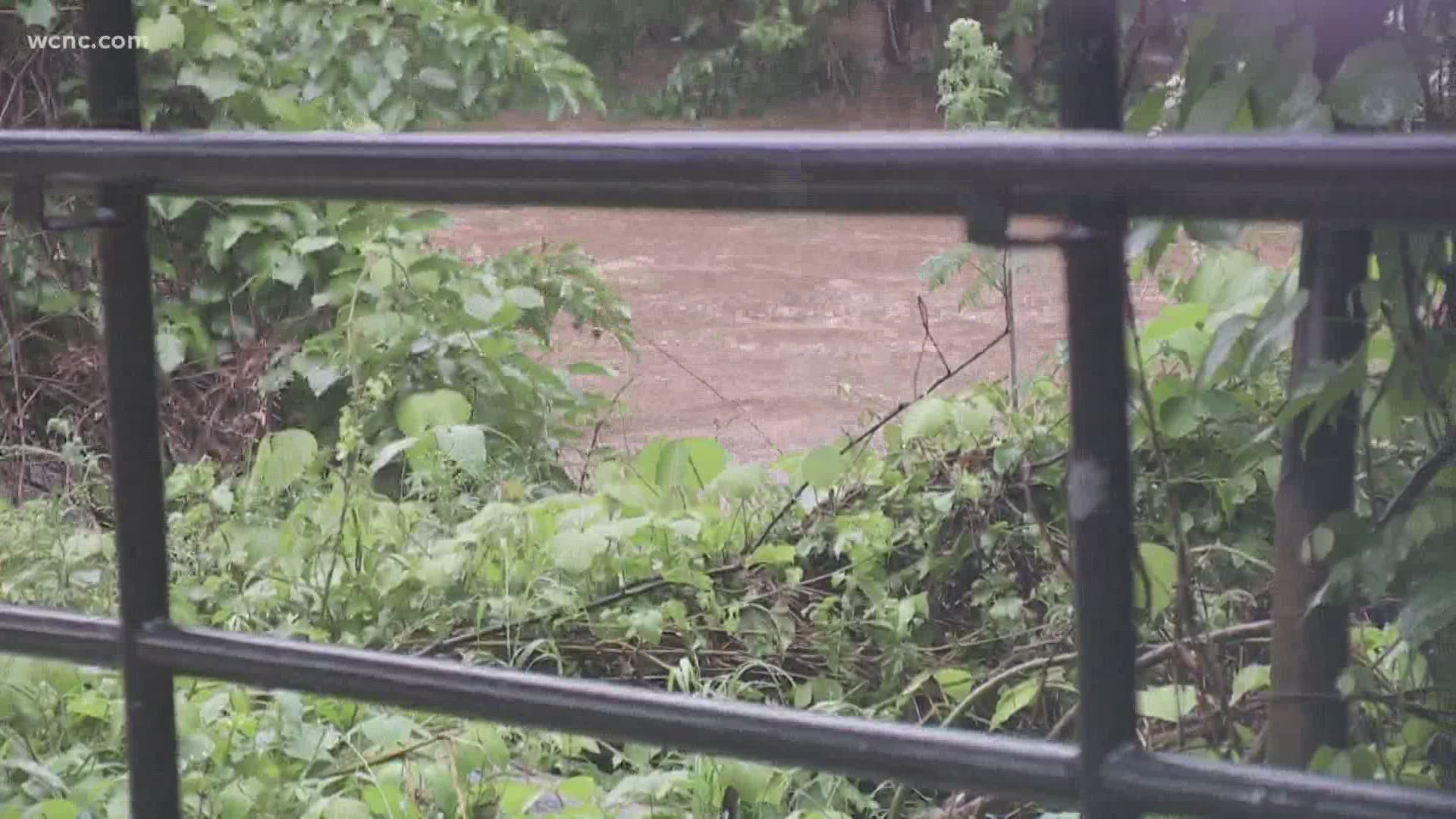 Rainfall amounts of 1-3 inches were expected east of I-77 with up to 25 mph winds as the remnants of Bertha move through, with chances decreasing after 8 p.m.

This rainfall combined with already nearly saturated soils, which caused the rapid stream rises and led to the threat of flash flooding.

A Flash Flood Watch means that conditions may develop that lead to flash flooding. Download the WCNC app to be alerted of weather watches and warnings in your area.