Weather impacts: Millions in Texas remain without power as temperatures plunge to below zero

Wind chills are expected to bottom out between a dangerous -15° and -30° Tuesday. The first-ever Wind Chill Warning for Dallas-Fort Worth is in effect until noon. 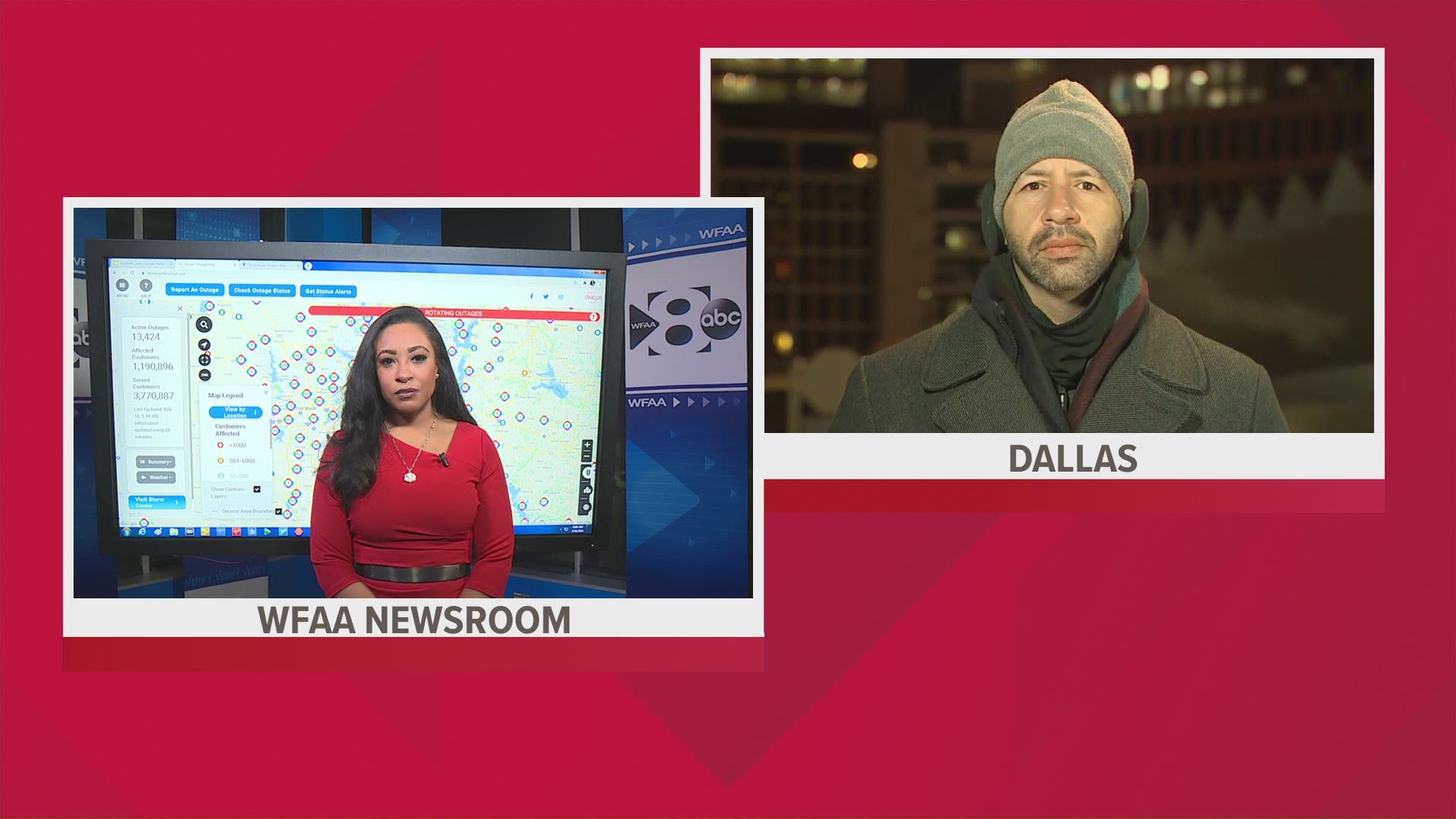 This story will be continuously updated as new information becomes available.

Slow-rolling power outages are in effect across the state of Texas as officials work to conserve as much electricity as possible during extreme cold and record demand on the grid.

Power demand is forecasted to become even greater Tuesday as temperatures plunge to dangerous lows.

Many school districts have announced closures due to the weather and outages, including Dallas and Fort Worth ISDs, which said they would be closed Tuesday and Wednesday.

RELATED: How to stay warm in extreme cold if your power goes out

Remember to download the WFAA app for the latest need-to-know weather and power updates. You can also check one of our dozens of local radars near you, the latest forecast, weather cameras and current conditions.

A new Winter Storm Warning has been issued for the next round of wintry weather, which will hit mainly Tuesday night into Wednesday in Texas. This storm will bring snow and ice.

A Wind Chill Warning is also in place through Tuesday at noon. Wind chills are expected to bottom out between -15° and -30° Tuesday morning.

The first-ever Wind Chill Warning is in effect for Dallas-Fort Worth because of these dangerously cold conditions. Wind chills this extreme could become life-threatening to people and animals outside without a shelter.

Officials are urging Texans to conserve electricity as the grid faces unprecedented demand from the extreme cold and a lower-than-normal electrical generation due to offline coal and natural gas facilities, as well as frozen turbines.

The Texas Speaker of the House has called for a hearing on the statewide power outages.

Speaker Dade Phelan, R-Beaumont, asked the House State Affairs and Energy Resources Committees to hold a joint hearing to review what led to the massive power supply drop-off that has caused all the outages statewide.

“The extreme winter weather Texans experienced this week caused the lights to go off across the Lone Star State,” Phelan said in a news release. “I’m asking these two vital committees to convene a joint hearing on Feb. 25 for the express purpose of helping Texans understand what went wrong and how we can prevent these conditions from happening again."

Phelan said he wants to know what steps regulators and grid operators need to take.

“The statewide blackouts raise questions about the reliability of our electric grid and its ability to withstand extreme weather events in the future," Paddie added.

Hundreds of thousands of homes in Haslet and north Fort Worth are under a boil order after power outages at water utility facilities and loss of water pressure on Monday. Many, if not all of them, have lost water entirely.

Customers impacted by the boil order may lose water for an extended period of time, officials warned.

The boil order is expected to last until at least late Wednesday, but likely longer. Once water service is back, it will take city officials 24 hours to test and get results back.

It's also possible other parts of Fort Worth could experience the same issue.

Customers should boil their water for at least two minutes prior to drinking it, washing with it, or brushing their teeth, according to officials. Water should be boiled vigorously and then cooled before it is consumed.

RELATED: 212,000 homes in Fort Worth now under a boil order after water utility widely loses power

There have already been thousands of flights canceled in the Dallas-Fort Worth area as the area deals with the wintry weather. Officials are urging any passengers to confirm their flight status before departing for the airport.

Check for delays and cancellations:

Check a full list of all delays and closures here.

Many vaccine clinics across North Texas are closing or rescheduling due to the weather. Below are some that have announced closures.

Bell Fort Worth area facilities will stay closed on Tuesday.

TRE announced it will be suspending service from 10 p.m. Monday through the beginning of Thursday due to winter weather conditions in North Texas.

Officials said for any TRE passengers connecting to DART services, rail operations are also suspended until the beginning of Thursday.

TRE said DART shuttle buses will be available for passengers. These bus routes can be viewed online under the "Operating Scenario 2" section.

People can register for TRE alerts or DART alerts for the latest updates and service changes.

The transit service is moving to Operating Scenario 2, which means all rail operations will be suspended and DART bus routes will operate on normal Saturday schedules for the first few days of the week, with limited service scheduled on routes 63 and 362.

The Dallas Streetcar will not operate during this time, but a shuttle bus will be available between EBJ Union Station and the Bishop Arts District, making all stops. The transit service is also now providing 14 additional shuttle bus routes, which can be viewed here.

Passengers with questions can call customer service representatives at the following phone numbers:

All Dallas County offices and courts will be closed Tuesday due to inclement weather.

Denton County is closing all facilities on Tuesday. First responders will remain on duty and inclement weather stations will be open.

In the City of DeSoto, City Hall, the public library, and the recreation center will all be closed.

Non-essential city facilities will be closed Tuesday. Trash service is also canceled through Wednesday and is projected to resume service Thursday.

All Tarrant County governmental buildings will be closed on Wednesday.

Drivers can find information on road conditions throughout the state on DriveTexas.org or by calling 800-452-9292.