Tropical Storm Zeta's powerful winds took down trees all over the Charlotte area, leaving nearly 500,000 people without power during the storm. 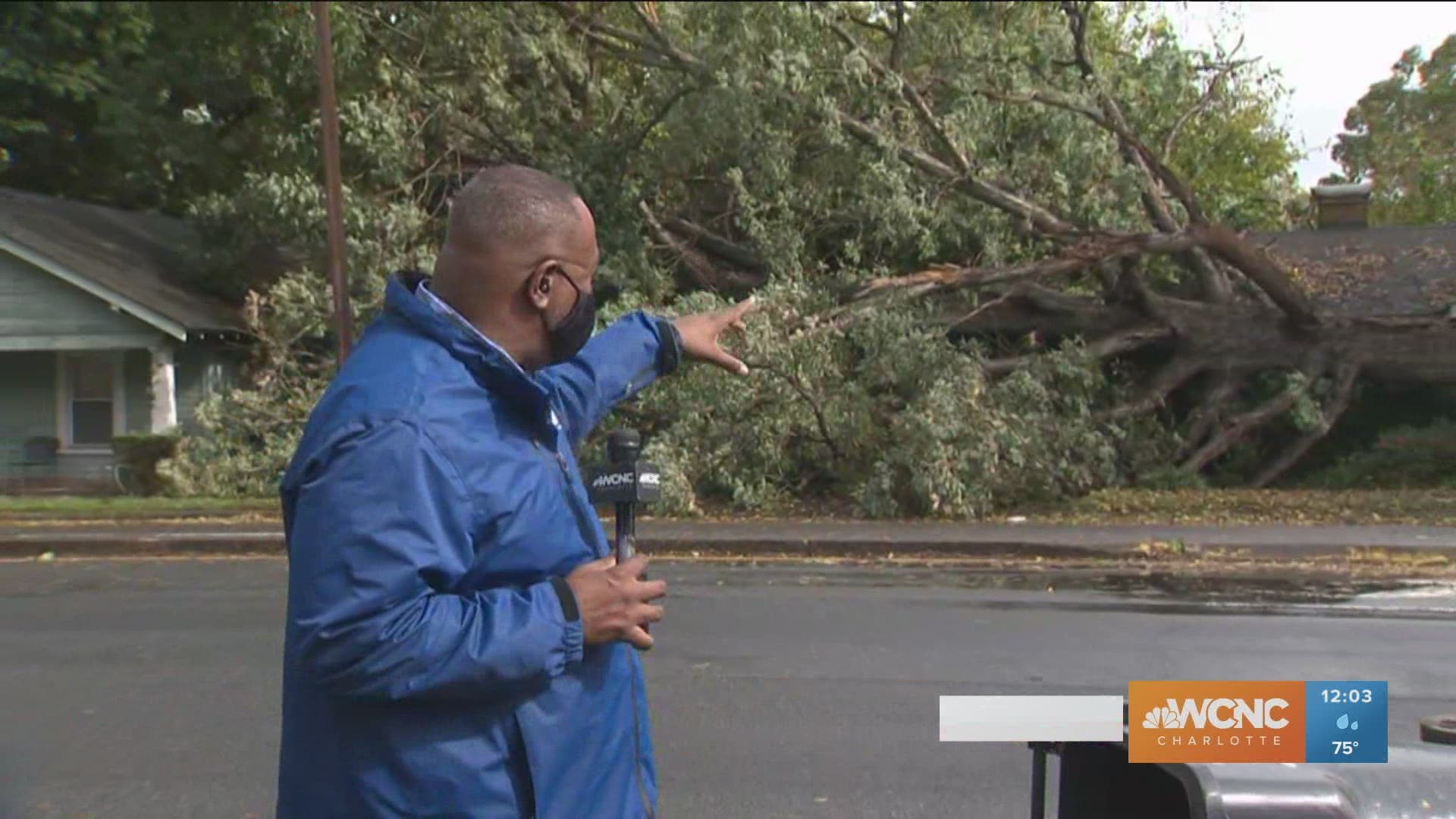 CHARLOTTE, N.C. — Nearly 500,000 people are without power in the Charlotte area and across the Carolinas as Tropical Storm Zeta brought high winds and heavy rain to the region Thursday.

While most of the Charlotte metro experienced gusty winds, the North Carolina mountains and foothills received heavy rain and localized flooding. The threat of isolated tornadoes remains for areas east of Charlotte as Zeta continues to track toward the Atlantic Ocean.

According to Duke Energy, over 476,000 customers lost electricity during the storm, which took down trees all over the Charlotte area. Over 340,000 of those outages are in North Carolina, and outages have been reported all across both North Carolina and South Carolina.

A State of Emergency was issued in Catawba County due to the storm's impact on the area. A Flash Flood Warning is in effect for Alleghany, Ashe and Watauga counties until 2:45 p.m.

Zeta leaves damage behind in Carolinas

Nearly three inches of rain was recorded around Morganton in Burke County, with almost two inches of rain being reported in Lenoir and Caldwell County. Charlotte's rain totals were much lower with the biggest impact of the storm being high winds and damaging gusts.

Trees made a mess in the front yards of several homes, even falling on a car.

On Belvedere Avenue in Plaza Midwood, tree removal crews were already at work, trying to clear this from blocking the street.

"I heard a boom,” said Michael Qubein, who lives in the house where the tree fell from. “The dogs went crazy, and I came outside and saw all this.”

Luckily, no one was hurt and no major damage.

"Grateful for my friends, my family, neighbors, everyone's safe, and we're all good,” said Qubein.On East Sugar Creek Road, a tree blocked two lanes of traffic, falling from the front yard of a home on McMillan Street and stretching across the road.

Crews marked off one lane of West Sugar Creek at Hondures Drive where a tree snapped and pulled down the power lines.On Sherwood Avenue in Myers Park, neighbors walking by couldn't help but notice the massive tree that uprooted.

A large tree fell across the intersection of Sherwood Avenue and Beverly Drive. Chunks of the sidewalk were pulled up, and there appears to be some damage to a nearby home. pic.twitter.com/8QUxU4VXZP

People who live in Myers Park are used to seeing sights like this when storms pass through, but with so many tall trees around, it has neighbors on alert anytime windy weather blows through Charlotte.

"It's very frightening,” Huffman added. “It really is with all these great big oak trees, and none of them seem to be damaged when they fall."

"The main threat for flash flooding would be anywhere from Burke County, Caldwell County, all the way up to Ashe, Avery, and Watauga County," said First Warn's Larry Sprinkle.

School districts across the area responded to the severe weather threat with choices to move to virtual learning for Thursday, with some closures as well.

Thank goodness John, our mail carrier, is okay. He was leaning out of his truck delivering mail when a tree fell on him. This is in the Eastbrook neighborhood in Statesville NC. @wxbrad @IredellFirewire @wcnc @WBTV_News @wsoctv pic.twitter.com/pY9kIDvg7B

As of 6 a.m. Thursday, Zeta has left nearly 500,000 people in metro Atlanta without power as the storm moves northeast toward the Carolinas.

As gusty winds arrived later Thursday morning, additional outages were being reported in Charlotte, along the I-77 corridor, and in the western North Carolina mountains and foothills.

Zeta made landfall along the Louisiana coast south of New Orleans Wednesday as a very strong category 2. Within 110 mph sustained winds at landfall, Zeta needed only one mph stronger winds to be formally classified as a 'major hurricane' as a category 3.

Wind impacts from Zeta in the Carolinas

Morganton, Hickory, Lincolnton, Statesville, and Gastonia could be among the areas that see 30 to 40 mph sustained winds with gusts up to 50 mph.

Higher, mountain elevations near Boone and Blowing Rock could see sustained winds of 25 - 35 mph with gusts up to 45 mph.

South of Interstate 85, including the City of Charlotte, Rock Hill, and Fort Mill, could see winds of 30 mph with gusts up to 40 mph.

As a result, power outages and down trees will occur as Zeta impacts the region a Thursday.

Strong winds are expected to diminish throughout the afternoon as the center of Zeta's circulation moves east of Interstate 77.

5pm Update: #Zeta is making landfall right now with 110 mph winds. The forward speed is up to 24 mph, and getting faster. That brings tropical-storm-force winds into the western Carolinas tomorrow morning. #cltwx #ncwx #scwx #wcnc pic.twitter.com/S1mtupCz1A

Rain and flooding impacts from Zeta in the Carolinas

Zeta is forecast to bring 3 - 4 inches of rain to the higher elevations in the North Carolina mountains, including in Avery, Ashe, and Watauga counties. Rainfall totals decrease with elevation with 2 to 3 inches expected near Lenoir. Across the foothills and mountains, the National Weather Service has issued a Flash Flood Watch, which means flash flooding could occur over the next day.

In other parts of the foothills and piedmont, 1.5 to 2 inches of rain could be observed in Hickory, and upwards of one inch in Charlotte.

Although a tropical storm watch has not been issued for counties such as Mecklenburg, Avery, Ashe and Watauga, residents should monitor changing weather conditions over the next few days.

Rainfall amounts and max wind gusts from the remnants of #Zeta and the cold front tonight and Thursday. #cltwx #ncwx #scwx pic.twitter.com/jHu7avUYBX

Tornado impact from Zeta in the Carolinas

And while Zeta's strongest winds and highest rainfall rates are expected in the higher elevations of the Carolinas west of Interstate 77, there is a low risk potential for severe weather along the Interstate 77 and Instate 85 corridors Thursday.

Across the Southeast and Carolinas, residents are encouraged to charge batteries, phones, and radios ahead of Zeta. Scattered power outages are possible Thursday. 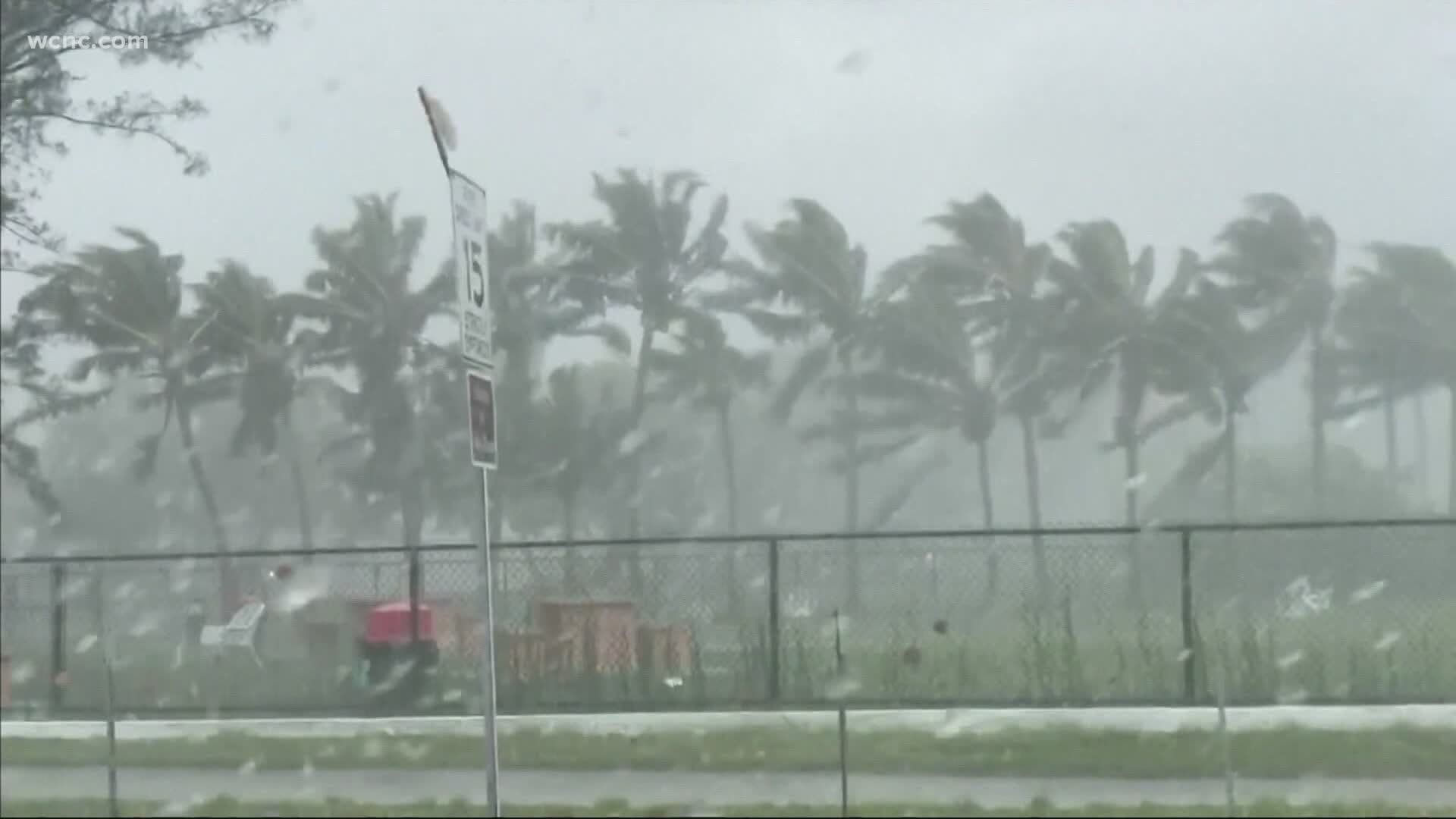 Arborists say there are two key factors homeowners should consider preparing for the high winds—checking the ground saturation and making sure large you tree canopies have enough space to allow air to move through and prevent a strain on the tree root.

“It may present as a fully healthy tree, fully leafed out but it’s that full weight that can aid in that tree uprooting,” ISA certified arborist Joshua Milbourne said.

With the potential for falling trees, Duke Energy says it's also prepared for any possible power outages too.

“We have more than 2500 crews here in the Carolina that are here to respond to outages and emergencies if they occur,” Duke Energy spokesperson Meghan Miles said.

In addition, there are nearly 300 workers on standby from Duke’s Midwest territories as well if more help is needed. As for a potential flooding threat, Duke Energy has also lowered the lake level to accommodate the extra rainfall.

WCNC Charlotte encourages you to have multiple ways to receive severe weather notifications including our app, a NOAA weather radio, and access to television and radio broadcasts.