Pork belly and Philly cheese steaks on the grill 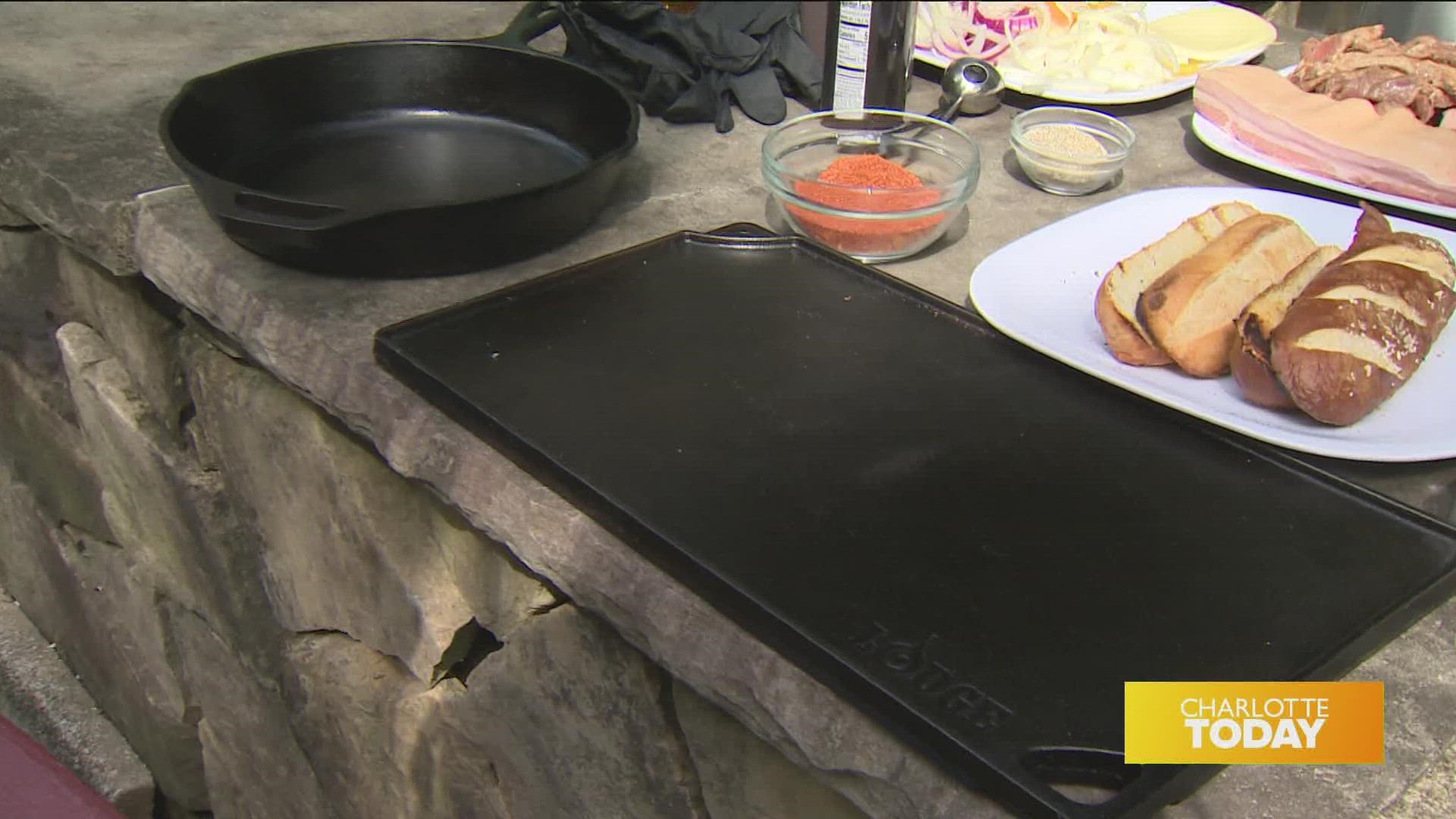 CHARLOTTE, N.C. — Today we're putting a spin on an old favorite and a new spin that you'll go "hog wild" over.  The grill master Ernie Adler is cooking up “Pig Candy” and Cheese steaks.

First up is a great appetizer featuring pork belly. We’ve all had nature’s perfect food with breakfast favorite; bacon. This delicious meat comes from what is called pork belly but you can also do a lot of other things than just make bacon with it. Today we’re making what I affectionately call “pig candy”. Head to your local grocery store and pick up a nice stab of pork belly. It’s usually sold in the fresh meat/butcher section either packages or cut to order. A slab will typically be about 12 x 12. Prep it by first inspecting, and trimming off the one hard side with a filet knife and cut into long strips about 2 inches wide. Then generously rub your favorite seasoning on both sides and refrigerate overnight. I use the same rub that I use on my pulled pork. When ready to cook it up pre-heat your grill or smoker to 275 degrees and add your favorite wood for smoke. While the grill is heating up let your slab come up to room temperature. If using a grill or smoker you will use indirect heat so the fat drippings don’t burn. Put the slab on and cook until it reaches 175 degrees, turning once when halfway when it gets to about 85 degrees. At 175 then start basting it with your favorite sweet BBQ sauce and re-baste every 10 minutes until the thickest part reaches 200 degrees. Take off and let rest before slicing into bit sized pieces. You can serve with just toothpicks and some BBQ sauce for dipping or on top of a toasted baguette slice.

Next up we’ll put a new spin on an old favorite, Philly cheese steak. Many people use thinly cut strips of sirloin for these sandwiches, but the better way is to use rib eye or even a strip. Sirloin is a tougher cut and you’ll have to cut even thinner than the others so it’s not chewy, but the others are much tastier cuts and have better marbling. Buy some thinly cut rib eye steaks, and  cut into thin strips. Add in Kosher salt, pepper, garlic and onion powder, and a dash of Worcestershire sauce. Toss the meat and let refrigerate overnight. You’ll also need to cut some peppers and onions into thin strips, and instead of the traditional American cheese or cheese whiz we will use smoked provolone. For the bread use a salted pretzel roll or a traditional club roll. When ready to cook heat your grill to 450 degrees, put a cast iron pan or griddle on and heat it up. The pan is hot enough when you add a few drops of water and it immediately sizzles. Add some oil to the pan and quickly stir fry the meat for a minute or two until done, then set the meat aside. Then add some additional oil and add in the peppers and onions, sauté for two minutes, then add the meat back in and toss together for a minute. Top with the provolone and let it melt (putting foil on top will help). Toast the rolls by brushing with oil and placing over direct heat. When the cheese is melted transfer to the rolls, cut in half, and chow down. You can also top with some BBQ sauce. For more information visit Erniesbbq.com.