The incident happened July 13 and the horse, named Beatrice, was three days old. 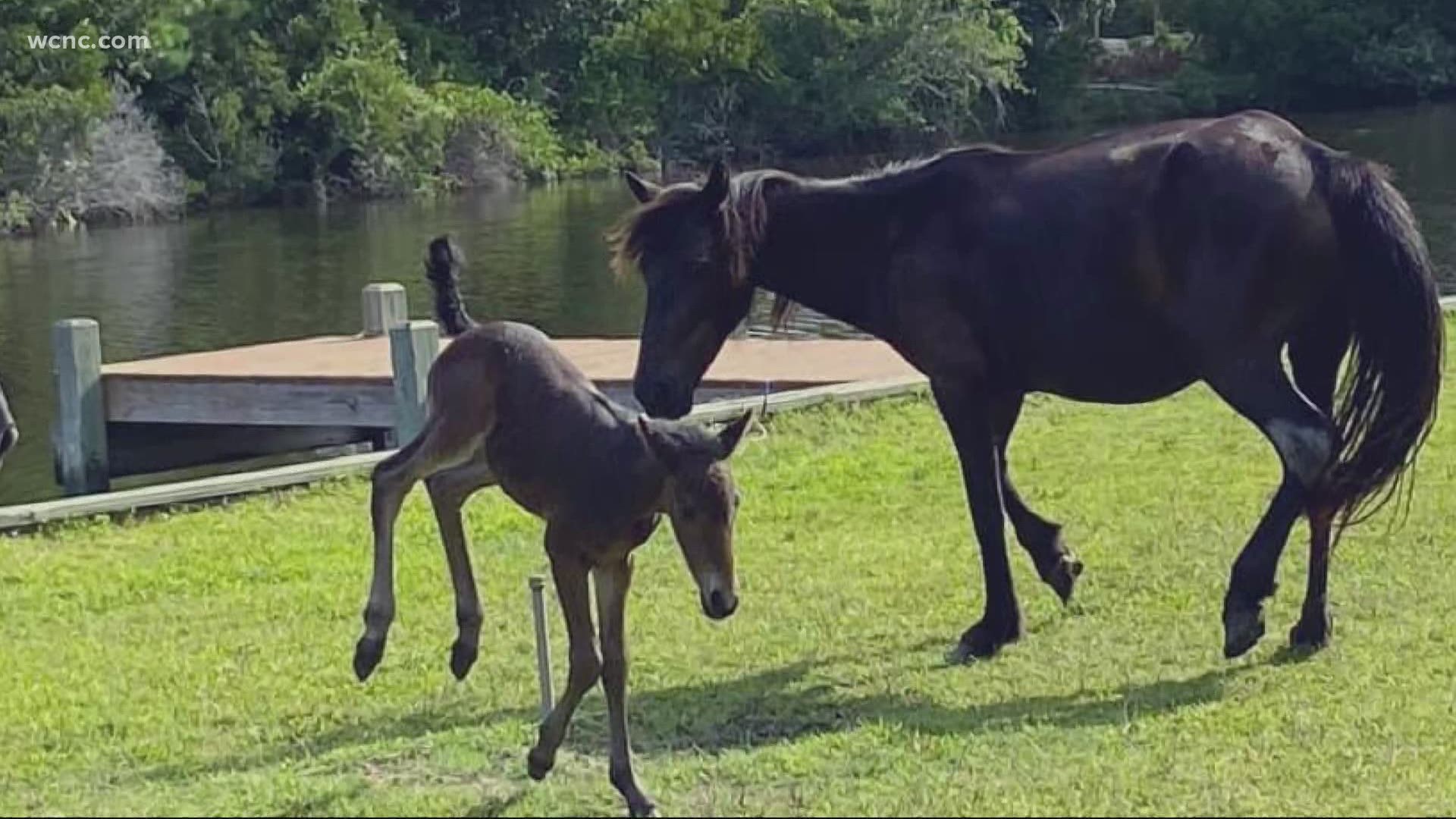 CAROVA BEACH, N.C. — It will be a week Owen Carson and the rest of his family won't ever forget.

Carson, his brother-in-law, Jeff Kipp, and his father-in-law, George Kipp, decided to soak in the sun and enjoy the water on Tuesday, July 13, with a fishing trip in Carova. More than 20 people, including the trio, are in the Outer Banks this week celebrating George and his wife, Mary, having their 50th wedding anniversary.

The fishing trip took an unexpected turn when the fishermen discovered a foal struggling at the seawall of a canal.

After watching the horse, and seeing it was unable to get out of water, Carson and his family knew it was time to step in and help.

"We all just kind of decided, 'you know what, forget about penalties or anything like that, we can deal with that later. We're just going to save this horse because its not going to make it if we don't,'" Carson told WCNC by Zoom Thursday night.

After wading through the water, Carson was able to gently guide the horse along the seawall to a boat slip. It was at that point Carson said they called the rescue crew and officials arrived in 10 minutes to help with the horse.

Carson was able to carry the exhausted animal up the boat ramp and onto land, but it was then the foal decided to get back into the water.

"So I jumped back into the water and got it again," Carson said with a smile. "I brought it back up to the grass and just gave it a little nudge. It walked up to the mom and immediately started nursing. It was a wild experience."

The experience Carson went through has been documented on social media and highlighted by the Corolla Wild Horse Fund. The foal rescued by the men is actually named Beatrice and the agency shared a post to its Facebook page, highlighting the "exciting first few days of life" for the horse.

CWHF also shared the moments of the rescue and credited the men for their work. The Facebook post has been shared nearly 800 times and has been interacted with by more than 5,000 people.

Welcome foal #7! This filly was born on Saturday, July 10. Her name is Beatrice. Beatrice has had an exciting first...

"I never expected publicity out of this," Carson said. "I was just sharing a really intense and wild moment from my life with my family and friends. These horses mean a lot to the people who live along the beach, that's obvious. I mean, all three of us in the boat are animal lovers. We're all long time pet owners. We thought we couldn't just be passersby. We needed to do something."

RELATED: How a calendar hopes to help protect the animals in the Smokies

Carson joked that after the incident, the men went back to what they intended to do and were able to catch some fish.

Animals and the outdoors is something that means a lot to Carson. He works at Equinox Environmental, based out of Asheville, and has been a botanist there for 10 years. Carson said the company also works with wildlife, does conservation planning, sustainable design and ecological restoration.

Overall, the good Samaritan also said he hopes this experience lets other people know they can step in when they need to for animals.

RELATED: More than 40 ducks and geese removed from Statesville park after 'extreme cases' of animal cruelty

"I feel like I have an obligation and other humans should feel an obligation and responsibility to be good stewards for the environment," he said. "When you see a wild animal struggling and you can help it out, do it... if you can do it safely, or call someone to help. We as human beings should care about all living things and if we have the opportunity to step in and help, we should."

Carson also thanked the crew at CWHF and encouraged people to support them if you can.

You can learn more on how to help the agency by clicking here.