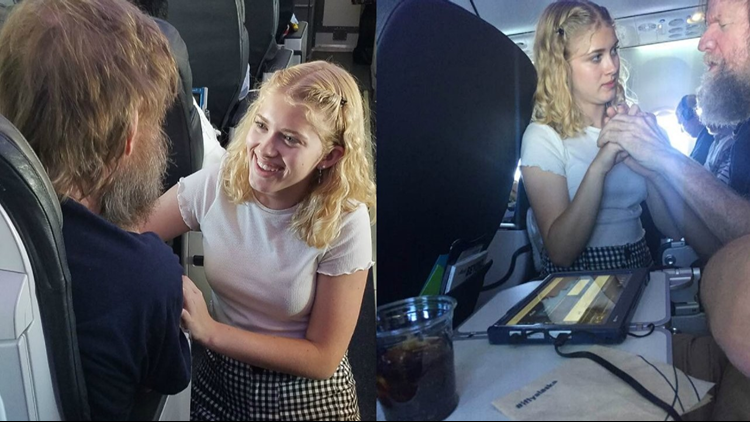 "She'll probably kill me for posting this, but - Proud of my girl."

A proud mother took to her Facebook to brag about her teenage daughter, she never expected her post to spread the way it did -- reaching thousands of people nationwide.

Clara Daly and her mother were flying home from Boston on an Alaskan Airlines flight when they spotted a man unable to communicate with his flight attendants. This man was both deaf and blind.

Staff on the plane made an announcement asking if anyone on the flight knew American sign language, Clara did.

Without hesitation, her mother said she offered to help the man, Timothy.

"Several times he requested her assistance throughout the flight. Toward the end of the flight he asked for her again, and this time he just wanted to talk," Clara's mom said.

So for the remainder of the flight, the young girl kneeled in front of Timothy. Using only their hands, the two chatted.

"He asked her lots of questions, and she signed-spelled the answers into his hand. The flight attendants and the passengers around him were all taken by Clara," Jane said.

Several other passengers also took to Facebook to document the experience:

"That's when this lovely young woman came into the picture. 15 years old, she learned ASL because she had dyslexia and it was the easiest foreign language for her to learn. For the rest of the flight she attended to Tim and made sure his needs were met."