Every box from Lorenzo's Pizzeria will include a photo of a dog, cat or bird that is up for adoption in Charlotte. 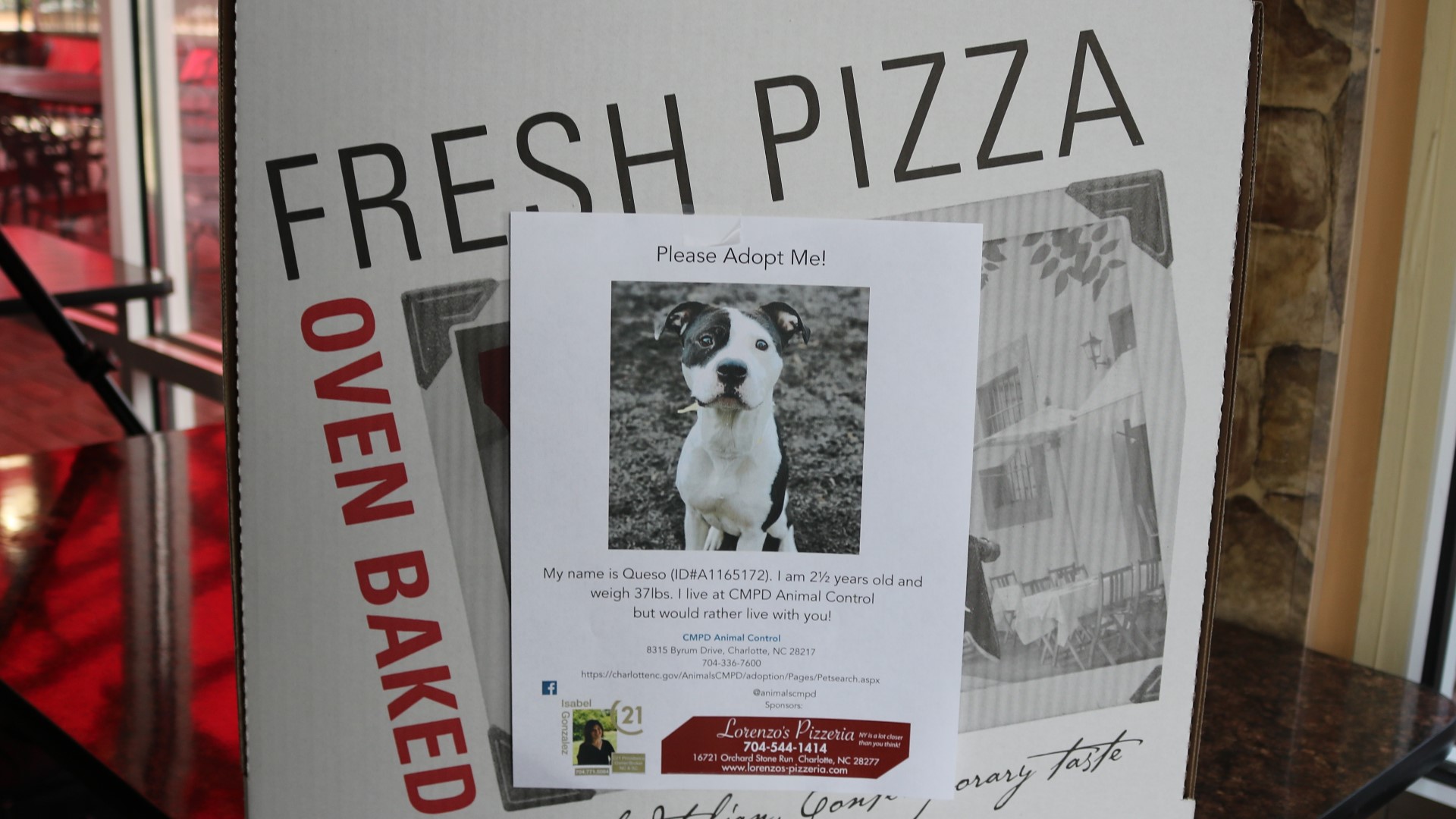 CHARLOTTE, N.C. — A popular family-owned and operated pizzeria in Charlotte, North Carolina is taking a unique step in helping rescue dogs in their area.

Lorenzo's Pizzeria is putting photos of adoptable dogs on their pizza boxes in the hopes that one of their customers will adopt the pet.

Denise Simonelli, the owner of the Lorenzo's, said she noticed how many pets in Charlotte need a loving home.

"I'm on social media and I see all of these animals that have no place to go," Simonelli said. "And it's one right after the other."

Simonelli said she was sitting down with her husband one night and said to him "there has to be something that we can do."

The two quickly realized their pizza shop would be the perfect platform to help raise awareness for the adoptable animals in Charlotte.

"We give out 500 boxes over the weekend," Simonelli said to her husband. "Why don't we start putting flyers with animals that need homes and put them on our pizza boxes,"

And they did just that.

Lorenzo's Pizzeria has partnered with several rescue organizations in the city to help get these animals adopted. For now, there are only rescue dogs on the boxes, but Simonelli said they're not stopping there.

"This is for all animals," Simonelli said. "Cats, dogs, kittens, horses."

Simonelli said the rescue organizations were eager to partner with them.

"They gave us those animals that were in great dire need of getting home right away," Simonelli said. "So starting off we have about six dogs right now, but we'll have plenty of animals coming forward."

Lorenzo's Pizzeria has just started putting the flyers of rescue dogs on their pizza boxes but said she's already seeing an amazing outpouring of support from the community.

"The community is loving it," Simonelli said. "As I said, the platform that we have is huge, we like to help out the community and this was just another way to fill my heart."

Lorenzo's Pizzeria said they are talking with Carolina Waterfowl Rescue, and are hoping to get their animals on their pizza boxes as well.

"Carolina Waterfowl Rescue contacted us asking us if we would like to feature their animals," Simonelli said. "And I said absolutely. I can't tell you how many times I rescued birds and turtles."

Lorenzo's Pizzeria will give a $25 gift card to anyone who adopts a pet featured on their boxes.

If you're interested in adopting the dogs on the pizza boxes at Lorenzo's Pizzeria you can visit the CMPD Animal Care and Control.

To learn more about Lorenzo's Pizzeria and their program click here.