"They finished their first song," Christian said, "and I asked them 'how long have you been doing this?' And that's when I learned they were complete strangers." 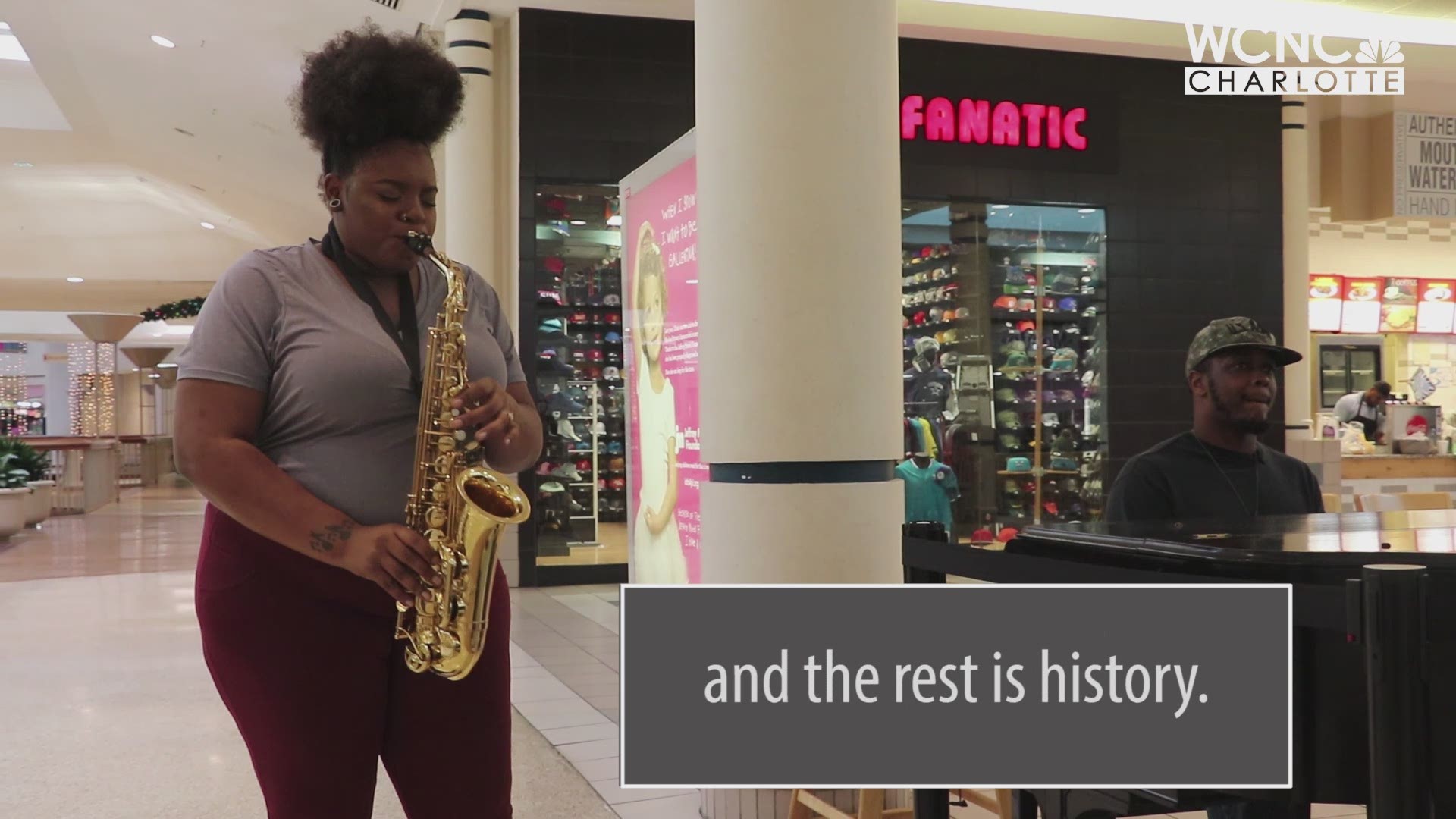 GASTONIA, N.C. — A single spontaneous moment at the Gastonia Mall has created a strong bond between three complete strangers -- and a moment, captured on video, that will last forever.

Cassandra Christian was at the Eastridge Mall in Gaston County last week and was just doing a little shopping.

In fact, she said she had a pretty rough week and was just there for a little retail therapy.

"This was a rough week to begin with," Christian said. "I had come to the mall to kind of get some retail therapy. And coming to the mall everything was just so noisy -- I heard the beautiful music and it made me stop and take it all in."

Christian said she spotted two people playing the piano and the saxophone to Adele's "Someone Like You" in the middle of the food court and was immediately blown away by their raw talent.

"They finished their first song," Christian said, "and I asked them 'how long have you been doing this?' And that's when I learned they were complete strangers."

Christian said she took out her cell phone and began recording the two. She later posted the video to her Facebook page.

"I knew it was magical and it was a great moment that needed to be shared," Christian said.

After chatting with Reaves and Starr -- Christian learned their backstory.

The saxophone player, Reaves, is an employee at Bath and Body Works and brings her instrument to work with her so she can play for tips before and after her shift.

"I play in the mall sometimes, before and after work," Reaves said. "I try to make a little extra tip money because it helps... a lot."

Christian learned that Starr, the pianist, was just at the mall to go to the DMV located inside the store. While in line at the food court Starr spotted the piano and sat down.

"I saw Ms. Symphony sitting here at the piano -- she had a saxophone and we started talking and one thing led to another and we started playing," Starr said.

Starr said the moment the two of them began playing together was almost magical.

"It was a feeling you can't really explain -- two sources that come together perfectly and we just made that sound and it was just perfect," Starr said.

Reaves and Starr never could have imagined their spontaneous moment together would reach so many people online.

"I think that things happen for a reason and the universe lined up the stars and the planets and everything just lined up at that moment," Starr said.

Christian now hopes people take the time to enjoy the moments around them during this busy holiday season.

"Take the time to listen," Christian said. "Because it really was an enjoyable moment to know that this was completely unrehearsed, it was just a moment of chance that it happened."