Breweries, salons, restaurants and barbershops in North Carolina will open their doors for the first time in eight weeks as part of Governor Cooper's reopening plan. 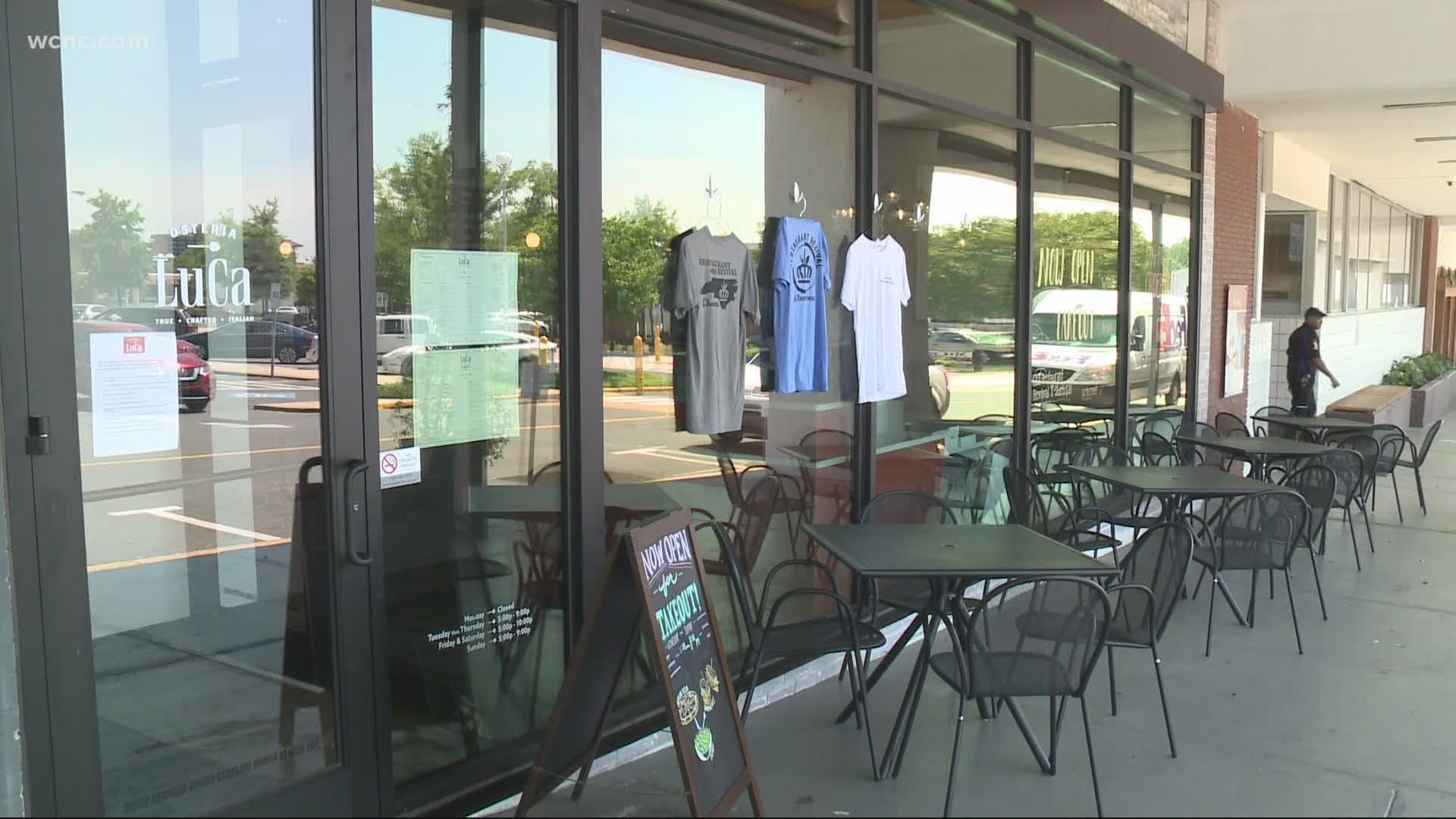 CHARLOTTE, N.C. — North Carolina’s Stay at Home Order lifted Friday, as the state now moves into a ‘Safer at Home’ recommendation, considered to be Phase 2 of the Governor’s plan to reopen businesses.

Many of those businesses -- from restaurants to hair salons to breweries -- reopened their doors Friday for the first time in 8 weeks. But what will eating out or getting your hair done look and feel like under the CDC’s safety guidelines? WCNC Charlotte spent the day finding out.

“This door is going to be propped open,” describes Ken Martino, who owns Italian restaurant, Osteria Lucca, in the Park Road Shopping Center. Martino says when customers arrive, they won’t need to touch the door.

He’s also installed a clear partition to separate customers from the staff at the host stand, set-up a number of hand sanitizing stations around the restaurant, and says all menus will be disposable, and all staff will be wearing masks.

“We’re just excited to serve people again to have people come in and create some positive energy in the space and really provide some good food, some good service,” he says.

Martino says customers will also have the option to pay their bill without having to touch it or pass their credit card to servers, using new technology, “Which allows the guest to take a picture of the check and then make the payment on their own phone,” he says.

RELATED: What will reopen in North Carolina under Phase 2?

Martino says the restaurant plans to reopen Saturday evening and already has a significant number of reservations.

Changes are also brewing at Suffolk Punch in Charlotte’s South End. The restaurant and brewery reopened Friday at 5 p.m. To maintain social distancing, we’re told all guests will be asked to sit at their tables, unless visiting the bar. Even in line, green X’s are painted on the ground to show where it’s safe to wait.

“We’re just thrilled to be back and have guests back on-premise and our team back at work,” says co-founder, Seth Stidham, who says all staff will also be wearing masks.

In addition to restaurants, hair salons are also allowed to reopen under Phase 2 at 50% capacity.

“It’s been hard financially,” says hair stylist Mistie Creech, who operates her own hair studio out of Sola Salons in South End. Creech was forced to close for 8 weeks, but as soon as Governor Cooper gave the go-ahead she says she began booking clients.

Creech says she’s been in touch with clients alerting them to the new safety protocols in place.

“The client is supposed to text me from the car and then I will let them in once my client that’s there has left,” she says.  “They’re to wear a facemask, especially in the common areas and then in the salon too I’m going to ask that of them. Then when they walk in the salon, they will go wash their hands first and then they will sit in a seat that has been sanitized to the 9th degree. They will have a new cape, new towels. There will be no magazines.,” she says.

Creech says because of capacity restraints she is already booked solid through June, and plans to work 12- to 13- hour shifts, 6 days a week to make up for lost time.

Each of the business owners we spoke to, all echoing the same plea to the public, to be patient as everyone works to adjust to this new normal.