North Carolina Governor Roy Cooper is expected to lift all capacity and social distancing restrictions on businesses on June 1. 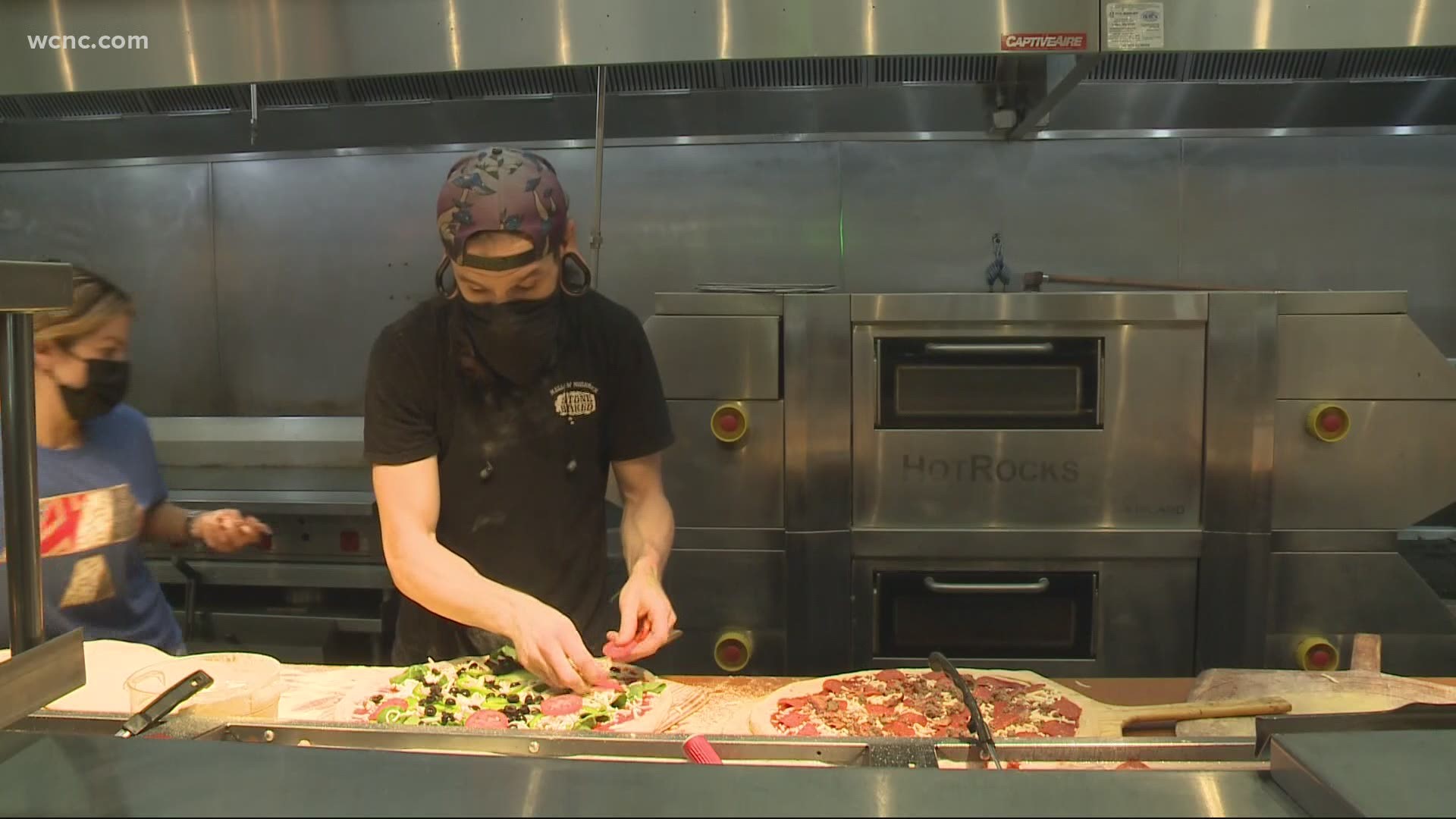 CHARLOTTE, N.C. — The hospitality industry across North Carolina is facing a worker shortage as businesses return to normal operations.

Mellow Mushroom in Uptown Charlotte is making do with the staff it has but needs more help to keep up with the demand and the recent increase in sales.

"We're dealing with being tremendously understaffed,” Richard Bellino, front-of-house manager at Mellow Mushroom in Uptown said.  “We're on all job platforms, but it's not receiving quite enough applicants."

This restaurant is looking to fill 10 to 15 positions, including managers, servers, cooks, and bartenders. The pizza chain’s other two Charlotte locations are facing similar challenges, Bellino said.

"We're across all job platforms,” Bellino said. “We have three managers monitoring those platforms on a daily basis, and we just can't find employees fast enough."

The lack of employees is affecting restaurants and many other industries across the Charlotte area. Charlotte Premium Outlets held a job fair last week to fill retail positions, and Carowinds is delaying the opening of Carolina Harbor water park due to staffing shortages.

“I believe it's unemployment. I believe that's a big part of it,” Bellino said. “I think people have because of the pandemic changed industries. I think not as many people are coming back, and I also think it's just a competitive market."

Bellino said Mellow Mushroom is offering some 401(k) options and benefits to try to be competitive in attracting candidates.

“It’s a good time if you’re looking, if you enjoy the hospitality industry, to make money and to capitalize on that,” added Bellino. 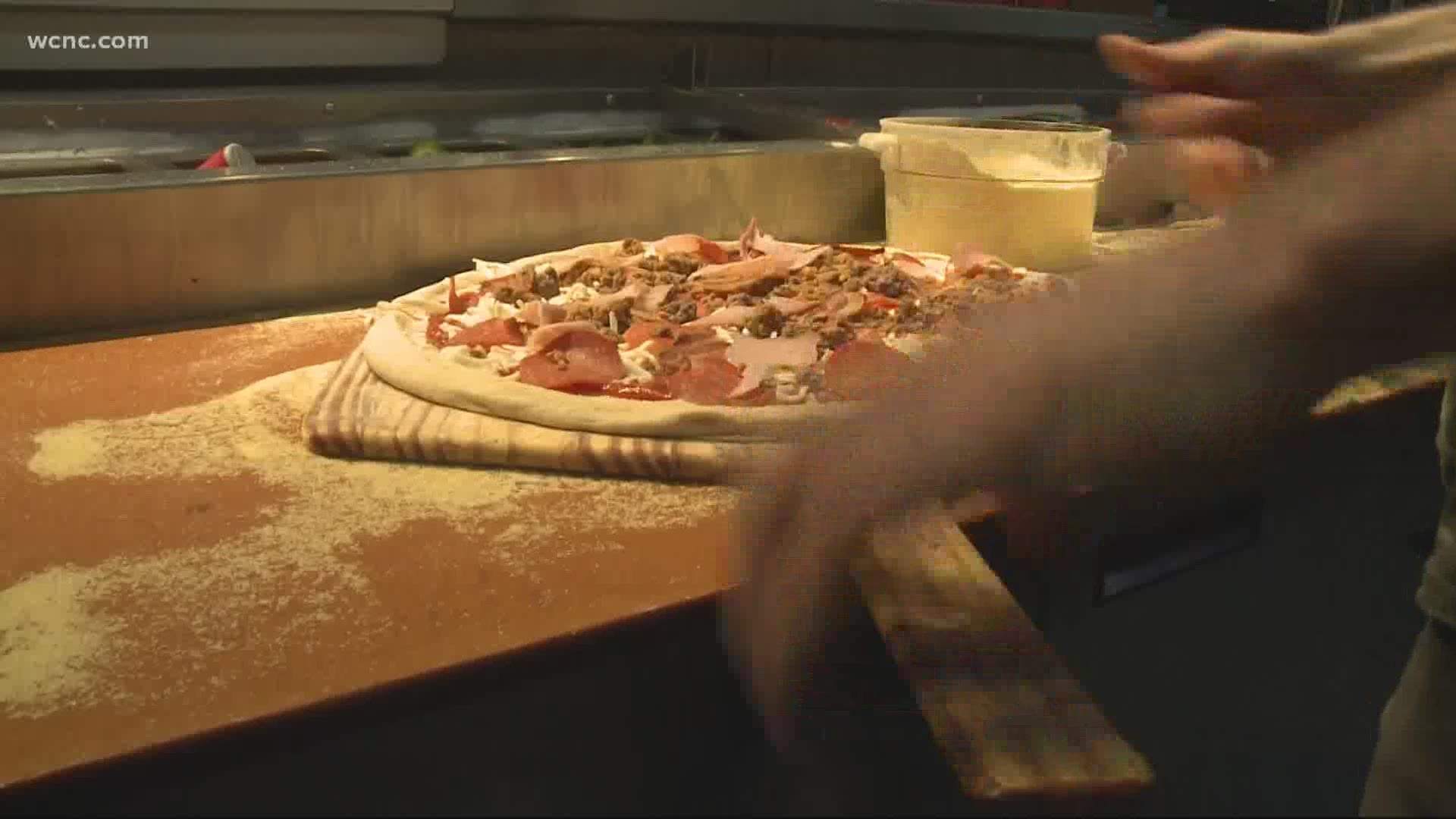 A Charleston chef launched a new app called GIGPRO, which was designed to address the shortage of workers.

According to a news release, it connects businesses with workers to cover shifts after an employee calls out sick, the dreaded no-show, or to help cover the gap between being understaffed and overstaffed.

“Really all you have to do is post a gig and select whoever you want to come in,” Ben Ellsworth, founder of GIGPRO and a Charleston restaurant industry veteran said.

Ellsworth said he thought of the idea after struggling to fill a dishwashing shift.

“I can pull out my phone at the end of the night. I can get a stranger to pick me up and take me across town. I can book a cabin anywhere in the world,” Ellsworth said, “but I can’t get this shift filled.”

The app allows businesses to alert anyone who’s available that day to work, and the worker can arrive within minutes, according to a news release.

Ellsworth said some of the most popular gigs posted are for line cooks, dishwashers, front-of-house support, even server.

According to a news release, once the gig is completed, businesses pay and rate the Pro’s performance with two clicks. Pros are covered with an Occupational Accident Insurance policy while on the job and GIGPRO handles the tax paperwork at the end of the year.

“If the person comes in and they don’t work out, you know, you never have to invest another dime in them again, and that door swings both ways,” said Ellsworth.

The app started in Charleston, and Ellsworth said the platform is posting more than 200 gigs a week in that city. Since November, he added the app has partnered with 149 businesses in Charleston, paid out more than $100,000 to the workers, and filled more than 1,000 gigs.

The app is working with a handful of businesses in the Charlotte area as it launches in the Queen City.

“We want to get back into restaurants with our friends and family, and the staff is just not there,” Ellsworth said. “So, we’re really trying to rally people.”