'To me, it's incompetence' | As some struggle to get unemployment benefits, state audit shows others were overpaid last year

A state audit found the department was unable to properly track people who were being overpaid with their benefits last year. 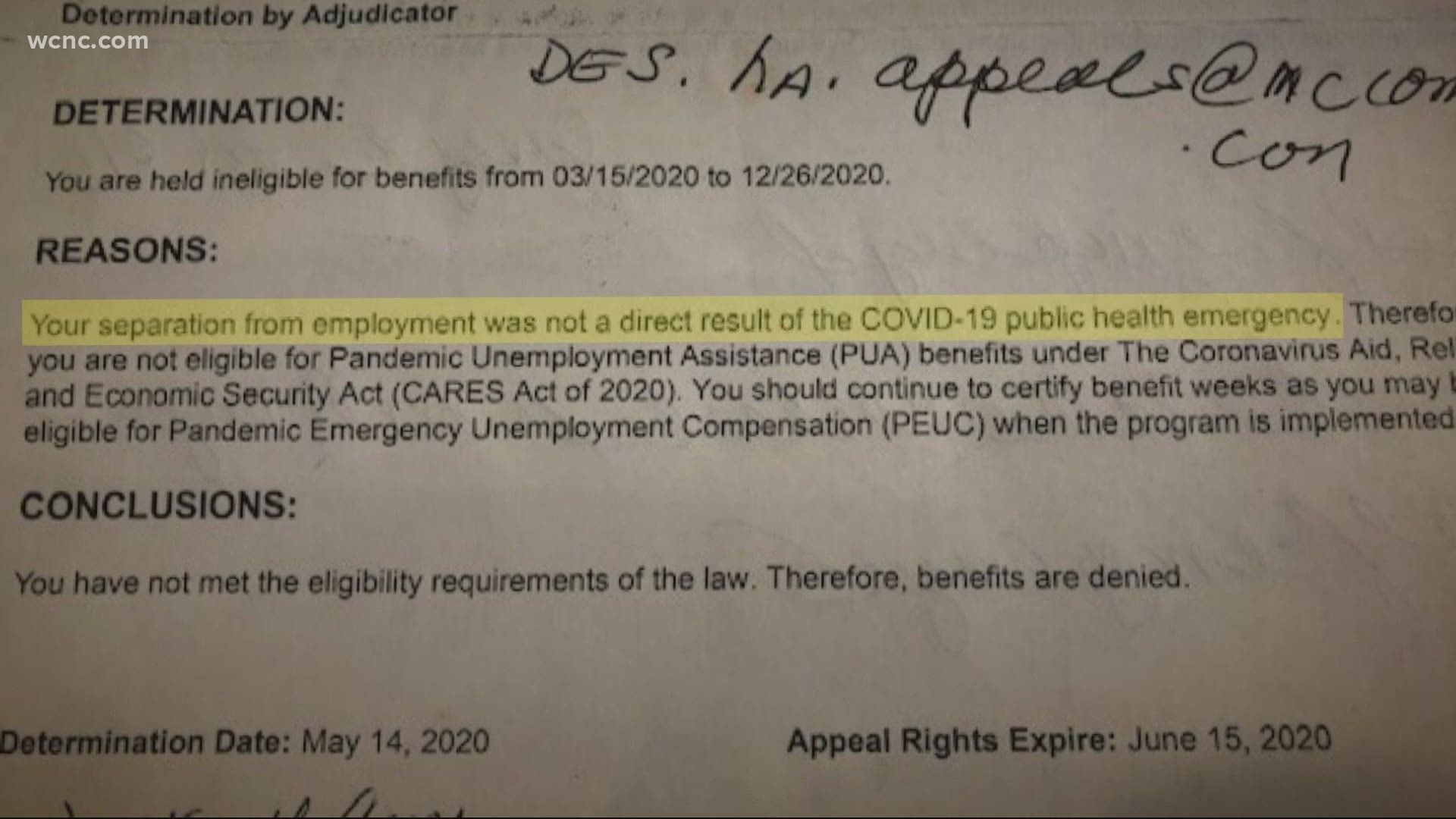 CHARLOTTE, N.C. — The WCNC Charlotte Defenders team is revealing past problems with North Carolina’s unemployment system. It comes as the North Carolina Department of Commerce is under scrutiny for how it handled a surge of claims during the coronavirus pandemic.

Many people say they’ve waited weeks or even months without any word about their benefits.

Now, the Defenders team is learning a state audit found a different issue with the unemployment system just last year. Specifically, the audit found the department was unable to properly track people who were being overpaid with their benefits.

The Defenders team wanted to find out what happened to the money from those overpayments and whether it could have helped people struggling now, but it’s been hard to get an answer from the Department of Commerce.

Fewer flights in the skies means turbulent times on the ground for travel agent Margaret Rossetti.

“The refrigerator died a week ago, the next day my husband’s car died," Rossetti said. "Yesterday my car died."

Her bills have been piling up, while demand for her services has dramatically dropped.

“It was the direct result of COVID-19,” Rossetti said.

Rossetti said she got stuck in the revolving door while making constant calls to fix an error on her application.

“One day I was on hold for six and a half hours,” she said.

Since she’s self-employed, she was not eligible for traditional unemployment benefits, so her claim was transferred to the Pandemic Unemployment Assistance Program or PUA.

“I meet all the criteria,” said Rossetti.

However, after months of waiting, Rossetti said she received a letter denying her benefits. It claimed her job loss was not a direct result of the public health emergency.

“It’s just a culmination of bad things happening and I don’t know where to go next,” Rossetti said.

Rossetti is among many North Carolinians who’ve been delayed or denied benefits during the pandemic, which has raised questions about the unemployment system as a whole.

Attorney Bill Trosch represents some people struggling to get benefits.

“They’re not getting it when they feel they should get it,” Trosch said.

While some people have been unable to get paid, others were overpaid just last year. According to a state audit of the fiscal year 2019, "the primary cause of overpayments is due to unreported or under-reported earnings by claimants while they claim benefits."

“I am a little surprised at the findings of the audit because that shouldn’t happen,” said Trosch.

The report says since the department switched systems in 2018, they have not been able to perform weekly cross matches for new hires to identify potential overpayments.

Instead, the department relied solely on tips and leads.

“If they’re not checking, fact-checking so to speak, how much people are getting paid and who’s getting overpaid that money could be used elsewhere,” Trosch said.

In a letter from March of this year, the chief financial officer for the Department of Commerce said she agreed with the findings from the audit and implemented recommendations to improve coordination between the parties involved.

MORE ►Click here for a resource guide on how to manage unemployment benefits.

“If they have been paying out a lot of money, overpaying, what are they doing?" Rossetti asked. "Just holding back now?”

After exchanging several emails with a department spokesman, the Defenders team is waiting for an answer about what happened with the overpayments.

Rossetti said she appealed the decision denying her unemployment benefits, but now is dealing with more delays throughout that process.