1 dead, 19 injured as car hits crowd at rally in Charlottesville; driver in custody

Virginia governor Terry McAuliffe announced during a press conference that a 32-year old woman was killed when a car rammed into a crowd of protesters at a white nationalist rally in Charlottesville. The driver was taken into custody. 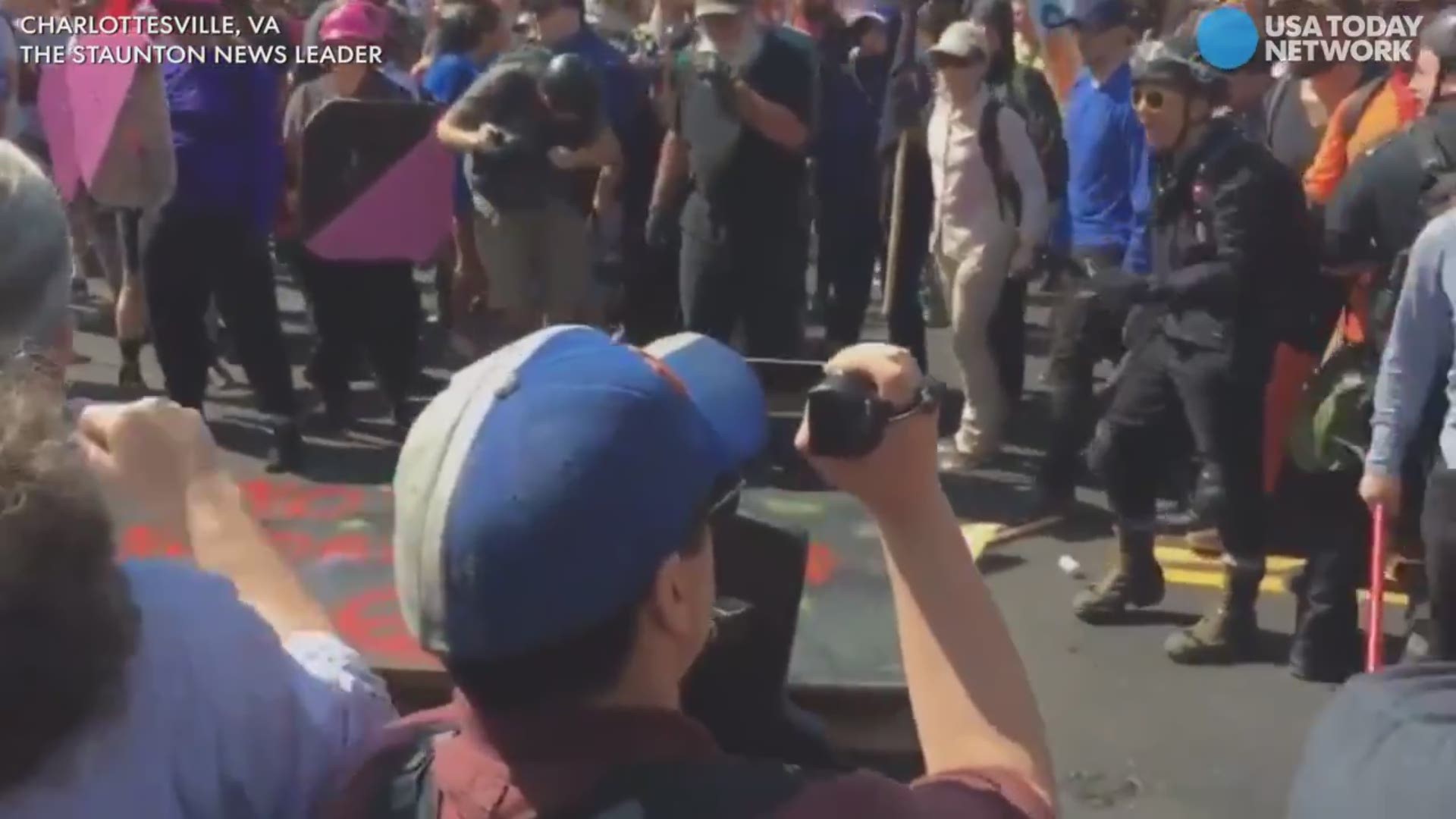 A 32-year-old woman died and at least 19 people were injured Saturday when a car crashed into a crowd of peaceful protesters leaving a "Unite the Right" rally that officials had declared an "unlawful assembly." State officials said the driver was in custody.

Al Thomas, Charlottesville police chief, said 35 people were injured in clashes between opposing groups and in the car crash. Their injuries ranged from life-threatening to minor, he said. The driver of the car will be charged with criminal homicide, Thomas said. Albermarle County Regional Jail officials identified the suspect as 20-year-old James Alex Fields of Ohio.

Police officials said Fields would be charged with one count of second degree murder, three counts of malicious wounding and one count of hit and run. In addition, the FBI announced Saturday night it would open a civil rights investigation into the circumstances of the death. 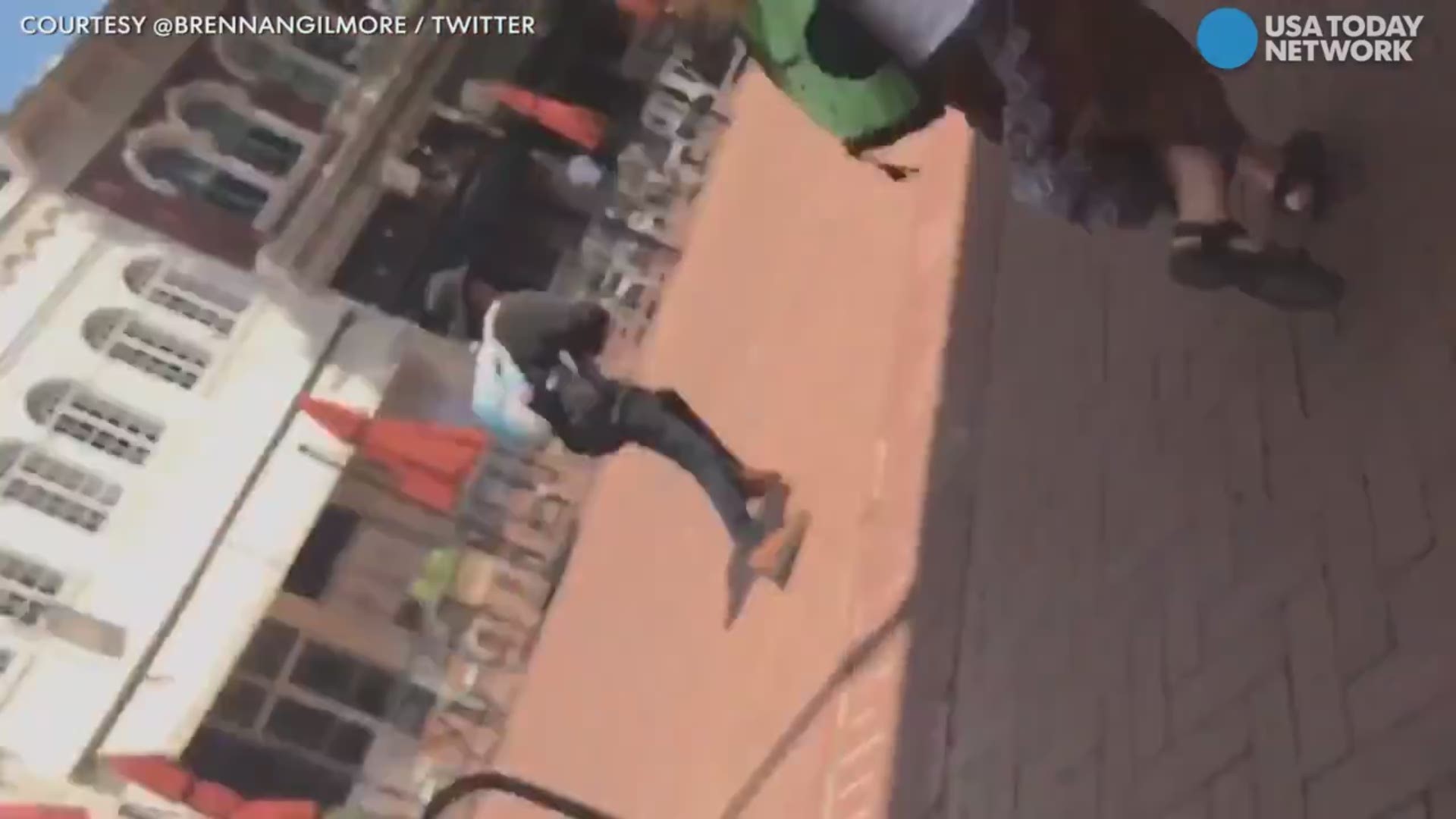 “Our hearts break for the casualties and injuries,” Charlottesville Mayor Mike Signer said at a press conference.

About three hours after the car crash, a Virginia State Police Bell 407 helicopter crashed about 7 miles from the scene. Police reports said the helicopter crashed in a wooded area and the two pilots died. No one on the ground was injured. The helicopter had been assisting in police supervision of the protests.

The driver of a silver Dodge Challenger plowed into one of the groups streaming away from the rally at Emancipation Park through the narrow downtown streets.

President Trump, on vacation at his golf club in New Jersey, condemned “in the strongest possible terms” what he called an “egregious display of hatred, bigotry and violence on many sides” in Charlottesville. He called for “a swift restoration of law and order and the protection of innocent lives.”

Trump said he spoke with Virginia Gov. Terry McAuliffe and “we agreed that the hate and the division must stop and must stop right now.”

McAuliffe delivered a message to the white supremacists at an evening press conference: "Go home, you are not wanted in this great commonwealth, shame on you."

The governor declared a state of emergency shortly before 11 a.m. as the earlier protests and counter-protests turned unruly. He said he was “disgusted by the hatred, bigotry and violence” and blamed “mostly out-of-state protesters.”

The violence played out against a backdrop of unofficial, armed militia groups ringing the park, where the rally was called to protest the planned removal of a statue of Confederate Gen. Robert E. Lee.

Some 500 protesters among the white nationalist and alt-right groups left the park shortly after state police, using megaphones, declared the gathering an "unlawful assembly" at 11:40 a.m., about 20 minutes before the rally was scheduled to begin.

Clusters of alt-right activists and counter-protesters remained, however, raising fears of more clashes. Police then put on gas masks as they stepped up efforts to disperse the crowds, which then left the park.

McAuliffe declared the state of emergency to give local authorities more resources to quell the disturbance. Officials had already deployed police to maintain order and McAuliffe had placed the Virginia National Guard on standby.

This is the Virginia statute on unlawful assembly #cvilleaug12 pic.twitter.com/dyqdEN7k71

The clashes, mainly between white nationalists and anti-fascist groups, broke out as crowds moved toward the park where the Lee statue is located. At one point, dozens of people used wooden poles from their flags and banners as weapons. Others threw trash and bottles into the opposing ranks of protesters as the crowds swelled.

Numerous protesters came prepared, wearing helmets and flak jackets and charging into crowds holding plastic riot shields. Protesters on one side of a square held up anti-fascist signs and Black Lives Matter banners, while groups on the other displayed Confederate flags and iron cross banners.

Laurel Cummings, who works at the Oakhurst Inn in Charlottesville, said people have been canceling their rooms this weekend due to concerns about safety. She has also been warning guests about avoiding the downtown area.

“I came in to work today praying that no one was going to check in with a Swastika on their arm,” she said. “I knew I would refuse to check them in. If that gets me fired, I’m OK with that.”

From his vacation home in New Jersey, Trump tweeted: "We ALL must be united & condemn all that hate stands for. There is no place for this kind of violence in America. Lets come together as one!"

Unidentified militia has arrived at #EmancipationPark ahead of the #Charlottesville rally with guns in tow. pic.twitter.com/zCLCBU78PF

Saturday's violence follows a spontaneous march the previous night by torch-wielding protesters on the University of Virginia campus that was broken up by police as an unlawful assembly after scuffles broke out and pepper spray filled the air.

That came after a federal court injunction rejected the city's earlier attempt to move the "Unite the Right" rally to another park.

U.S. District Judge Glen Conrad issued the injunction late Friday in a lawsuit filed against the city by the American Civil Liberties Union on behalf of right-wing blogger Jason Kessler, a local resident.

Conrad ruled the city's attempt to revoke Kessler's rally permit and move the protest to another park "was based on the content of his speech.”

The judge noted the city did not try at the same time to move counter-protesters to another location.

On the eve of the rally, McAuliffe, a Democrat, said he would prefer that no one shows up at the "Unite the Right" rally.

"I want to urge my fellow Virginians who may consider joining either in support or opposition to the planned rally to make alternative plans," he said.

Police chief Thomas said the unfolding events created a "lot of anxiety" in the community, but he felt it had sufficient resources to meet the "significant challenge."

City authorities were particularly alarmed by Friday night's march by hundreds of white nationalists who gathered at the feet of a statue of Thomas Jefferson on the UVa. campus, chanting "You will not replace us."

Fights broke out as some marchers bearing tiki torches swung them at others, the Daily Progress reported.

UVa. President Teresa Sullivan said she was "deeply saddened and disturbed by the hateful behavior" displayed by the marchers.

Signer, who opposed the downtown rally, said the city would honor the judge's ruling, but added there is "no constitutional right to incite or promote violence by anyone who will be gathered this weekend.”

"Democracy may be noisy and it may be messy, but it remains the best system of government that people have figured out to use to govern themselves,” he said.

The ACLU of Virginia and the Albemarle County-based Rutherford Institute, which backed Kessler's suit, said in a letter to city officials that while the message of the "Unite the Right" rally "may raise strong feelings of opposition among area residents and political leaders, that opposition can be no basis for government action that would suppress the First Amendment rights of demonstrators who have acted according to the law.”

In the past few months, white nationalist groups have paid particular attention to Charlottesville, a progressive college town where over 80% of residents voted for Hillary Clinton.

The Charlottesville City Council voted in May to sell the Lee statue, but a judge issued a temporary injunction that blocked the city from moving the statue for six months, The Daily Progress reported.

After the vote to remove the statue, several dozen demonstrators, led by prominent white supremacist Richard Spencer, gathered at night by the Lee statue, wielding torches.

In July, Ku Klux Klan members held a rally in Charlottesville in Justice Park, where they were met with more than a thousand upset counter-protesters.

White nationalist groups continue to return to Charlottesville partly because they saw the May torch light gathering as a great success, noted Heidi Beirich, director of the Intelligence Project at the Southern Poverty Law Center.

“They loved the imagery of that. They were over the moon about that,” she said. “They viewed it as having been a wonderful recruiting tool."