After a deadly year with 107 homicides in 2019, city leaders studied the data in hopes of forming solutions to help curb the violence in 2020. 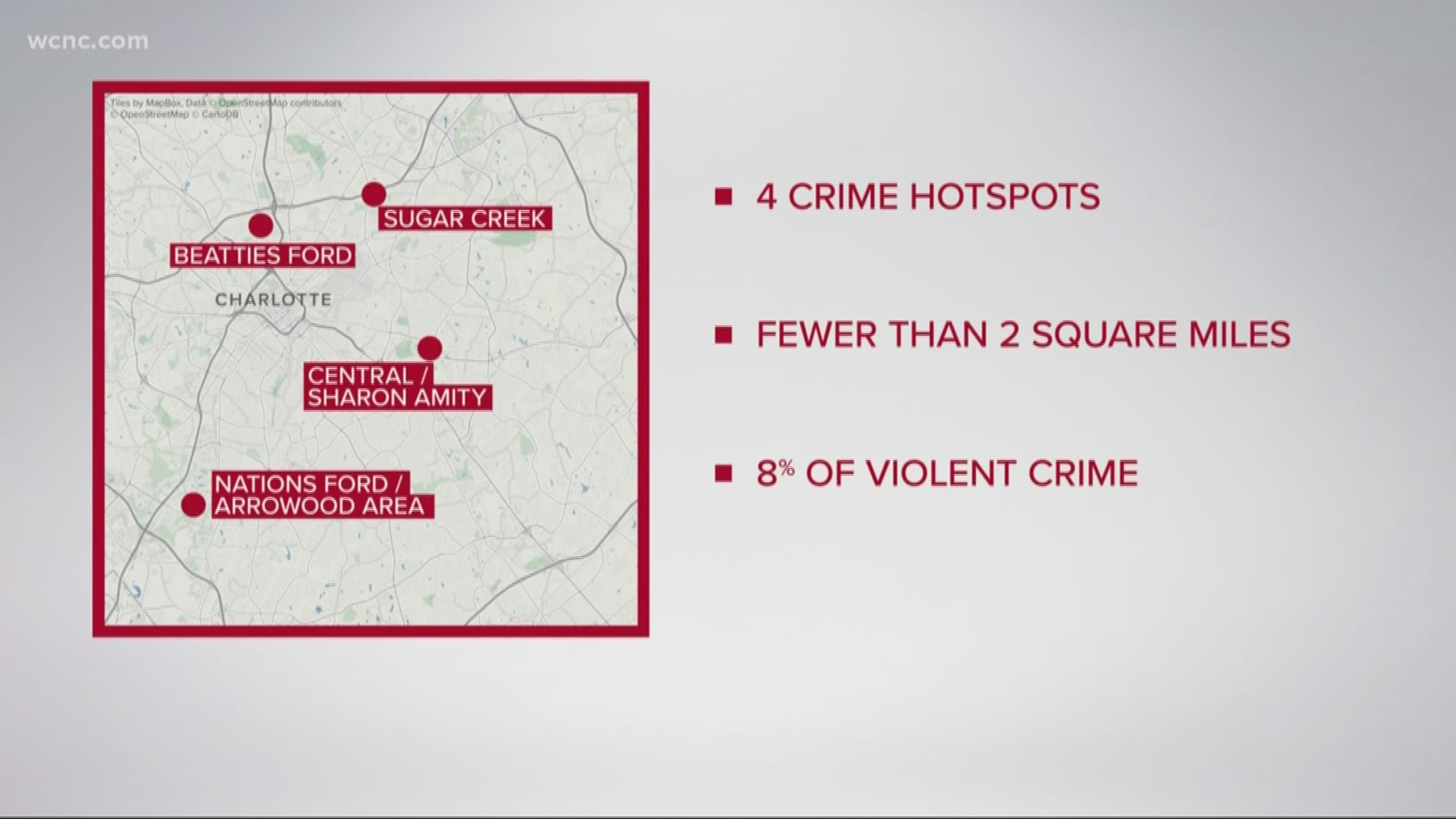 CHARLOTTE, N.C. — Charlotte city leaders learned new details in their first strategy meeting of 2020, as they poured over detailed crime data in hopes of creating solutions to end an uptick in violence.

"It's been a really tough year in Charlotte," said Rebecca Hefner, director of the City of Charlotte's Data & Analytics team.

She helped give a presentation, that was about six months in the making according to Mayor Vi Lyles, to city council after 2019 saw 107 homicides.

Hefner called the violence in the Queen City a public health issue as she noted a reoccurring cycle that usually preempts a murder.

"The primary risk factor for victimization and perpetration is previous exposure to or an experience of violence," she said.

She, along with CMPD Deputy Chief Gerald Smith, presented the council with what they dubbed as the city's "durable hotspots."

The four areas comprise fewer than two square miles of CMPD jurisdiction and account for about 8 percent of violent crime in the city.

Each area has similar characteristics, including housing instability, drug problems, among others, according to CMPD.

The I-85/Sugar Creek area has 13 low-budget, cash-only motels, according to CMPD. They believe there's a lack of accountability when it comes to business owners and what they allow to happen at the motels, including prostitution.

The area of Beatties Ford Road and Lasalle deals with illegal drug activity, as well as a sizable homeless population, and a concentration of check cashing stores but lacks retail stores.

Other priority areas like the Nations Ford/Arrowwood area have a predominantly Hispanic and minority-based population. Officers said the largest crimes in the area are armed robberies of Hispanic victims since perpetrators know they are likely to carry cash and are seen as "easy victims."

At Central Avenue and Sharon Amity where there are communication barriers, it’s an entry point for refugees, and there’s cultural mistrust of institutions, according to the report.

CMPD has put an influx of resources in the trouble-spots, but crimes continue to happen.

It's why the city wants to take a collaborative approach by digging into data, looking at root causes, including grass-root efforts in neighborhoods, and enacting evidence-based solutions.

"No one thing that in and of itself will make the community safer," Hefner said.

"I really think that the neighborhoods are going to step up and help us make good decisions," Mayor Lyles said.

City leaders continued to ask for more information on different points of data on Monday night as the mayor and city manager made it clear that the meeting was just the start of creating long-term solutions.

But some were frustrated the city hasn't acted enough.

"We have the homicide task force report from 2005, we have the criminal justice report from 2008, they've made all these recommendations and here we are talking about the same things on a different day," Mayor pro tem Julie Eiselt said. "So, when's it going to change?"

Possible solutions, such as more youth programs and a Violence Interruption Coalition, were tossed around at the strategy meeting.

"I want to hear more than about the four neighborhoods we've already known that accounts for 8% of the city's crimes, there's 92% we didn't talk about today," said Rob Dawkins, with SAFE Communities.

Violence Interruption Coalitions, groups in which trusted community leaders are called to help deescalate or mediate a problem before it gets out of hand, have been successful in other cities, according to Hefner.

Council members who are on the Safe Communities Committee will meet later in January to lay the framework of where the conversation goes and what solutions will be brought to the table.

Meanwhile, community leaders continue to hope for less talk and more action to prevent more killings in a city that's already seen so many.