A Clover woman with two convictions for drinking and driving and one case pending, got into a deadly Saturday morning crash in south Charlotte. 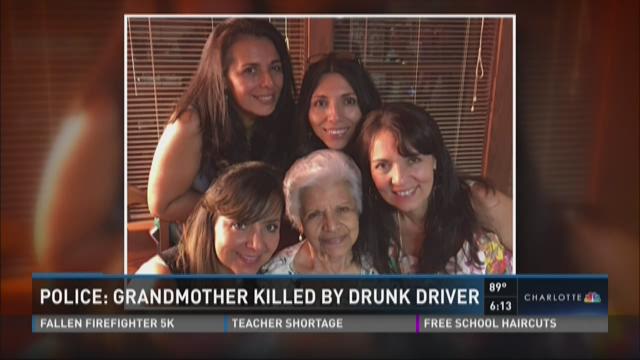 CLOVER, S.C. -- A Clover woman with two convictions for drinking and driving and one case pending, got into a deadly last Saturday morning crash in south Charlotte, and upon her release from the hospital, she was charged with second-degree murder.

Police say her Hyundai crossed the median on South Tryon near Moss and slammed into a Toyota Camry, killing Cecilia De Gonzalez, 79, and seriously injuring her daughter and son-in-law.

One of De Gonzalez’s daughters tells NBC Charlotte, “My mom passed because of her. She shouldn’t be on the street. She should be held responsible.”

De Gonzalez lived in Colombia and was dedicated to her faith and community by helping abused girls and the homeless. Four of her eight children live in Charlotte and she was in town visiting.

Her infectious smile was captured in a picture on the beach in Hilton Head less than 24 hours before she died.

However, Conkin still had hers. Jetton says she could have faced lengthy suspensions had the convictions all happened in North Carolina, but she is from South Carolina where the punishment isn’t as severe. She has one DWI in Mecklenburg County and two DUI cases in York County, one which resulted in a conviction.

Since the offenses happened in different states, Jetton says that's where things get tricky.

Jetton says states do utilize technology to communicate with one another and a previous conviction can be used against you in your home state. Still, he says cases can fall through the cracks.

“What if there are two that are pending at the same time and you get convicted of one, and before that conviction can even be put in the system, you are convicted of the other one, so neither place knew about the other one,” said Jetton. “It’s not a perfect system."

Conkins’ two convictions went through the courts around the same time, so it is possible that they were each treated as first offenses.