3 with Legionnaires' disease after hotel stay

The North Carolina Division of Public Health is investigating after three people came down with Legionnaires' Disease following a stay at a popular hotel. 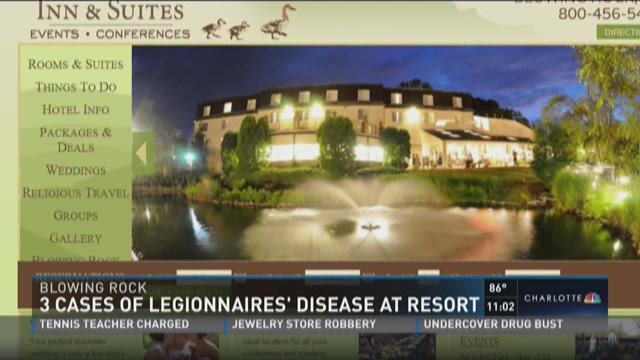 BLOWING ROCK, N.C. -- The North Carolina Division of Public Health is investigating after three people came down with Legionnaires' Disease following a stay at a popular hotel.

All three people were guests at the Meadowbrook Inn in Blowing Rock.

According to the CDC, Legionnaires' is a respiratory disease that can lead to severe pneumonia.

“We were stunned. I have worked on this property for 15 years and we have had no issues with health or public health,” said Meadowbrook Inn Consulting General Manager Vicky McLean.

This is the timeline:

June 14 - Health officials were called out to Meadowbrook Inn, following reports of the bacteria.

June 17 - The resort conducted initial testing, no Legionella was present.

Those results will take another 10 days.

The CDC said Legionella is a type of bacteria that can lead to severe pneumonia and is found mostly in warm waters.

In this case, the Health Department pointed to a hot tub at the resort, which Meadowbrook says it immediately shut down.

The hotel is notifying the 1,100 guests who stayed there between April 15 and June 15.

As of now management doesn’t believe there is a health risk to guests.

“We’ve been working very closely with health officials, and at this point, no definite exposure at our hotel or anywhere else in the community has been identified,” McLean said.

It is not clear if all three guests were together and if they were exposed at the same time; the Health Department is still investigating.