The United House of Prayer For All People in north Charlotte has been linked to over 140 COVID-19 cases and at least 5 deaths from the virus. 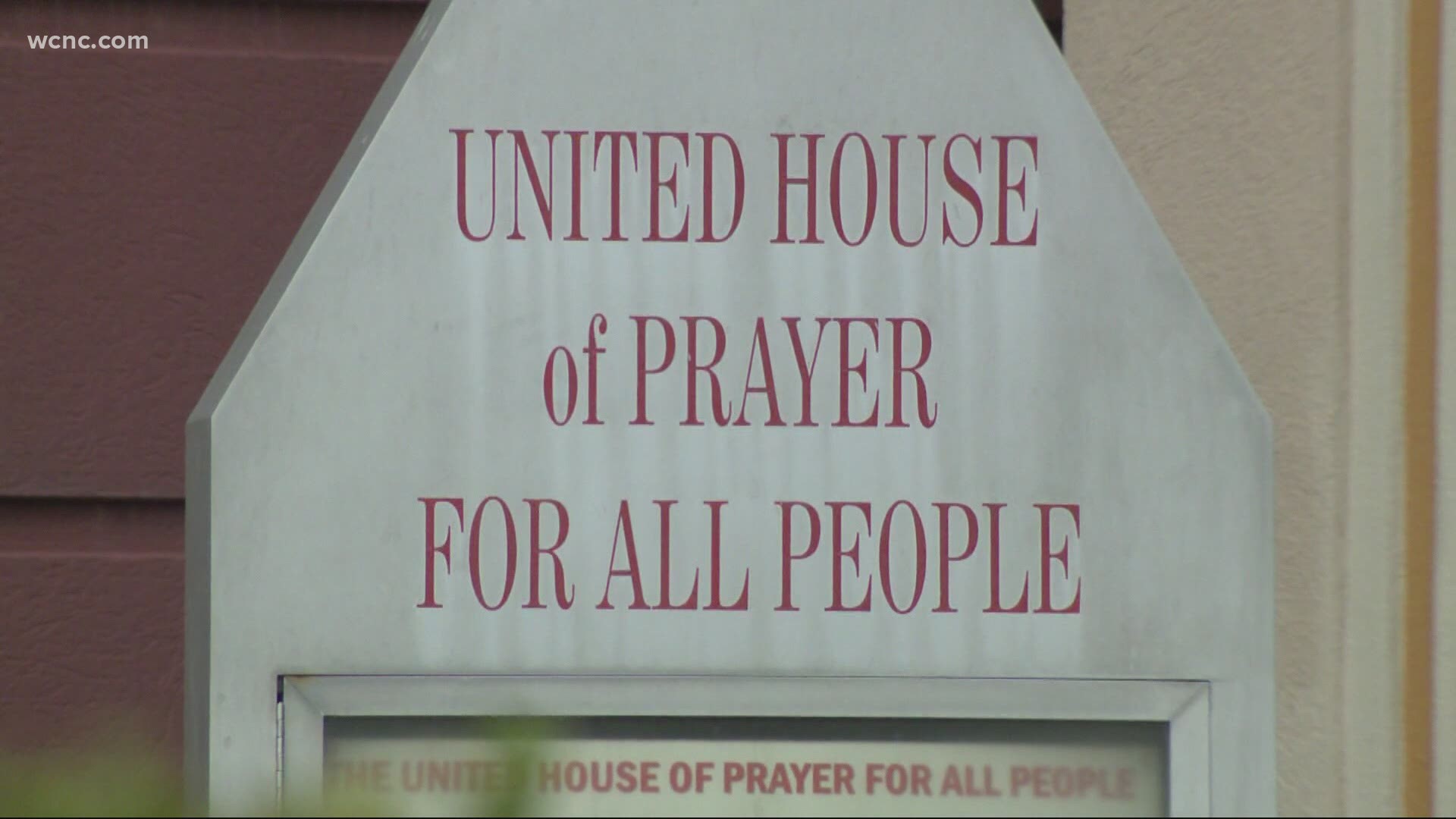 CHARLOTTE, N.C. — For the first time since the deadly COVID-19 outbreak, we're hearing from members of the United House of Prayer. They are choosing to remain anonymous to prevent backlash from the church.

Mecklenburg County has prohibited the church from holding in-person events after more than 140 cases and 5 deaths have been linked to an event at the church earlier this month.

The cluster at Madison Saints Paradise South Senior Living has increased to 19 confirmed cases – 16 residents and 3 staff. Public Health has attempted to contact at least 192 close contacts of confirmed cases.

Between the dates of October 4-11, more than 1,000 people from various states attended convocation events at the church. The members say the congregation is now divided after a massive deadly outbreak.

"Many of the members were not ok with the convocation proceeding on as normal," a member who did not want to be identified told WCNC's Billie Jean Shaw.

According to the members, Charlotte's convocation was a part of a continuous 12- week event which started in July in Buffalo, New York.

Members including those from Charlotte traveled in large groups to convocation held at different churches across the east coast, even in states where the cases were the highest, like New York City.

The members we spoke to say the church began dealing with COVID-19 cases at that time and leadership never directed services to stop.

"There were other outbreaks and there were a lot of deaths within the church already," said the anonymous member. It's sad, the fact that people already died and you're going forward and just stepping over their bodies like their life didn't matter."

In a letter obtained by WCNC Charlotte's Billie Jean Shaw, the head bishop, who the congregation refers to as "Sweet Daddy C.M. Bailey," encouraged members to continue attending gatherings at the church despite state and county restrictions.

The letter, dated June 9, 2020, says in part, "I know there are restrictions statewide and citywide that you must comply with even though; I still expect you to come when you can."

The bishop goes on to list the church service times and writes, "don't make excuses for not coming when you are able to come."

The letter ends with the bishop acknowledging how pastors at different House of Prayer locations had instructed members to stay home.

The bishop responded by saying quote, “Don’t let my people become lazy and non supportive because of your weak state. Bring my children to the mountain. Let them come to service and give God everything.”

WCNC spoke to a member of the church who chose to stay anonymous. The member says church leadership continued to hold church services to continue to earn money, despite the financial and health impact of the pandemic.

As of Monday, more than 140 people who attended the North Charlotte church’s convocation have tested positive, at least 5 people have died and seven are in the hospital.

Plus there's an outbreak of at least 14 cases at Madison Saints paradise a senior living facility owned by the church.

According to the church's website, attendees stayed at four hotels throughout Charlotte.

Dr. Raynard Washington, the deputy health director for Mecklenburg County told WCNC's Billie Jean Shaw the county is making contact with those hotels as well as the states where people traveled from to attend the event.

Since the story broke, WCNC Charlotte has attempted to get in touch with church leadership for a response, but our requests went unanswered. The anonymous members say church leadership instructed their members to not to speak on the issue.

"It's hurtful, painful and on top of it, it's embarrassing," said one of the members. "It's almost like a betrayal especially moving the fact that they moved forward with it given the fact that many people in the church disagreed.

The county has now ordered the United House of Prayer to close its doors for in-person events until at least November 5th.

However, other House of Prayer locations in Gastonia, Rock Hill and Columbia remain open for worship causing concern for more cases. In a press conference Saturday, Dena Diorio, the Mecklenburg County Manager days she hopes the church abides by the order.

"We hope that they come to the right decision for themselves and do what's in the best interest of the public's health and safety."

The members say they hope the outbreak does not overshadow the decades of community services the United House of Prayer has done for Charlotte.

"We are law-abiding citizens, this situation is embarrassing and hurtful," the member said. "We have a community of people who support the organization and I don't want them to think this is what we are about, not caring about people, and being selfish," the member said. "That's not us."