Moms are juggling a lot and struggling. But there's help if you need it. 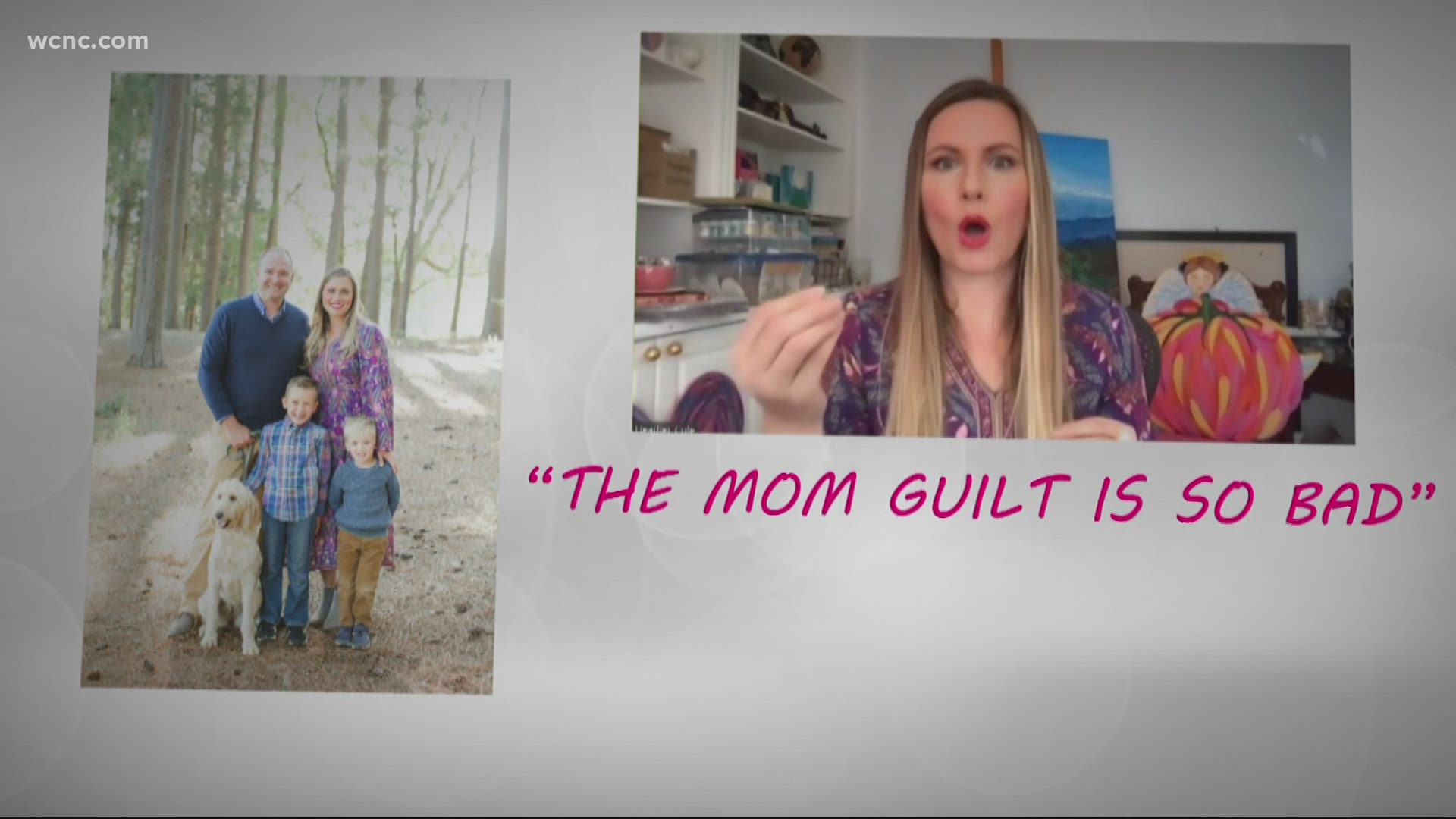 CHARLOTTE, N.C. — There is no question women are carrying a heavy burden in this pandemic and it’s taking a toll.

Depression is on the rise, but more people are also seeking professional help than in the past as women juggle careers, online schooling and so much more.

"The mom guilt is so bad," Heather Opal, an artist and mother-of-two, said.

"I sat at my desk, and I broke down, I cried," Carissa Charlemagne, a nurse and mother-of-five, said.

"When the kids need something they come to find me even if he is right there," Taylor Bowler, a magazine editor and mother-of-two, said.

It was several months into the pandemic when Charlemagne realized she was not OK.

"That's when it hit me, 'This is not OK. I’m not OK. This entire situation is not OK.' I was hurting," Charlemagne said.

RELATED: CDC: COVID was 3rd leading cause of death in US for 2020

She has five girls, ages seven to 15. At the start of the pandemic, she was also working as a nurse.

"I didn’t realize things were changing at home until everything kind of exploded," Charlemagne said.

"It was denial in the beginning," Charlemagne admitted. "It was all about my kids I just wanted to make sure they were ok, never really took a second to think about myself and then a bomb exploded with me."

She got a family therapist for the girls and her own therapist at Monarch, a Charlotte mental health center.

"That’s when I realized this is really impacting me, this is hard, I put myself on the back burner for so long it just all came tumbling out and I’m like what about me," Charlemagne said.

"Women have been wearing so many hats pre-pandemic, into the pandemic we are mothers, daughters, partners it's becoming overwhelming in a lot of ways," Amanda Matthews, the director of psychology at Monarch, said.

Taylor Bowler is a magazine editor whose two kids have been part of a learning pod she hosts every other week.

"It's a circus, total circus,"  Bowler said. "And it not so much that I’m physically exhausted at the end of the day, I'm mentally exhausted by all of the moving parts and all the details."

Bowler realized she needed to carve out some "me time" whenever possible and the Peloton has been her answer.

But Matthews said that may not be enough for everyone.

"We've been taught to be perfect and help everyone else, so a lot of times women let these symptoms go on without seeking help and they tend to not seek help until they have no other choice," Matthews said.

Charlemagne said therapy has been a lifesaver for her and her family.

"It helped me realize that it's OK to be a mom, to be a wife, but still need help. It forced me to put myself first and get the necessary help and the tools I needed," Charlemagne said.

We had an extended conversation with Matthews in hopes of offering real-life advice.

Here's some of what she said:

"You need to have realistic expectations for yourself and for others, and, above all, you need to give yourself grace," Amanda Matthews, the director of psychology at Monarch, told WCNC Charlotte's Michelle Boudin. "Things will fall through the cracks. Things won't get done. Dogs will bark during Zoom meetings. Children won't want to go to school. The internet will fail. Have those realistic expectations and know that what you're doing, the very best you're doing, is good enough that day."

Matthews said it's manifesting itself through physical symptoms and impacting their overall mental health.  "Women are complaining more and experiencing more migraine headaches, stomach aches, increased anxiety, and we've been taught to be perfect and to help everyone else, so a lot of times, women let these symptoms go on and on without seeking help, and they tend to not seek professional help until they really have no other choice because they feel that they're letting themselves down or they're not good enough. And what they need to realize is there are people there to help, there are people there to support you, and you deserve that help."

But Matthews points out some silver linings to this last year: People are more aware of mental health, and now it's become more socially acceptable to admit when you aren't having a good day.

"We're beyond the pleasantries because so many people are experiencing similar things, it's OK now to be a little bit more honest," Matthews noted.

Things to look out for: