Pfizer and Moderna COVID vaccines use mRNA technology, so how does it work?

Most vaccines put a weakened or dead virus in your system to trigger an immune response, but this new generation of medical tech does something very different. 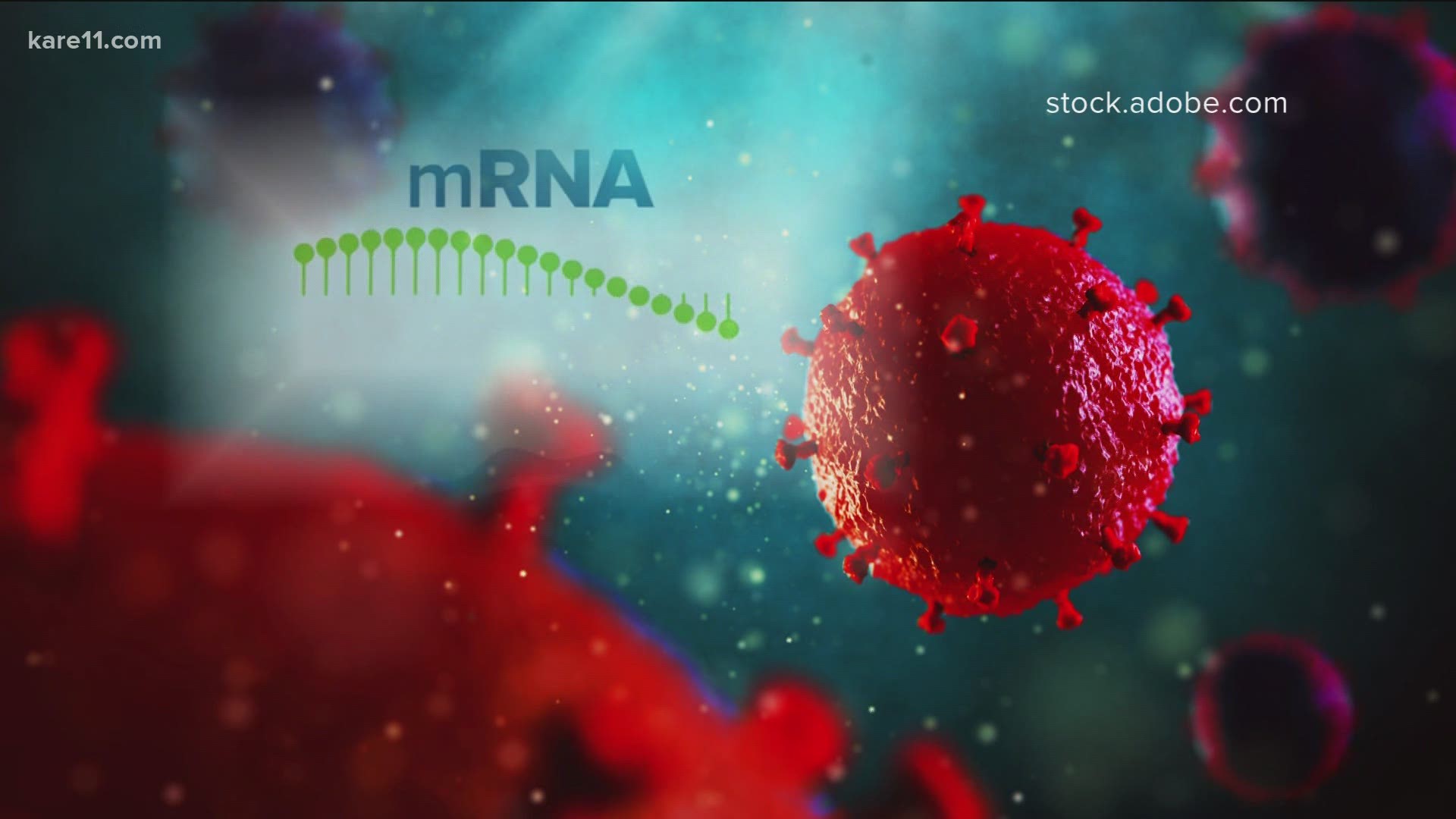 MINNEAPOLIS — The Pfizer and Moderna COVID-19 vaccines are the first approved for humans using a technology called mRNA.

While you likely just started hearing about mRNA within the last year, it's been studied for a lot longer than that.

"The mRNA vaccines are a major leap forward, I think, in the study of vaccines," said Dr. Tim Schacker, Vice Dean for Research at the University of Minnesota Medical School.

Why is mRNA vaccine technology so significant? First, you need to understand how they work.

Most vaccines put a weakened or dead virus into your body, which triggers an immune response.

But mRNA is different. There is no virus in the vaccine. Instead, it works kind of like an instruction manual, which teaches your body to build a certain protein found on the virus. In the case of the virus which causes COVID-19, it's the spike protein. That prompts your body to build antibodies without ever actually being infected.

Schacker says the spike protein is the part of the coronavirus to which your immune system reacts. Schacker says, in some cases, scientists can find the equivalent of that in other viruses and basically insert the code into the mRNA construct.

"This is new technology that will make it more direct, more straightforward to design vaccines for other infectious diseases and tumors," Schacker said.

Schacker says he already knows of groups using this method to work on a vaccine for HIV.

"I think that's probably where a lot of the focus will go and I think influenza is another target that people are working on," he said.

Schacker says there are two big advantages to mRNA vaccines. First, they seem to trigger a better immune response, which likely makes them more effective. Second, they're made more efficiently.

"You don't have to set up a complicated culture process to make the vaccine, like we do with some vaccines. This is laboratory made," Schacker said. "You take the sequence of the virus, you encapsulate it in some lipid, and you're done. You've done it."

So, are we going to start seeing more vaccines be submitted for FDA approval more quickly?

Schacker made clear that while future mRNA vaccines might be produced more quickly, they will still face the standard process for FDA approval.

The COVID-19 vaccines were given emergency use authorization because of the pandemic.

RELATED: Scientist behind coronavirus shot says next target is cancer