Erin Strine took the video and posted it as a way to warn others who are thinking of flying. Some people on the flight were wearing masks and some were not. 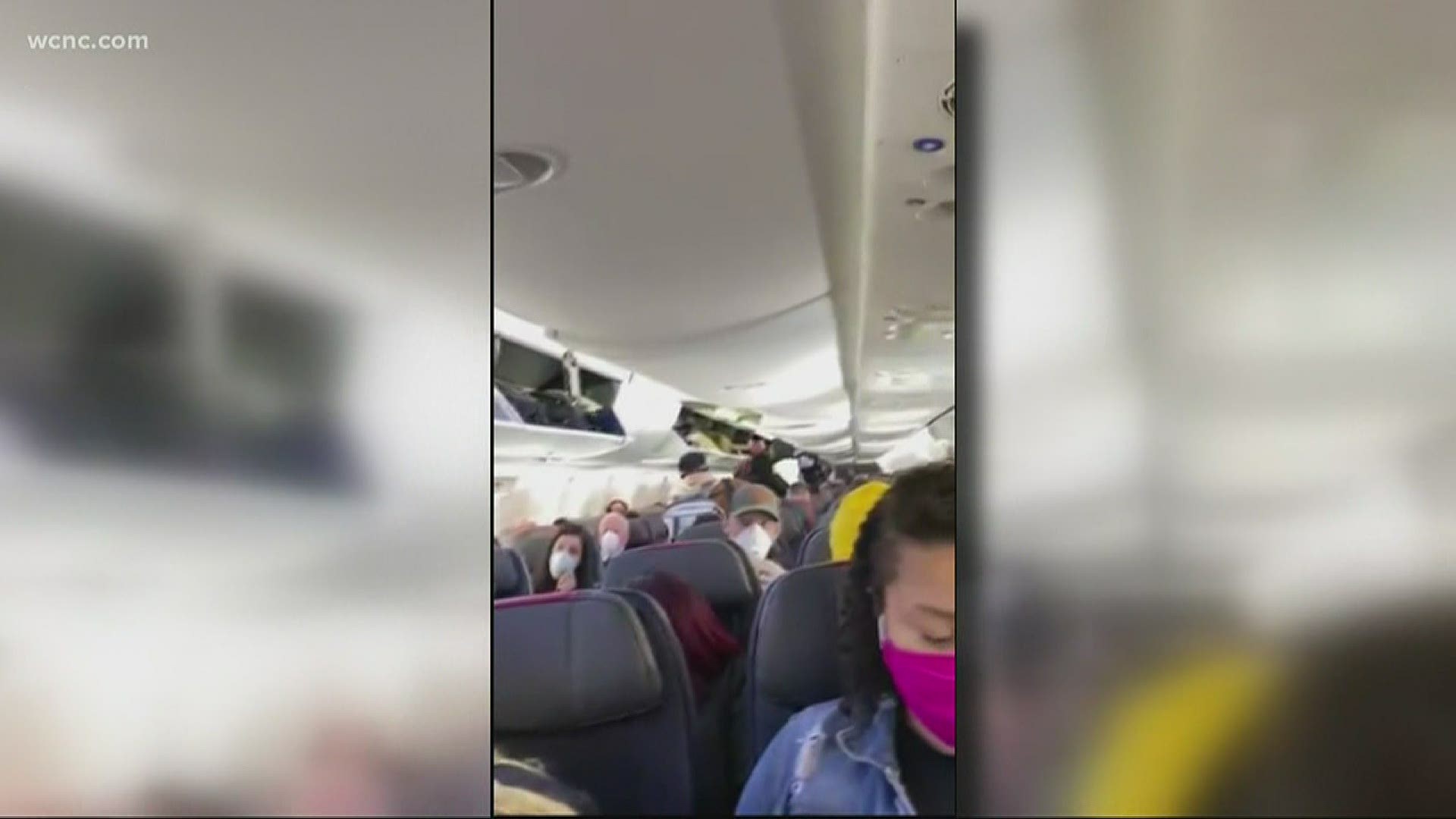 Erin Strine boarded an American Airlines flight from JFK to CLT on April 25, trying to get home to see her family in Chapel Hill after her grandmother passed away.

Strine said she spent the last six weeks staying home at her apartment in Brooklyn. It came as a shock, she said, when she got on the flight and saw how many people were packed onto the flight given the circumstances across the country.

"By the time I got on the plane, it was very full, which was ... I was shocked,” Strine said. “I was just completely stunned by the whole situation.”

Strine took the video and posted it as a way to warn others who are thinking of flying. Some people on the flight were wearing masks and some were not.

Strine said she was in a middle seat between two passengers, without an option to move to another seat.

“I just kind of started silently crying because I was so overwhelmed with just the fear that I had,” Strine said.

An American Airlines spokesperson sent WCNC Charlotte a statement, saying, “Last month, in response to CDC social distancing guidelines, American began temporarily relaxed seating policies for customers on our flights and reduced onboard food and beverage service levels. To encourage social distancing, gate agents will reassign seats to create more space between customers. Once on board — provided there aren’t any aircraft weight or balance restrictions — customers can move to another seat within their ticketed cabin subject to availability. Our team also monitors flights closely to maintain social distancing.”

Strine said passengers on her flight were told to move back to their original seats due to the flight being so full.

"To say that, you know, everyone needed to return to their original seat assignments and that we would not be able to move seats on this flight because it was very full was, it just, it seemed like, you know, absolutely irresponsible,” Strine added.

Last week, the Association of Flight Attendants-CWA called on federal officials to mandate masks for crews, employees, and passengers; require personal protective equipment; suspend all leisure travel until the virus is contained.

"Telling the passengers to wear masks and providing one for them if they don't have one themselves would be the least that they could do to ensure the safety of their passengers and their crew,” she added.

An American Airlines spokesperson told WCNC Charlotte that American Airlines does not require passengers to wear a face covering, but it may be required by local law to where one at the airport where a trip begins, where it ends, or where it connects.

Further, American Airlines allows all employees to wear gloves or masks if they wish, and in the wake of recently-updated CDC guidelines, they are working to provide masks to all front-line employees as quickly as they can obtain supplies without taking any actions that would deprive first responders the necessary supplies.

United Airlines recently announced it is requiring all flight attendants to wear face-covering or masks to help protect themselves and customers.

American Airlines announced Monday evening several enhancements to cabin cleaning, a new requirement that flight attendants wear masks, and the beginnings of an initiative to offer masks to customers on some flights.

Improvements to cleaning procedures will begin this week and will expand to all mainline and regional flights over time.

How Charlotte-area restaurants could be impacted by a meat shortage