A new tablet program inside the Mecklenburg County jail is connecting inmates, including those in solitary confinement, to their families and select media content. 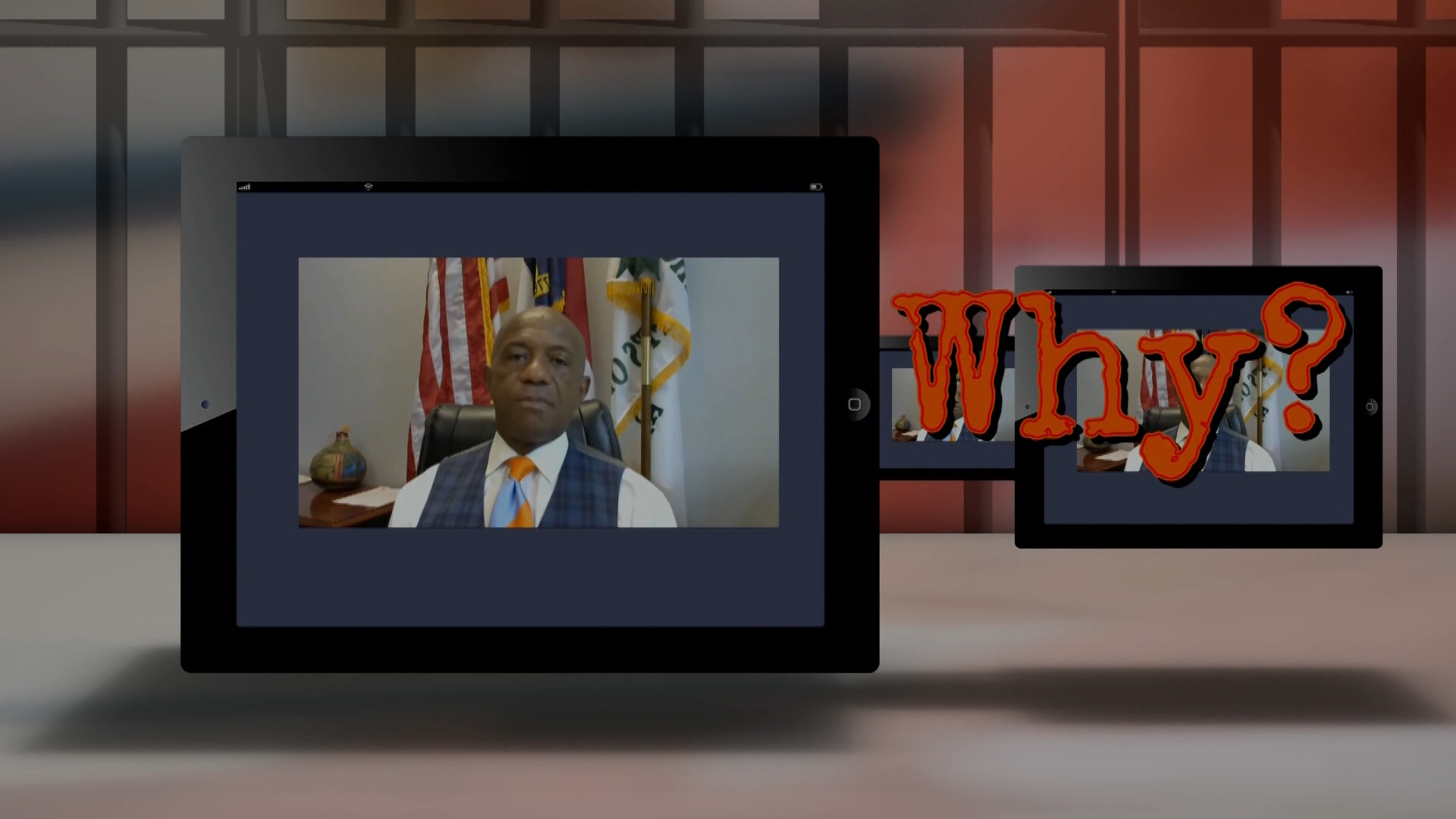 MECKLENBURG COUNTY, N.C. — As the coronavirus pandemic forced the world to go virtual, Mecklenburg County Sheriff Garry McFadden saw an opportunity for inmates awaiting trial to stay connected to the outside world. The jail has made it possible for inmates to make calls, message their families, read books, continue their education, plan for future careers, listen to music, and even watch movies using a new tablet program.

The sheriff believes the tablets are a secure way of helping prepare his residents for a return to the community as better people -- but some features of the new program are raising concerns.

The tablets, which the sheriff said did not cost the taxpayers any money, are available to any inmate who can afford them.

What you need to know about tablets inside Mecklenburg County jail

The content on the tablets is limited to music, movies, and books approved by the facility, according to MCSO. Inmates are also able to call and message approved family members.

GTL signed the contract with MCSO in September 2019, but wiring for the connectivity infrastructure, which was funded by the private company, was delayed due to the pandemic, according to the sheriff's office.

The sheriff granted inmates access in November and December of 2020. Those eligible inmates included residents in solitary confinement.

The current contract with GTL runs through December of 2022.

Inmates can only access the "secure" tablets within the housing unit and there is no internet access, according to MCSO.

GTL and inmate content subscriptions fund the program. All revenue goes to GTL.

Inmates are given one pair of "breakaway" headphones that can't be used to harm or strangle.

Why tablets were given to inmates

"We're trying to better those people while we have them here," McFadden said of his reasoning. "Do we just let them just sit there and they go back out broken? We're trying to just make them better citizens, better neighbors when they go back into the community. Yes, we will be criticized. Yes, people are going to talk about it, but bring me a better solution and help me better these men and women."

The sheriff, through GTL, supplied more than 1,300 tablets to inmates in late 2020.  McFadden said GTL, which worked with previous sheriffs to lay the groundwork for this technology, approached him with the idea of widespread tablet usage. The sheriff said the timing just made sense.

He said MCSO does not collect any of the money from the program by choice.

"We don't want any money from it," he said. "I think the taxpayers should understand, we're trying to better these people who are coming out."

He believes one way of bettering his residents is giving them access to their family.

"They can communicate with family," the sheriff said. "We try to limit it to particular people that they put on their call list and vet them out - and of course everything is monitored here."

McFadden said the network is highly secure and there's no access to the internet.

"It is a secure network that they can go back and forth and send messages to their families, but it's also for educational purposes," the sheriff said. "Do we think we have all of the kinks out? We don't know at this point. We're finding out what they can do and what they can't do."

The sheriff said he isn't aware of any security issues with the tablets thus far.

While the Fraternal Order of Police understands the sheriff's intentions, a spokesperson said the FOP worries about safety, who is accessing the tablets, and the message being sent.

"Anything like that can be hacked and we're worried that those security systems could fail," FOP Lodge 9 Public Information Officer Yolian Ortiz said. "Our worry is definitely security, that the tablets can be used to kind of continue that criminal activity. Knowing how sometimes governments work, a lot of this tracking is just not done or it's very minimal."

Prison tablets in other states, including ones created by GTL, raised security concerns in 2018.

The tablet policy, provided to WCNC Charlotte at our request, allows inmates to use the tablets and their wide-ranging content eight hours a day. Access is not just for those inmates in the general population. MCSO confirmed in May the residents in the Disciplinary Detention Unit, commonly known as solitary confinement, have access to the tablets too, despite the resident handbook prohibiting newspapers and magazines in DDS.

"If they've already broken the rules drastically to deserve that punishment, they shouldn't have a tablet," Ortiz said.

She said the FOP would like to see the tablets only offered to inmates on good behavior. Ortiz said while the FOP can see the benefits of the program, the organization wants the sheriff to track the program's successes and failures.

Lucille Puckett can see both sides too. Her son was murdered in 2016. Despite her grief, she believes the tablets served an important purpose during the pandemic.

"During the pandemic, we have to think outside the box," Puckett said. "That was a plus to keep (the inmates) kind of still connected with the resources they needed."

That said, now that life is somewhat returning to normal, Puckett believes it's time for the sheriff to take a fresh look at the program.

"The tablet situation needs to be re-evaluated," she said. "We want those people to still think about not wanting to return to jail."

The sheriff doesn't see the content on the tablets as luxuries or rewards. He believes they serve a critical purpose.

When pressed by WCNC Charlotte about tablet use in solitary confinement, the sheriff said MCSO plans on revisiting that issue. He's open to other feedback too.

"Bring me a better solution on what we need to do," the sheriff said. "If we have a better option that somebody can bring to me to better help my men and women here, then we'll listen to that option as well."

GTL, which receives all revenue from the program, told WCNC Charlotte the tablets and educational content that goes along with them will reduce recidivism. The company cited data that show "education has a proven and positive impact on reducing recidivism rates by 28%"

In their contract with Mecklenburg county, GTL lists the cost of resident content access at $0.05 per minute. They list the replacement cost of the tablets at $249, chargers at $8.99, and earbuds at $2.99.

Global Tel Link, which first started providing tablets in 2013, considers itself "a leader in transformative, secure, and integrated technology solutions for the corrections industry." The company's core mission is to improve "outcomes for both incarcerated individuals and corrections facilities through educational resources."

According to the company, 400,000 people in 44 states have access to tablets. The tablets allow free access to features like career planning and job search resources, religious content, educational resources and books so that incarcerated individuals "can be most prepared to reenter society positively and effectively." Inmates also have access to vocational training, anger management, and substance abuse courses through the program.

Residents may use multiple apps at the same time (i.e. listen to music while sending messages)

When available, the cost is $0.03 cents per minute

According to the sheriff's office, the agency has disciplined 46 inmates in the first six months for breaking or damaging tablets.